Thriller Simon Killer comes to DVD and Blu-ray in August 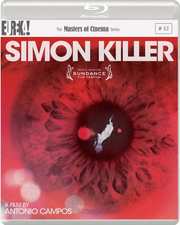 Presented in it's original 2.40:1 aspect ratio, extras will include behind-the-scenes and rehearsal footage from the production of the film, Sundance Alumni interview with Campos and producers Sean Durkin and Josh Mond, Campos’s Palme d’Or nominated short film The Last 15, The Case of the Conscious Camera 29-minute interview with Campos on the film's aesthetics, Conversations with Moms interview with Campos, Brady Corbet, and their mothers and trailer.

Also included is the now obligatory booklet with essay by critic Karina Longworth, a new interview with Antonio Campos, visual primer on the development of the poster art and more.

Simon is a recent college graduate full of promise and potential, who goes to Paris to begin a trip around Europe following a break-up with a long-time girlfriend. An outsider adrift upon a profound sense of loss, Simon takes solace in the company of Victoria, a beautiful, young, and mysterious prostitute, and their fateful journey begins.

Emotionally compelling and visually stunning, Simon Killer is an examination of casual brutality, profane sexuality, alienation, and desperation, all cut to a killer soundtrack that underscores the borderline psychotic fervour of Simon's descent.