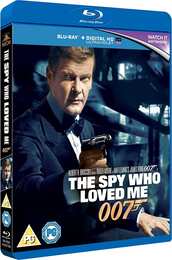 The Spy Who Loved Me (Blu-ray Details) 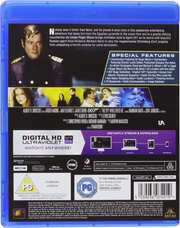 DVD
Spy Who Loved Me, The: Special Edition (James Bond) (US)

Review for The Spy Who Loved Me

I had set Saturday night for when I would watch The Spy Who Loved Me on Blu-ray, but channel hopping on Friday, I found that ITV4 were showing it. It left me with a dispirited feeling, had me asking what the point was. The point of course is high bitrate 1080p video as opposed to heavily compressed SD, lossless audio, as well as a disc full of extra features, as well as freedom from around 40 minutes of tacky adverts. There is also the fact that this isn’t the good old day of five analogue channels to hop through. It takes an hour to hop through the hundred or so free to air channels I have access to, and the likelihood of finding something and sticking with it is remote enough as to be impossible, as I’m always left wondering if there will be something even better on the next channel. By the time I’ve decided on a programme and clicked back, the end credits will have rolled, or it would have cut to a ten minute ad-break. All of that is why I almost exclusively watch DVDs and BDs these days, but I’m still left disappointed if something I plan to watch is broadcast on some channel within a few days either side of when I watch it on disc.

At the height of the Cold War, it’s impossible to even contemplate enemies working together, but that’s what happens when a Soviet nuclear submarine and a British nuclear submarine both go missing. The Russians assign Major Anya Amasova to the case, while the British assign James Bond. When they wind up butting heads in Egypt, trying to track down the technology that would allow someone to detect stealthy nuclear subs, their respective superiors decide it would be better if they work together. Their search uncovers a megalomaniacal scheme to reboot civilisation under the sea, but can agents XXX and 007 save the world when Major Amasova has reason to want James Bond dead?

The Spy Who Loved Me gets a 2.35:1 widescreen 1080p transfer, and you have the choice between DTS-HD MA 5.1 Surround English, DD 2.0 Surround English (if you’re looking for something approaching the original theatrical audio experience), and DD 5.1 Surround Spanish, and Portuguese, and DTS 5.1 Surround French and German, with subtitles in these languages and Danish, Dutch, Finnish, Norwegian and Swedish. I stuck with the lossless up-mix for the duration, and was happy with the experience, not excessively immersive, making the most of the action, while keeping the dialogue clear. This is the Bond movie where disco took over the music, but it hasn’t dated as much as I thought it would. The overall volume is a smidge low though. The image is clear, sharp, and with rich and consistent colours. There is no sign of visible compression, and the transfer offers excellent detail, making the most of the great production design and the location cinematography. The only nit to pick might be some crushed blacks in some scenes.

You get one disc in a BD Amaray with a UV code slipped within. The disc boots to an animated menu. On the disc you’ll find the following extras.

You get two commentaries, one with Sir Roger Moore, and one with director Lewis Gilbert, production designer Ken Adam, co-writer Christopher Wood, and Michael G. Wilson. Unlike most of the Bond crew commentaries, this isn’t a patchwork commentary.

The new featurettes are in Mission Dossier

Finally there are 9 Galleries in the Image Database.

The Spy Who Loved Me isn’t my favourite Roger Moore Bond film, but it could be the best Roger Moore Bond film, if that makes any sense. Just as The Living Daylights was a Moore script retooled for Timothy Dalton, Live and Let Die had a Connery sensibility to it. The Spy Who Loved Me is where Roger Moore really made the character his own, and where the blend of action, adventure and that camp, light comic tone epitomised by the Moore era worked best.

That pre-credits opening sequence, culminating in that audacious and outrageous base-jumping stunt with the Union flag parachute, still stands today as the best start to a Bond film. And then the credits that roll are Maurice Binder’s finest, with the most suggestive silhouettes ever put to celluloid, coupled with Carly Simon’s theme song... Again, it’s as good as Bond gets.

This is for me probably the last time that Moore’s Bond had any sense of menace to the character. You can still believe that he’s a cold-blooded assassin in this film, and for me that is an essential part of the character. It’s a good story as well, as while the Nemo-esque monomania of the villain, Stromberg is rather clichéd, at the heart of the film is the dynamic between Bond and Amasova, two rival agents from opposite sides of the Iron Curtain, forced to work together by circumstance. And then there is the recent tragedy that suggests that this is a working partnership that only one will walk away from, counterpointing the usual mechanisms of a Bond romance. Anything that can bring a touch of humanity to the usual fantastical storylines helps ground the film in some sort of relatable reality.

It is a rather ludicrous tale, with a wealthy megalomaniac looking to remake the world in his own image, very much a Nemo type with his love of the oceans, thinking that by engineering a nuclear war on land, he’ll get the seas all to himself, unsullied and unpolluted. He’s got the super-villain base, an undersea citadel that can rise out of the ocean at will, he’s also got an oil tanker large enough to swallow entire submarines, and he’s found an army of like-minded minions that will rally to his cause. And Bond gets the usual crazy gadgets from Q, including most memorably that amphibious Lotus Esprit, a car so far ahead of its time that I always think that this film was made in the eighties.

It’s also the epitome of the Bond travelogues, setting plenty of action sequences in the Pyramids and the ancient ruins of Egypt, partaking of plenty of the local culture as well. It’s an epic background to the film that is even more breathtaking in HD. And of course there is the best Bond henchman/comic relief in the imposing figure of Jaws, who here at least has the menace to match his gormlessness. About the only nit I have to pick with The Spy Who Loved Me is the descent to Carry On standards when it comes to the usual Bond innuendo. I keep expecting his quippery to be accompanied by a cheeky giggle from Barbara Windsor.

But as I said, this is the last of the Roger Moore films that got the balance between action, drama, and light entertainment just right. The pace is spot on, the action is really good, and the comedy, innuendo aside works with the film and not against it. It’s interesting to compare it to the next film, Moonraker, which is effectively a remake of this film, giving Bond a CIA female counterpart instead of KGB, and switching the setting from sea to space, with the megalomaniacal villain having the same damned plan. Moonraker got it all wrong, but The Spy Who Loved Me got it mostly right. This is the Bond entertainment that I grew up with, and it still holds up well today.