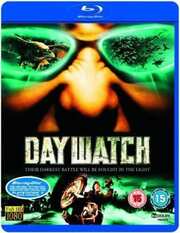 It seems a little redundant to take in the second movie of a trilogy that was never completed, but when you see both Blu-ray discs in a pound store, it’s not like you’re betting your bank balance at a roulette wheel. The first time I saw Night Watch, I was understandably awed by an audience friendly action fantasy from the Russian film industry, and I certainly enjoyed it enough to keep an eye out for the rest of the trilogy. However, I have to say that when I recently re-watched the first film on Blu-ray, I wasn’t as impressed. But then politics happened. The Russia that was reaching out to the world, wanting to play; an environment that allowed for the creativity behind Night Watch and Day Watch, vanished to be replaced by the Russia of today, that we know and are constantly frustrated by. You can’t imagine a film like Day Watch being made in Russia today, and it’s understandable that director Timur Bekmambetov just upped sticks and moved to Hollywood to make his movies where they were unlikely to be censured.

Things didn’t end well for Night Watch operative Anton at the end of the first film. He may have discovered his son, but the prophecy went bad when Yegor chose the dark side. Months later, he’s still working, looking for the dark siders plotting to break the truce between Light and Dark. He now has a new apprentice to train, Svetlana, the woman they previously encountered who might just be the opposite side of the prophecy, the light to Yegor’s dark. But she has a lot to learn. And meanwhile, Anton’s obsessing about an ancient myth regarding a mystical item, The Chalk of Fate that has the power to rewrite history.

The dark side and the light side continue to manoeuvre against each other, and when a dark sider named Galina is murdered, Anton is framed for the crime, and soon the Day Watch, the group that monitors the light siders for violations of the truce, is investigating and uncovering more evidence against him. The dark siders want retribution, and to keep Anton out of their clutches, he gets his body swapped.

Day Watch gets a Dolby TrueHD 5.1 Russian track, and DTS 5.1 Surround Russian, English, French and German, with subtitles in English, French, German, Danish, Dutch, Finnish, Norwegian, and Swedish. The image is presented in 2.35:1 widescreen 1080p format, and is clear and sharp, with the film coming across with clarity, with strong detail, and no sign of compression or the like. It’s a decent transfer of a recent film, so the only issues will be with the source, and for me, that comes with a couple of moments of lacklustre CGI. It’s certainly not as consistent in terms of production values as the first film, but when it’s good it’s really quite good. The audio is fine, the action comes across well, and the movie certainly feels immersive. The dialogue is clear, and the subtitles are accurately timed and free of typos, but the music is certainly forgettable.

You get one disc in a BD Amaray case, and the disc boots to a static menu.

You can see how the Watch trilogy was made to compete with the best that Hollywood could offer, as it comes across as not much more than a cross between the Matrix Trilogy and Lord of the Rings, with a little garnish of the supernatural, throwing in vampires, shapeshifters, and witches and warlocks as well. It’s a recipe for a successful franchise, but the cooking process didn’t quite work. The same complaints that I had with Night Watch are just as applicable here. It’s a convoluted, multi-faceted mess of a story that really can’t hold onto the tale that it wants to tell. It’s pulling in all directions, and despite all the colour and the richness of character, it all winds up drowned out by extraneous noise, so that it actually becomes a chore to watch.

The film starts off with an ancient flashback, a recounting of the tale of Tamerlane, as he sought the Chalk of Fate, a writing implement that would allow him to rewrite his fate. Flash forward to the modern day, and it turns out to be a story that Svetlana is now relating to Anton, and given the way that he lost his son to darkness at the end of the first movie, you can see why he would be interesting in rewriting history. There’s a bit of romantic thread developing between him and Svetlana too, but this is interrupted by an incident where a dark sider is preying on a human. They follow up on the report, only to find that the dark sider breaking the truce is Anton’s son, Yegor. In the mayhem, they grab one of his possessions, and it goes into an evidence locker. To protect his son, Anton has to act against the Night Watch and steal the evidence back.

His loyalties are being tested, and it gets even more complicated when he’s framed for murder and has to go on the run from the Day Watch. The Day Watch investigator is a femme fatale named Alisa, who has a passion for driving fast cars up the walls of buildings and gets into a relationship with Anton’s next door neighbour, the teenage vampire from the first film. And Yegor’s birthday is approaching, which is the next major milestone in the prophecy, which doesn’t bode well for the world. As you can see, it’s a story where you wind up breathless and disoriented, just trying to hold on for dear life.

The big question at this point is if the second movie is a good enough place to end, in a trilogy of films without a third movie. And actually it is. The clue’s in the plot, and you can see why a third film would be warranted if you want some kind of narrative satisfaction. But the second film does end on a whopping happily ever after reset button that does at least leave on a good note for the characters at any rate. Having seen it, I’m not inclined to lament the absence of a conclusion to the trilogy. Not that the films are good enough to warrant such an obsession.

Day Watch is another Twentieth Century Fox disc, and with the Disney buyout, it’s best to get it now while it’s still in the bargain basement of pound stores. There’s no guarantee that it will ever get a re-release on home video in the West. This Blu-ray release is solid enough when it comes to AV, even if it’s lighter on extras than the first film.