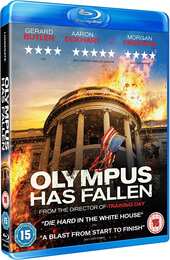 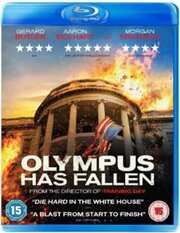 Review for Olympus Has Fallen

As I type this, it’s been four days since the US Election, and it’s an eternal truism that Americans can’t count. Seriously, how long does it take to count 200,000 votes? Political commentators at CNN are going on about a single provisional vote needing 20 minutes to count! At the moment, it looks like the old guy with the questionable past when it comes to race is going to beat the old guy with the questionable... well everything. And talks of lawsuits and conspiracy theories are coming out of the White House and the one thing that will be certain in this election is the current incumbent has no intention of leaving. What should have been an easy and quick process has every intention of stressing and depressing me until January 20th next year. When I think about the current president needing a few kilotons of persuasion to leave his current residence, I decided I needed something cathartic and appropriate to help me deal with my feelings. Fortunately I have Olympus Has Fallen on my to-watch pile, described as Die Hard in the White House.

You may be wondering why it wasn’t called something obvious, like The White House Has Fallen, but it turned out 2013 was one of those years where more than one studio had the same idea (see Robin Hood (1991), Christopher Columbus (1992), and Truman Capote (2005/6), and Olympus Has Fallen competes with the Emmerich movie White House Down. The latter had Channing Tatum and Jamie Foxx, while the former, this film, has Gerard Butler and has spawned two sequels as of 2020. That must mean it’s the better film, right?

With tensions on the Korean peninsula elevated, the White House of President Benjamin Asher hosts the South Korean leader for crisis talks. And that’s when terrorists launch an audacious and co-ordinated plan to attack the seat of Western democracy from land and air. An assault with military precision and planning overwhelms and quickly takes control of the building, and the president is taken hostage in his own bunker.

Mike Banning is a secret service agent who until eighteen months ago was the president’s most trusted bodyguard, but a tragic incident saw him moved to a desk job in the Treasury. He heads to the White House when the attack begins, and is the last man in before the terrorists take over, and it quickly transpires that he’s the last secret service agent left alive. Mike Banning is the only man who can save the president, and in the process save the free world.

Olympus has Fallen gets a 2.35:1 widescreen 1080p transfer with DTS-HD MA 5.1 Surround English and optional English subtitles. It’s not an impressive transfer to begin with. It’s obviously a digitally shot film, with all the drawbacks that ensue when it comes to contrast and black levels. Darker scenes tend to all blend into a hazy mush here, while the transfer introduces enough digital banding to catch the eye. This is also a film that was accomplished with a lot of green-screen work, with CG blood, and muzzle flashes galore. The audio is adequate, the opening attack on the White House is a bit of a surround overload, but once the film gets quieter, the action more one-on-one, then the surround audio really begins to shine. The dialogue, such as it is, is clear enough. The music starts off quite presidential in tone, but then descends to generic action movie.

You get 1 disc in a BD Amaray, and I found the second edition of Lionsgate’s “Opening Credits” 16-page magazine slipped inside, advertising more of their 2013 catalogue. The disc boots to an animated menu and you’ll find the following extras...

This nasty little movie did little to lighten my mood last night. Olympus Has Fallen may have been made in 2013, but its jingoistic insane blather encapsulates all that is wrong about the last four years in the USA in its two-hour run time. This isn’t an entertaining action movie; it’s high octane torture porn. It’s a brutal revelry of violence that has no redeeming qualities, it certainly doesn’t make the viewer feel good, or at any point induce a vicarious fist pump of victory when a bad guy is downed. It also forgets the fundamental rule of action movies, at least the action movies I like. They’re supposed to be fun, even funny. This film has one quip to its script, it saves it right for the end, and as the survivors wade through the blood and viscera of those fallen towards freedom, it’s not at all funny; it’s the worst taste moment in a film made in bad taste. It’s not even original. Watch Air Force One instead; or Mars Attacks.

They call this Die Hard in the White House, and they’re not subtle about it either, aping the first McClane vs. Gruber face off, and having its own “need more FBI guys” moment. The film may have computer generated sets, blood, and gunfire, but it feels like a computer generated script as well. Also plot holes are its raison d’être. You have to swallow a whole gallon of swill to accept a US security so thin to allow an army of terrorists within the vicinity of the White House with a heavily armoured transport plane, and military hardware, most of whom don’t even speak English. But you have to accept that to allow an entire army of secret service agents to be cut down in horrific ways (head shots abound in this film) leaving just Mike Banning alive.

It’s okay, as he was formerly a Ranger before joining the Secret Service, so he has the skill set that allows him to go hunting terrorists through the wreckage of the White House, brutally slaughtering and torturing his way to rescuing the president, who’s currently at gun and knife point in his bunker, having a bunch of nuclear codes tortured out of him, while his fellow hostages are being executed one by one. I should have gone with the Channing Tatum movie...

Make me laugh, make me smile, and make me care about the characters! Don’t make me think that they could have easily solved the problem by bombing the White House into oblivion and saving me at least 90 minutes out of this two hour trial. A dismal film gets a marginally acceptable Blu-ray release.