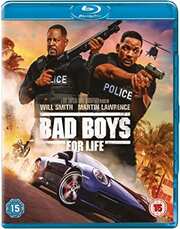 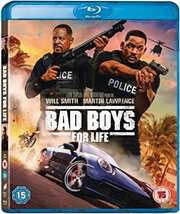 Review for Bad Boys For Life

When history looks back on this year, cinema is going to look pretty weird. That’s the least of our problems of course, but next year’s delayed Oscars promise to be rather sparse. At the rate things are going, 2020 in cinema is going to boil down to Bad Boys For Life, Tenet, Bill and Ted Face the Music, and a whole bunch of forgettable titles that went straight to streaming while the studios kept their tentpole titles back for the day the cinemas reopen to a vaccinated public. Those first three titles are the ones that I want to watch on Blu-ray this year. Bad Boys For Life actually came out before all this apocalypse began, and made it to store shelves on Blu-ray just as things were starting to lock down. I’ve had this disc for months now; I just wanted to get around to the first two films on Blu-ray before I watched it.

Over 25 years as partners is taking its toll. Marcus has just become a granddad and is ready to retire, but Mike is holding onto his youth and reminding Marcus of their promise to remain bad boys for life, partners till the wheels fall off. It’s not like their brand of police-work is necessary anymore, with the new hi-tech AMMO police team at the cutting edge. Then there is a prison escape in Mexico, a mother is reunited with her son, and she wants him to be the instrument of her vengeance against the Miami PD, and the law enforcement officials that got her drug-baron husband killed. Top of her list is Mike Lowrey. When things get personal, the bad boys will have to team up one last time for this case.

Bad Boys For Life gets a 2.39:1 widescreen 1080p transfer and you have the choice of DTS-HD MA 5.1 Surround English, Italian, and Japanese, along with DD 5.1 Surround English audio descriptive along with subtitles in these languages. The image is clear and sharp, and an action movie gets the usual orange and teal colour timing, along with added filtering to highlight the Miami feel, in keeping with the first two films. The film looks great, once you get past the orange looking skin tones, the action comes across well, is choreographed with an eye to keeping it coherent, and about the only nitpick might be a couple of moments of very obvious CGI in amongst a lot of practically shot stunts and action. The audio is great, immersive and effective with the action, while keeping the dialogue clear. A great decision was to revisit the score from the first film; Mark Mancina’s music was iconic, and it really makes for the franchise continuity that the second film missed out on.

You get one disc in a BD Amaray with an o-card slipcover. The disc boots to a static menu. This being a Sony disc, there is a bit of odd behaviour, including autoplaying the extras when the film ends, and a small menu bar popping up when the end credits start to take you back to the main menu if you choose.

These are the usual suspects when it comes to a suite of extra features, your standard EPK package. Incidentally Easter Eggs isn’t the laziest extra ever; it’s a look at the touches of nostalgia for the first two films in this new one.

This might be a little controversial, but I really do believe that Bad Boys For Life is the best film of the trilogy. Given how Bad Boys 2 was a complete and utter Bay-fest, that might not seem too much of a reach, but the first film, with Michael Bay constrained by a budget, was and is an iconic piece of 90s film nostalgia. It captured the mood and moment in such a way that I still love the film, so admitting that they’ve finally bettered it is something I was reluctant to do. Bad Boys For Life also had that hard task that so many sequels have, being original enough to stand alone, but also having enough nostalgia for the originals to make fans happy. Given the time that has passed, and the ages of the principals, Bad Boys 3 was also playing in a cliché field where you find films like the later Lethal Weapons, and given its story, a little bit of Beverly Hills Cop 3 as well, not good company to keep.

Perhaps the biggest asset on Bad Boys For Life’s side is that the director isn’t Michael Bay. This is probably the best, most emotionally resonant story yet, the action is on point and only really serves the story; nothing gratuitous like those car chases from Bad Boys 2, Best of all, and something that neither of the previous films achieved, is the way this third film makes the comedy integral to the story. The characters are still as vivid and witty as ever, but the humour flows from the situations. Even the first film would stop the action to let Martin Lawrence or Will Smith have a funny bit, and things like the ‘Tropical Fruit Bubblicious’ and the ‘quality time’ would feel tacked on (in some cases they were).

We really are in Lethal Weapon territory with the characters, with Marcus Burnett really ‘too old for this s***’ while Mike Lowrey trying to will himself to stay young and fit enough to keep running down bad guys. To their credit, they both look their ages in the film although Martin Lawrence looks both his age and Will Smith’s age added together, while Will Smith has that Dorian Gray portrait in his attic that so many movie stars have. Age certainly is an issue, with Marcus re-evaluating his life after the birth of a grandchild, and deciding that seeing the kid grow up is more important than getting in gunfights every day. Mike wants to keep on fighting bad guys, but with the hot new Turks in the department, and other reminders of his age (the scene where they go to a nightclub is a case in point) you get the feeling that the world is telling him to grow up and act his age.

A host of familiar faces from the first two films also make appearances here, including Joe Pantoliano as Captain Howard, and most of the Burnett clan, and the interactions between these characters are just as funny and charming as ever. But then there are the villains and the threat that they pose, and compared to the limp antagonists of the previous film, in Isabel Aretas, we have a villain more psychopathic than Fouchet in the first Bad Boys, and in her son Armando, we have a killer more lethal and effective than Jet Li’s character in Lethal Weapon 4, and even more of a challenge to the two heroes. Isabel has a fire for vengeance that seems irrational to the point of insanity, and she brooks no argument; and she has a relationship with her son that borders on the unhealthy. In terms of action and violence, Bad Boys For Life is actually a little stronger, a touch more realistic than the first two films. Although thankfully it avoids the bad taste of the second.

The action is better than before, the characters are just as much fun, and the comedy is the best that it has ever been. Best of all, the story has a lot of heart to it, and if you ignore the continuity goofs (the trilogy’s chronology doesn’t add up), you can invest in the characters’ journeys in a way that the trivialities of the first two films precluded. That you’ll have a good time watching Bad Boys For Life is a given; that you care about what happens to the characters is unexpected, but a pleasant surprise. The extras are as thin as you’d expect, but the quality of the transfer on this disc is top-notch. At least one of the three big movies of 2020 is well worth owning.