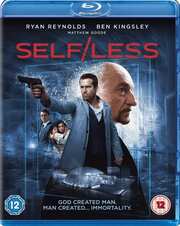 A few years ago, I reviewed a John Frankenheimer sci-fi thriller from the sixties called Seconds. Starring Rock Hudson, it was an inventive film which introduced a sci-fi concept that didn’t break the budget; that of second identities. A tired, middle-aged businessman got a new life as a young, bohemian artist through a medical miracle, but as soon as he looked that particular gift horse in the mouth, his new life started falling apart. It’s a pretty nifty concept which in Frankenheimer’s hands was executed to stunning effect. At the time, I wondered why such a compelling idea had not been revisited. It just goes to show how out of touch I am with modern Hollywood. For in the year that the Seconds Blu-ray was released in the UK, this film, Self/Less also came out, and for much of its first act, it feels like a beat for beat remake of Seconds, albeit with modern special effects.

Damian Hale is a 68-year-old property tycoon, influential and powerful, and of course rich. He’s also dying of metastatic cancer. But there is a service for the most important minds, and Hale is contacted anonymously with an offer for a new life, a new body; practical immortality. It would mean shedding ties completely with his old life, but for someone unable to appreciate the ephemeral immortality of his legacy, it seems like a good deal.

He wakes up in a new lab-grown body and with a new identity, Edward Kidner. He’s also given a course of anti-rejection drugs, to keep his mind integrated in his new body. As he’s getting used to his new life, he indulges in New Orleans’ hedonistic night life, and that leads him to miss a pill. The hallucinations that result are memories... someone else’s memories.

Self/Less gets a 2.35:1 widescreen 1080p transfer on this disc, with DTS-HD MA 5.1 Surround English audio and optional English subtitles. The image is clear and sharp, and offers no issues to pick nits at. The special effects are sparingly used and the film is more noted for its stunts and action, which are all accomplished effectively. The look of the film veers towards the realistic; this is very much a sci-fi set in the modern day, while the colour palette and timing is shifted slightly to the cool side of the spectrum. The audio is great; the action comes across well in the surround while the dialogue remains clear throughout.

You get one disc in a BD Amaray and the film autoplays trailers for Woman in Gold, Southpaw and Burnt before loading an animated menu.

Self/Less really does feel like Seconds at first. Sure, the motivation between Damian Hale’s choice is more tangible that the original film protagonist’s ennui, with a terminal disease a lot more emotive a motivation. But he meets the same kind of ambiguous professionalism from his ‘saviours’, a list of rules to follow in his new life, and a couple of vague warnings. It comes as no surprise then, that when he indulges his hedonistic side in New Orleans as he gets used to life as Edward Kidner, that the ‘company’ keep an eye on him as he does so. Of course when Hale breaks the rules for much the same reason as in Seconds, he disturbs an ants’ nest, and winds up paying the consequences.

It’s here the film diverges from Seconds, although that divergence is set up in the film’s premise. Here it isn’t a miraculous rejuvenation that saves Damian Hale; it’s an actual body-swap, with an MRI looking gizmo out of Star Trek used to transfer his mind into a new, blank body. At least that is what he’s been told; that the Ryan Reynolds body has been grown in a lab and is a blank slate. But when he forgets to take his anti-rejection medicine, he hallucinates a memory so vivid, real, and alien to him, that he winds up investigating the image, and learns that his new body had a past, and that the company have been less than truthful.

When he goes looking for his body’s original identity and past, he finds a grieving widow and a daughter, and he endangers them too, as the company can’t have its secrets revealed. Fortunately for him, it’s not just hallucinatory memories that he’s inherited, the body’s previous owner served in the military, and Hale now has his muscle memory as well, allowing him to kick ass in a way that no property tycoon ever could.

I was surprised by Self/Less. I thought that it would take the Seconds premise and modernise it with some gratuitous action and violence, while dumbing down the premise. The violence and action is there, but certainly not gratuitous in a film with a 12 rating. But this is an action thriller more than it is a psychological thriller. Where it stands out is in the premise, as it goes a step further than Seconds, and asks questions about identity, about the soul, and of course the rightness or wrongness of people wielding godlike powers. Transferring consciousnesses is a form of immortality as described in the film, a questionable concept when the new body is a blank slate; but here it turns out that the body had a prior owner. Damian Hale goes on a journey in this film, from a jaded businessman afraid of death, willing to use his chequebook to solve all his problems, to someone who connects with humanity and has a moral compass. Self/Less may be an action movie, but it has an emotionally resonant core to it that gives it some depth, and makes it a film worth revisiting.

The Blu-ray is of great technical quality as always, but the extras are less than perfunctory. It’s still well worth seeking out though.