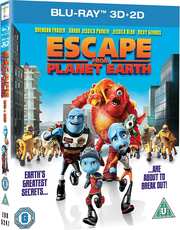 Review for Escape From Planet Earth

I am so far removed from my childhood at this point that I have no way of telling what is a good kids’ movie and what isn’t. They all seem to follow the same templates though, adventure stories made as 3D CG animations, with ‘name’ voice casts, and plenty of ‘wink to the screen’ humour to keep the adults interested while the kids marvel at the pretty colours. The bottom line only becomes clear when they premiere on TV. Are they there just after the Queen’s speech on Christmas Day on BBC1 (a slot traditionally owned by Pixar), or will they be shunted to BBC2 on a random Sunday morning somewhere in October? It’s October now; let’s see if I picked the right time to watch Escape From Planet Earth, or if I should have left it till Yule?

Brothers Scorch and Gary Supernova are a great team. Scorch is the lantern-jawed hero adventurer astronaut who travels through the universe derring-do all the way; while Gary backs him up at mission control. Alas the accolades and the respect go the way that you probably expect, with fans adulating Scorch, while Gary gets sidelined as a geek.

Then one day, as their brotherly relationship is falling apart, a distress call comes in from the Dark Planet, a world from which no adventurer has ever returned. Scorch thinks that he can handle the mission alone without Gary’s back-up, but the last they see of Scorch is him being captured. It’s up to Gary to save his brother and the day but he too lands in deep trouble and the middle of a galactic conspiracy. Captured and taken to Area 51, it’s up to Gary to escape from planet Earth.

This is a 3D/2D release with both versions on one disc. For the purposes of this review I watched the 2D version. Although I’m hard pressed to explain why the runtime of the film is just over 84 minutes when the BBFC website has it at 89. As far as I can tell, nothing is egregiously absent, and there are no plot holes suggesting five minutes of cuts, and it’s certainly not PAL speedup!

According to the blurb on the case, the 2D version is presented in 2.40:1 widescreen 1080p and the 3D is in 2.35:1. I guess this means that this disc doesn’t use the expediency of just using one eye’s image as the 2D presentation, but genuinely has the film on the disc twice. The image is as clear and as pristine as you might expect from a 3D CG animation. Detail levels are great, colours are impressive, and the animation is smooth. However I did notice some digital banding in darker scenes that was less impressive.

The sole audio track on the disc is a DTS-HD MA 5.1 Surround English track with optional English subtitles. The audio is great, the action comes across well on the surround soundstage, and the dialogue is clear throughout. The actors are well suited to their roles, although Ricky Gervais does pop up in the oddest of places. About the only nit I have to pick is with the overdose of boy band warbling that passes for a music soundtrack in this film.

You get one disc in a BD Amaray, wrapped in an o-card slipcover. The disc autoplays trailers for Planet 51, Animals United, and The Harry Hill Movie before booting to an animated menu.

On the disc are the following extras.

The Making of Escape From Planet Earth (21:13)... more of the voice cast than anything else.
Alternate Takes & Deleted Scenes (3:52)
How to Make An Animated Feature with Director Cal Brunker (3:41)
Delta Rae Performs “What Matters Most” (3:54)
Owl City Music Video “Shooting Star” (4:14)
Cody Simpson Featurette “Shine Supernova” (2:42)

It’s not a good start to any film these days when it turns out to be produced by the Weinsteins. Whether putting that opening logo out of my mind actually delayed my first laugh or not is another matter, but it did take over half of the film before my visage cracked. It was a rare laugh though in this film. Escape From Planet Earth achieves what it sets out to, to tell a vaguely entertaining adventure story in a vaguely entertaining way, without doing anything that might be memorable, striking, different, or just unprecedented enough to make it stand out above its peers. It’s a by the numbers kids’ action comedy with a tired script and clichéd characters. It’s just the sort of movie you’d want on a Sunday morning in October when you just want the kids out of your hair for 90 minutes. But if this film turned up on Christmas Day, harsh letters would be sent from Tunbridge Wells to Points of View.

It’s just that the characters aren’t really memorable enough. You certainly wouldn’t go looking in any toy shops for models. While Scorch and Gary are easy to differentiate, the rest of their race is less variegated, and the three women in the movie differ in appearance in terms of costumes, and the colour of their head-fins, but little else. There are about three recognisable human characters in the film, the rest all wear identical haz-mat suits, and there are six other alien characters in the film, three of them identical from other worlds. While the animation is fluid, the world design detailed and impressive; in terms of characters the film seems to be done on a budget.

The story too unfolds so predictably. You have this sibling rivalry between the hero and the geek, not helped by Gary’s son Kip idolising his uncle. When Scorch goes missing, it’s time to heal those family rifts, and Gary goes to rescue his brother. Of course reuniting is one thing, they have some issues to work out on the way too. This whole thing is motivated by an evil general on Earth planning to wipe out all aliens. He’s doing this by capturing aliens and forcing them to invent all manner of technology on Earth, culminating in a giant, planet destroying gun, for which he needs a reactor from Gary’s home planet; hence the conspiracy. So not only does it mean saving his brother, they have to save the universe as well, and the only help they have comes in the form of the quirky aliens that the general has captive.

There are plenty of gags and references along the way, some of which even got me to smirk, but I doubt that they will hold adult attention for very long. Escape From Planet Earth feels very tired at this point. Even if you haven’t seen it before, you’ll feel as if you have. Kids will enjoy it though, as long as they see it before any Pixar movies when they’ll have something better to compare it to. The Blu-ray is good enough to watch, although it’s a shame about that banding.