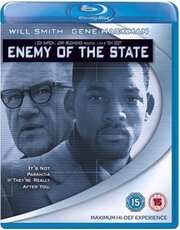 Enemy of the State (Blu-ray Details) 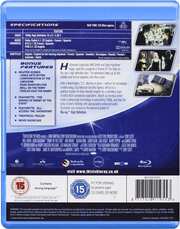 DVD
Enemy of the State (UK)

Review for Enemy of the State

For the second time in as many reviews (from my perspective), I’ve made a mistake in the pursuit of a double dip. Upgrading a DVD to a Blu-ray should be a painless experience, especially for a cinematic feature film, but once more I’m disappointed by the result. This time the pain is at least mitigated by the price I paid for the disc. Yes, the Enemy of the State Blu-ray was a Poundland jobbie. Jerry Bruckheimer produces, and Tony Scott directs, as the eighties action movie meets the 21st Century tech thriller.

Robert Clayton Dean is a lawyer navigating his way through life with apparent ease. That’s despite taking on the kind of labour case that gets his life threatened by the mob. His happy family life hides an indiscretion in his past, and worse, the only contact he has with the investigator he uses in his cases, is the woman he cheated with. But when he bumps into an old college friend, and that friend is subsequently killed in a traffic accident, it’s the point where his life starts to fall apart.

For that old friend witnessed a crime that elements of the US intelligence agencies will do anything to cover up, and they now think that the evidence got passed on to Dean. 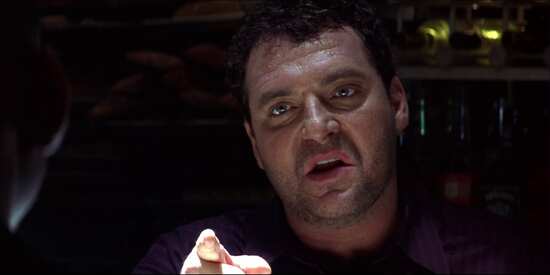 Enemy of the State gets a 2.35:1 widescreen 1080p transfer, with PCM 5.1 Surround English, as well DTS 5.1 Surround Spanish and French, and Dolby Digital 5.1 Surround English, Spanish and French. The disc defaults to Dolby Digital, so you’ll have to remember to switch to the uncompressed audio while the film is still shooting logos up on the screen. Subtitles are available in English, French, Spanish, Icelandic, Norwegian, Swedish, Finnish, Danish, and Dutch. The audio is fine, great, the surrounds put to excellent use conveying the film’s action and music, and when there are this many surveillance helicopters flying overhead, you need the good sound design. But the film falls apart when it comes to the video. This disc uses the same source as that aged DVD, identical down to the print damage and slight flicker. There’s a bright blue scratch in the print at 1:26:43 that is also present on the DVD at the same point, correcting for PAL speedup. Sure the HD transfer is sharper, and there’s more detail, but the film has been treated to the full barrage of post-processing. It’s shorn of grain, subject to DNR, skin tones are waxy, and blacks are crushed while whites are blown. They did all this, but couldn’t clean up the print or fix the damage. Enemy of the State demands a 4k re-master.

You get one disc in a BD Amaray. The one advantage this release has over the old UK DVD from 1999 is extra features, although the fact that it feels like I’ve seen all of these extras before indicates just how ephemeral and uninformative they are.

The disc autoplays with a generic Buena Vista BD trailer. The film then plays automatically on a loop. There is no main menu screen, and you’ll have to navigate with the pop-up menu.

The most pointless extra ever is the Movie Showcase, basically three clips from the film on the disc which in total lasts 5:40. Why?

There are four Deleted Scenes lasting 5:45.

The Making of Enemy of the State lasts 29:14 and features the usual interviews with cast and crew.

All Access: The Showdown offers 13:19 of B-roll footage. The last three extras are presented in 1080i 60 Hz but scaled up from SD.

Finally there is the theatrical trailer in HD.

I never thought I’d say this, but Enemy of the State is quaint. It’s outdated and it’s no longer relevant. But it is still an entertaining action thriller and it does still feel a fair bit smarter than the subsequent tech thrillers that followed in its footsteps; perhaps because it manages to develop its characters in its genre limited confines in a satisfying and compelling way. Most films of this ilk are all about the action and maybe the concept, but here it is the characters that drive the action, which makes it one of the more memorable films from its era.

But it is a film out of time. Enemy of the State was a cautionary tale from the end of the 1990s about the public sacrificing their privacy for the sake of national security, how we expect our intelligence services to protect us, yet are shocked when they use underhand means to do so. That was then. Today, we willingly sacrifice our privacies for the sake of convenience. The battle has been lost. There’s a bit in the extras where they talk about how easy it is to add an amplifier to any speaker to turn it into a listening device. Welcome to the 21st Century, where our phones are always on, where we talk to smart speakers, there is audio and cameras in our laptops, in our tablets, in our TVs, in our fridges, all to make things simple for us, and we sign away our lives without reading the small print every time we download some bit of software, all so Facebook and Google can serve us the ads that they think will suit our needs at any given time, where our Twitter feeds are shaped to conform to our perspectives, and where foreign actors can insidiously try to shape our opinions to effect political change in our country to benefit their own.

Enemy of the State doesn’t seem so fantastic now! Actually it still does, as it follows the Hollywood rule book when it comes to computers and technology. I couldn’t help but tell the film where to fornicate when it did the whole video-camera surveillance thing, picking up one image of a suspect, and the tech geeks rotating around the subject by 45 degrees or whatever (they hadn’t invented drones yet) and doing the old Blade Runner style zoom-in and enhance. If imaging technology worked like that, I’d have never bought a single Blu-ray. I’d have ‘enhanced’ all my VHS tapes. 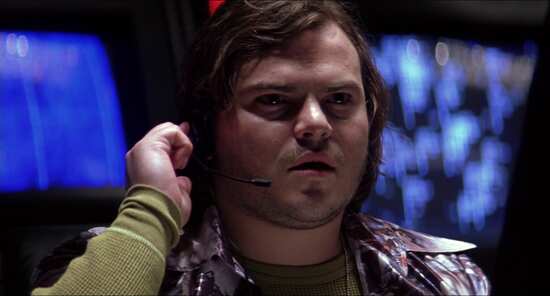 You have to take that with a pinch of salt, and remember that the last time a character looked authentic using a computer in a Hollywood movie was probably Matthew Broderick in Wargames. That said, Enemy of the State is most importantly, still fun. It’s an entertaining thriller with great performances and with some very well put together action sequences. The pace is spot on, and you can really invest in the main character’s paranoia as the deep state closes in. The cast is also noteworthy, in that it’s a who’s who of acting talent for names that would become more established in the next decade, actors like Seth Green, Jack Black, and Jason Lee and so on. But above all this is a Bruckheimer movie, so also expect milk-curdling clichés. Kudos to Gene Hackman for getting the “You’re either really stupid or really smart” line out and making it halfway believable.

The film is still fun, but it really is showing its age, which is a coincidence as I feel the same about this quick, ‘grab the cash’ Blu-ray disc where the creaky transfer fails to do justice to the movie.