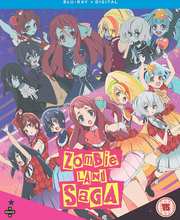 I’ve recently been watching Plastic Memories for review, and have been lamenting the lost opportunity, the sheer lack of finesse in the way that two completely different genres were simply slammed together, and presented to us as a messy and fragmented fait accompli. A cyberpunk sci-fi romantic comedy could have worked... maybe. Anyway, I then went to the top of my review pile and picked the next anime show for review, looked at the title, and settled in for another in a long line of zombie shows, hoping that anything would be better than the last such show I watched, Calamity of a Zombie Girl. And it turns out that Zombie Land Saga is another genre mash-up, and this time taking two genres that are even more antithetical than a cyberpunk rom-com. Someone had the idea to put a zombie show together with a music idol show, a sort of Love Unlive for want of a better description. I hope that Zombie Land Saga is put together more deftly than Plastic Memories... 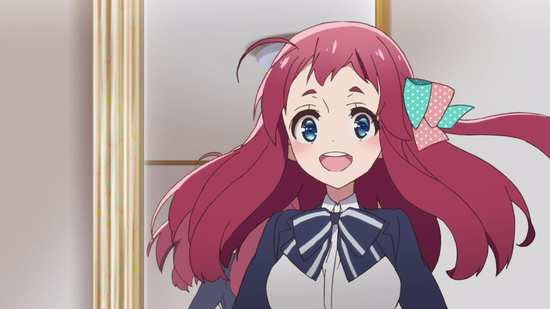 Sakura Minamoto has it all. A bright, bubbly personality, enthusiasm for starting the second year of high school, and she’s got dreams of being an idol, her sights set on an audition. In her enthusiasm for school, she runs out of her house in the morning, and straight into the path of a truck. 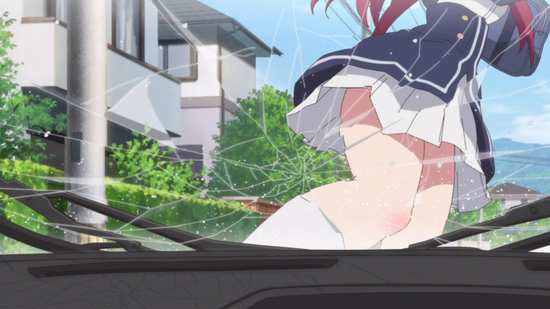 She wakes up in a creepy mansion ten years later, surrounded by zombies. That’s enough to make anyone freak out, but what’s even freakier is that she’s a zombie as well. The only one who isn’t is a crazed music producer named Kotaro Tatsumi. He’s somehow brought back talented girls from throughout history, to put together a girl idol group. His ambition is to use the group to promote Saga Prefecture, where they all now currently reside. Being zombies shouldn’t be a problem, as Kotaro’s a talented make-up artist as well. Figuring out how to dance without bits falling off, now that’s the challenge! 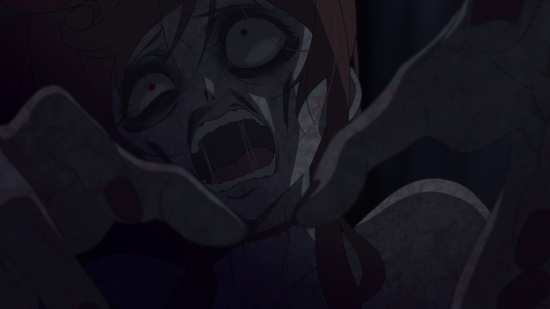 12 episodes of Zombie Land Saga are presented across two Blu-rays from Manga Entertainment.

Disc 1
1. Good Morning SAGA
2. I &lt;3 HIP HOP SAGA
3. DEAD OR ALIVE SAGA
4. Warming Dead SAGA
5. The Nice Bird SAGA In Your Heart
6. Because it’s Sentimental SAGA
7. But it’s Zombiemental SAGA
8. Go Go Neverland SAGA
9. Though My Life May Have Ended Once by Some Twist of Fate I Have Risen, and If Song and Dance Are to Be My Fate, Then Carrying the Memories if My Comrades in My Heart As I Sally Forth Shall Be My SAGA 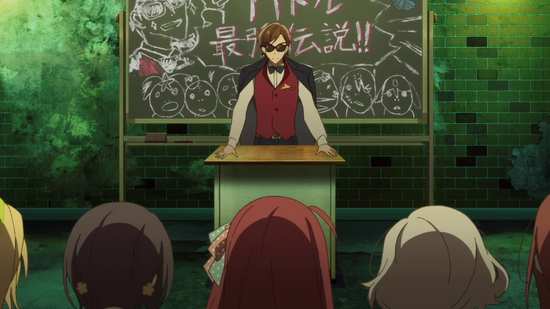 Zombie Land Saga gets a 1.78:1 widescreen 1080p transfer on these discs. You get a couple of my anime bugbears with this show, a consequence of the genre mash-up. The zombie side of things indicates a darker aesthetic, especially early on, and repeatedly in the basement of the mansion, and hence there is a little more in the way of digital banding than in brighter shows. From the idol side, you get the production choice of switching from traditional 2D animation to 3D CGI whenever the group is performing on stage. 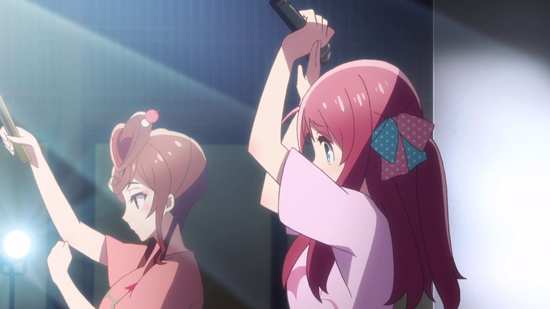 The image itself is really quite nice, marrying the horror elements of the zombie idols with the cutesy moments you’d expect from a comedy show such as this. In essence, each of the characters gets two designs, one in their undead ‘naked’ form, and how they appear as humans, either in flashback or in make-up. The animation is smooth and energetic, and the quality of the animation, the level of the production design is very appealing. 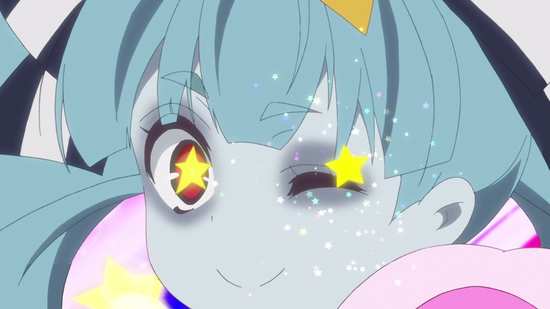 You have the choice between Dolby TrueHD 5.1 Surround English and 2.0 Stereo Japanese with optional translated English subtitles and a signs only track. The discs are front-loaded with a note that the songs remain in Japanese on both versions. I gave the dub a quick try and didn’t quite appreciate the voice actor performances for the main characters, and by far preferred the original Japanese in this case. The stereo is good enough, bringing the action across well, while keeping the dialogue clear. There is a fairly broad choice of music in the show, even when it comes to the songs that the group sings, and most of it is nice and catchy. The subtitles are accurately timed and free of typos. 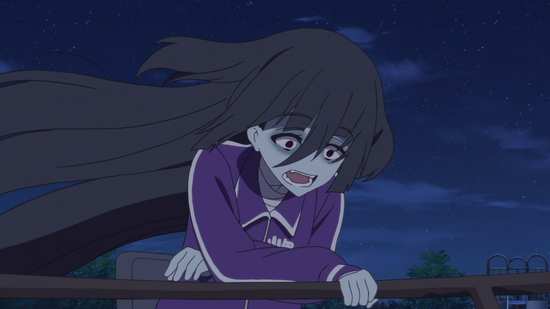 Disc 2 has the textless credits. 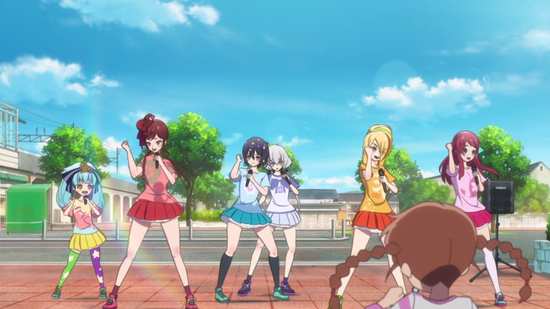 There are countless idol anime shows out there, Love Live and Bang Dream to name just two, and while I might have initially been lukewarm on the idea, the concept has grown on me to the point that I’m importing shows that haven’t had a UK release. With Zombie Land Saga, I may just have a new favourite idol franchise, assuming they ever make more. The idea of mixing these two genres, zombies and idols is a genius move, injecting a dose of anarchic absurdity into what is on the surface a pretty safe and formulaic concept. 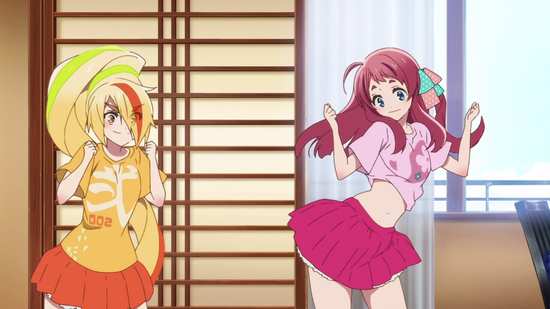 Sakura Minamoto is killed in a traffic accident, and is then resurrected ten years later to be part of a girl idol group, also made of zombies, put together to enhance the reputation of Saga, a backwater prefecture in Japan. There are no idols worth their salt there to do the job, so Kotaro Tatsumi, a promoter with a lunatic personality decides to create a group by raising dead celebrities from throughout history, and putting them together in the group called Franchouchou, and setting them on the climb to stardom. Their zombie natures are concealed behind make-up when in performing to stop the general public from finding out, and they go by numbers instead of their original names. 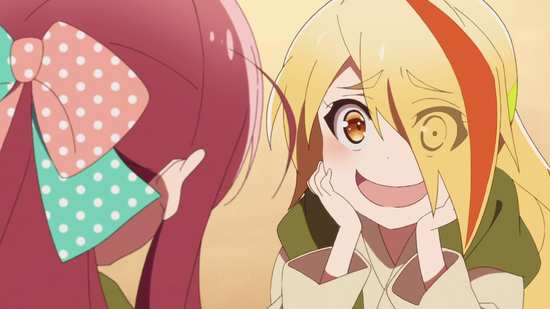 There is an interesting conceit here, that the zombies when first raised, are like the traditional lumbering, brain-eating monsters of the movies, before their personalities are reawakened. Sakura is the first to wake up, to a room full of six other scary zombies, and she quite understandably freaks. It isn’t long before the others, Lily, Saki, Ai, Junko, and Yugiri also awaken. But one of the girls, Tae never does, and she remains the stereotypical brain eating zombie throughout. The challenge, and a source of comedy is getting her to be part of the group regardless. 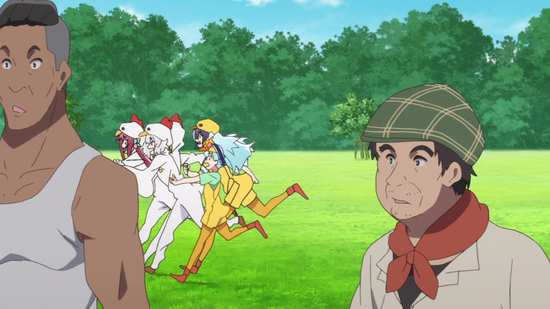 The girls were all idols or similar when they were alive, albeit at different times in history, and part of the show’s narrative, and drivers for the individual episodes is that they have to reconcile their past when they were alive with who they are now. There is also something of an over arching narrative mystery for the show, as of all the girls, it seems that Sakura is the one resurrectee who hasn’t had a famous or infamous life. She’s also the only one (aside from Tae) who doesn’t get her memories back. It also seems that of all the girls, Kotaro picks on her and torments her most during their training sessions, and his harebrained pep talks. This leads to the finale of the series, where the truth about Sakura is revealed, and it’s her turn to reconcile with her past life. 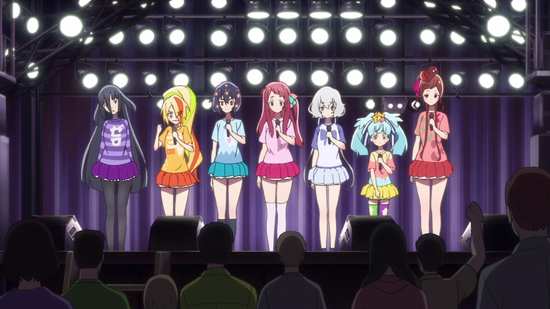 Like so many shows, Zombie Land Saga ends on an open note, hoping for a second season (I believe a second is in production), but in this case it does enough in these twelve episodes to satisfy and leave you feeling entertained. I really loved this macabre, dark comedic take on the pop idol music genre, and found these episodes to be a delicious diversion for its run time. If the show has a weakness, it’s that Kotaro’s over the top enthusiasm can slip over the edge from comedic to grating annoyance, but he’s really the crazy edge to the show that justifies its premise. You can’t have a group of zombie girls singing and dancing on stage without a mad scientist Svengali behind the scenes. Zombie Land Saga is well worth checking out.