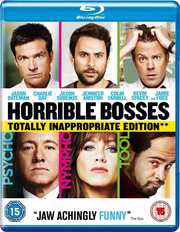 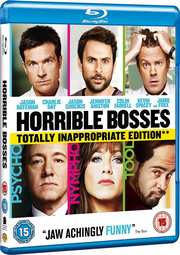 I’ve been catching up on my mainstream Hollywood cinema of late, although not in any discriminating way. I’m just taking advantage of the bargain bucket prices that some Blu-rays can be had for now, and generally picking titles that I’ve heard of, might have seen trailed, or just seem as if they might have made an impact in the last ten or fifteen years. There’s a lot that you miss out on when your entertainment of choice comes from a completely different continent. Still, I’ve never had the best of luck when it comes to Hollywood comedies. I tend to find them crass and cringe-inducing. I want to laugh, not feel uncomfortable. The last US film comedy I had spinning in my Blu-ray player was Police Academy 7. Compared to that, Horrible Bosses has to be better, right?

Nick works in an investment firm, and thinks he’s on the right track to promotion, but years of kissing up to Dave Harken result in a slap in the face and constant abuse. Kurt’s boss was an angel, a man among men, the best boss in the world. But then he died and his son Bobby Pellit inherited the company. He’s a coke addict intent on embezzling the company into the ground to feed his habit. Dale is a dental assistant. The dentist, Julia Harris is an insatiable nymphomaniac who keeps harassing Dale, despite the fact that he’s engaged to his girlfriend. Nick, Kurt, and Dale are lifelong friends who during a drunken commiseration session come up with the idea of killing their bosses. When they sober up, it still seems like a good idea, but the problem is that they have no experience, don’t know where to begin. They’re going to need help.

It’s a fine transfer of a recent film .You get a 2.40:1 widescreen 1080p presentation on the disc, with the choice between DTS-HD MA 5.1 Surround English, Dolby Digital 5.1 Surround Spanish, French, Italian, Thai, and English Audio Descriptive on the Theatrical Version. You only get the English surround track on the Extended Version. Subtitles for these languages plus Danish, Dutch, Finnish, Korean, Norwegian, Swedish, Cantonese and Chinese are common across both versions. The image is clear, detail levels are good, and colours are rich and consistent. There is no sign of compression, aliasing, banding or the like, while the audio does well enough with the comedy material, with the real surround emphasis applied to the music choices.

You get one disc in a BD Amaray. It autoplays a trailer for Harry Potter and the Deathly Hallows Part 2 before loading a static menu.

On the disc you’ll find the following featurettes and extras.

I wasn’t moved to watch any of the extra content this time around.

Horrible Bosses got a sequel! How’d it get a sequel? It’s not better than Police Academy 7; it’s worse, much worse. It’s what I expect from modern Hollywood comedies, crass, juvenile, and reliant on toilet humour. Admittedly, I wasn’t in the ideal mood to watch a comedy; I sat there stone-faced, arms crossed, daring the thing to entertain me, but even in that mood, it isn’t long before something good will have me wheezing with laughter. This isn’t exactly Laurel and Hardy.

It wasn’t until the halfway mark before my visage cracked a smile, and it didn’t have much to do with the film. I was sitting there, wondering what other similar film I could be watching right now, what black comedy I ought to see instead of Horrible Bosses. At that point in the film, the trio were discussing their plan, and they referenced the very film that I was thinking of at that moment. I simply had to exhale a chuckle at that coincidence. While the floodgates didn’t open, a little trickle of humour began to drip from the overflow pipe, and in the second half of the film, I might have smirked more, smiled a little, and I do remember laughing at least twice. That’s a pretty bad hit rate for a deliberate comedy.

I think part of the problem is that what should have been a black comedy is played pretty much straight. You have three men plotting to kill their respective employers, and that should have been dark, it should have been laced with irony, and it should have been edgy and uncomfortable. Instead, Horrible Bosses is as middle of the road as any mainstream comedy, and the idea of rooting for three people planning to commit murder seems pretty crass when it’s mainstream. I complained about this recently when I reviewed Limitless, this reflection of society where success by any means is justifiable, which also applies here. Done with irony, done with consequences makes it funny, but played straight reveals a moral compass that is out of whack.

Another thing that I find hard to take is the Jennifer Aniston character, Julia Harris the nymphomaniac. Maybe there’s comedy value in hearing her spout dialogue more apt in a porno, but I failed to be tickled by the idea. More importantly, and a telling indictment on modern society, is that it was hard to see the problem with her harassment of Dale. It’s a sad fact that when it comes to sexual assault, female on male crime tends to draw smirks rather than outrage, and while the film accurately reflects that attitude from Dale’s friends, it does nothing to dispel that attitude in the audience. Instead it still feels like the male wish-fulfilment fantasy that it is. That the good dentist is easy on the eyes to begin with might be one thing, but it also could be that Dale’s humiliation wasn’t explicit enough to warrant his reaction.

A few years ago, I might have suggested that a way to solve this problem might have been for Jennifer Aniston and Kevin Spacey to swap roles, but it turns out that would have been a case of art imitating life. And let’s draw a delicate veil over that idea.

Horrible Bosses just didn’t work for me. It’s just not funny. That it made get me close to the verge of being entertained might be a reason to give it another chance in a good while, maybe when I’m more amenable, but right now I’m too depressed at the thought at just how this film mirrors modern society. Is this what the human race is coming to? Just when I think I may be able to utter the word ‘Hollywood’ without spitting... Incidentally, that film I was thinking of, the one that the characters quote as inspiration for their crime is Throw Momma From The Train. Seriously, watch that instead.