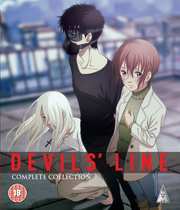 A tragic romance between a human girl and a vampire? This sounds like a typical anime show; they love their vampires in Japan, and given I’ve seen so many of the genre over the years, from Vampire Knight to Shiki, I ought to comfortable watching Devils’ Line. There’s just one problem. Over the last few months, I’ve been re-watching Buffy the Vampire Slayer, and when it comes to tragic romances between humans and demons, you have to go a long way to tell a better story than that of Buffy and Angel, or Buffy and Spike. I’m up to Season 7 of Buffy, and I could just be all vampired out. You have fair warning ahead of time, that I may not be giving Devils’ Line its due by the end of this review. I ask forgiveness in advance. 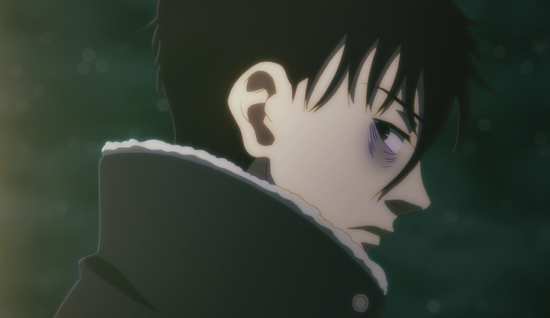 It’s a world where vampires live side by side with humans, albeit most humans are blissfully unaware. For vampires are human for the most part, they don’t have to worry about sunlight, or crosses, or garlic, and they hold down jobs, have families just like everyone else, and there’s nothing stopping them from making friendships and relationships work with humans. They could live their whole life without who they are becoming an issue. It’s only a problem if their craving for human blood is ever awakened. 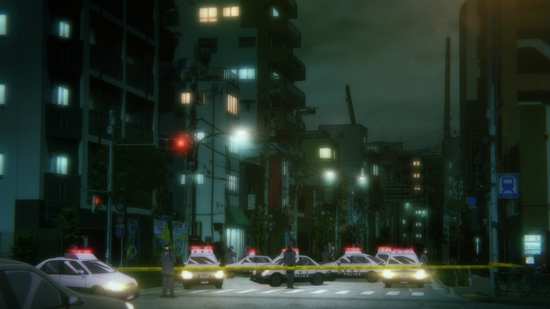 Tsukasa Taira becomes one of those rare humans to learn of this truth, when the boy that is sweet on her turns out to be a vampire. He’s been nursing this crush all through college, but things take a darker turn when his bloodlust is provoked, and he becomes a serial killer, preying on strange girls to avoid unleashing his dark nature on Tsukasa. That plan doesn’t work, but there’s a secret police force to protect humans from vampires turned into devils (what they are called when their bloodlust stirs), and a policeman saves Tsukasa from her erstwhile boyfriend, although Tsukasa wasn’t expecting a kiss from him. It was Tsukasa’s cut lip that provoked the kiss. Yuuki Taira is a half blood vampire himself, and the day he meets Tsukasa is the start of a dangerous relationship, as he has to battle his devil half to stay human. 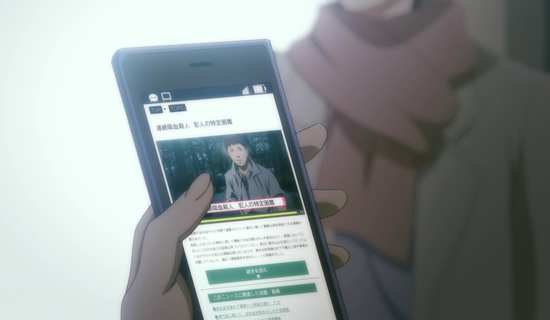 12 episodes of Devils’ Line plus the OVA are presented across 2 Blu-ray from MVM. 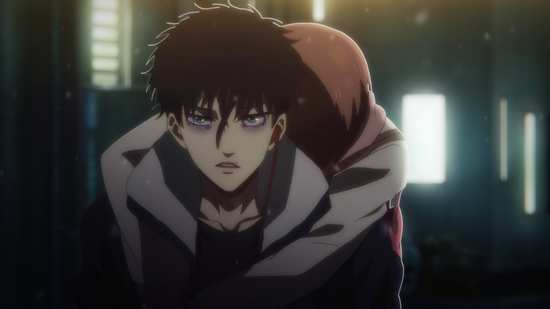 Devils’ Line gets a 1.78:1 widescreen 1080p transfer. The image is clear and sharp, although there is a smidge more digital banding than in the average anime release. It’s more to do with the settings and colour palette than the transfer though. This is quite a moody show, one which tends to the more muted, autumnal colours, and there are plenty of darker scenes. The animation is smooth, and the character and world designs tend to the more realistic. There are no signs of compression and aliasing to worry about, and over all, it’s a very watchable show. 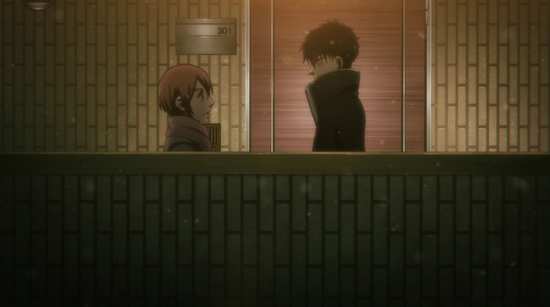 You have the choice between DTS-HD MA 2.0 Stereo English and Japanese with player locked subtitles and signs. I was happy enough with the Japanese audio, and the subtitles were accurately timed and free of typos. The dialogue was clear, and the action presented well through the stereo format. Devils’ Line gets a couple of really catchy theme songs which suit the mood of the show well, although the incidental music isn’t quite as noticeable. 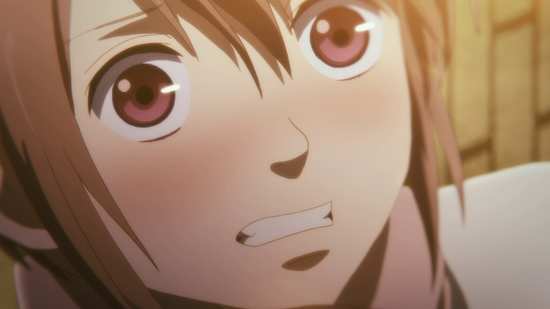 The discs present the episodes with static menus, and each episode is followed by a translated English menu scroll.

The extras on disc 2 include the textless credits, and trailers for Doreiku: The Animation, Kokkoku, Parasyte ~the maxim~, and Akame ga Kill! 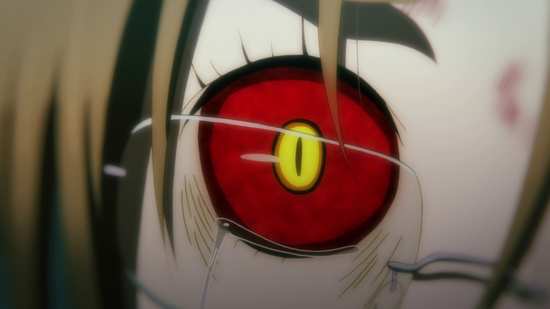 Devils’ Line has two things going against it that stop it from being a memorable show. It’s mediocre verging on good at best, and occasionally might send your eyes a’rolling, but it could have been so much better. The first issue is that it desperately wants to be Tokyo Ghoul. In effect, what the story does is lift the ghouls out of the narrative and replace them with vampires, gives the story a tweak or two to make it different, but generally has the same feel to its world, that of two races living side by side, trying to co-exist despite certain factions. 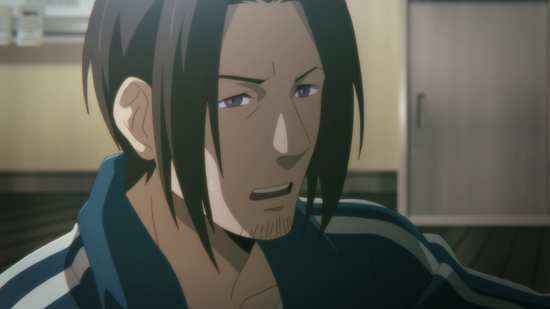 The second problem comes with one of those tweaks. The big difference here is that at the heart of Devils’ Line is a romantic plot between its main characters; a potentially tragic romance between a college student and a vampire/devil. This could have been good, the selling point that actually set this show apart from Tokyo Ghoul. It’s just that the relationship is written with the typical anime ineptitude that you see in the more common high school anime. It needs believability to go with the seriousness of its premise, but it doesn’t get close. 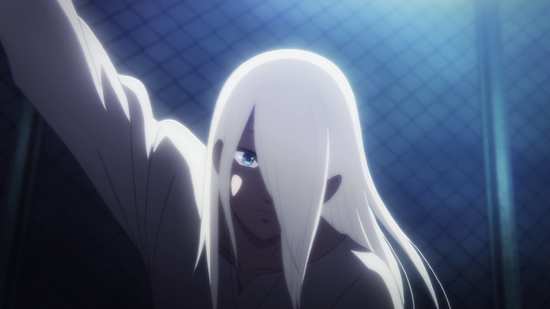 When we begin the series, we’re presented with a world where most people are unaware that they share the world with vampires. After all, vampires pass for human most times, can walk in the sun, and aren’t startled by crucifixes. They are to all intents and purposes normal, unless their bloodlust is triggered, by the sight of blood, or by extreme arousal. Some can live out their lives without ever being triggered. Tsukasa Taira’s classmate is revealed to be a vampire when he develops a crush on her, and has to channel his feelings by murdering innocent women so that he won’t attack her. That doesn’t work for long, and Tsukasa has to be rescued by Yuuki Anzai, a member of a secret police unit that deals with vampires discreetly so that the general public never knows. 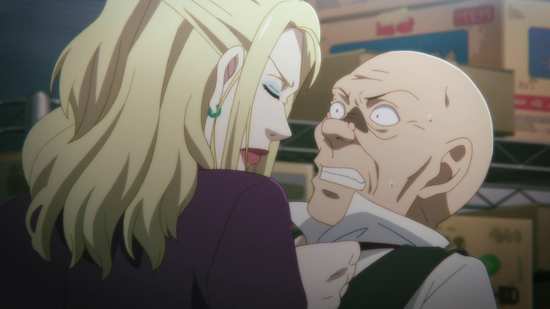 Tsukasa falls for her rescuer, and it doesn’t make a difference to her that Anzai is a vampire as well, one who is triggered for the first time when he falls for her in return. Fortunately he does slightly better in controlling his urges. This relationship should be the heart of the show, but the writers are rather juvenile and inconsistent about it. At times they can be candid and honest in a mature way, but then suddenly they’re blushing and awkward like teens in a harem rom-com. Given that she’s a college student, and he’s a policeman, you’d think they’d have outgrown it. It doesn’t serve the show well and makes it harder to invest in. 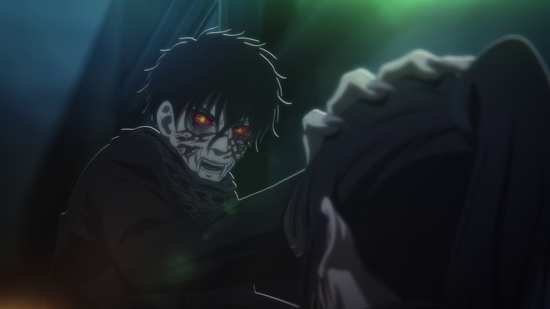 The story itself does get pretty interesting, with a terrorist faction trying to reveal the existence of vampires to the world at large, conspiracies within the police that pit the protagonists against each other as they struggle to understand just who to trust, and Anzai’s dark, hidden past that hints at a government plan for vampires. It’s all juicy and interesting stuff, and it all progresses with pace and energy until the final episode. The story looks to be heading in the kind of ambiguous and inconclusive direction that would demand a second season, but at the last minute, and despite the pessimistic direction the story takes, they find a way to wrap it all up at the end of the episode. It turns out that no one wins, least of all the viewer as it’s just not satisfying, while the OVA episode is a ‘cake and eat it’ epilogue that wraps it all up with an info-dump of exposition. 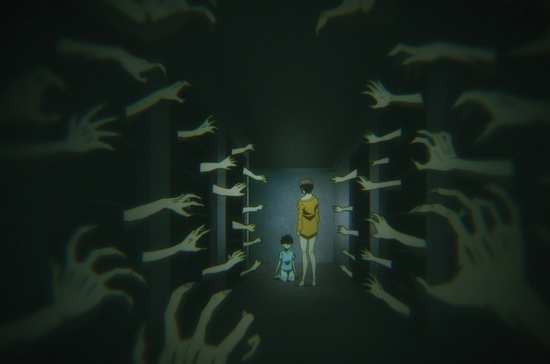 Devils’ Line works best while you watch it. The central relationship isn’t strong enough to carry the story, but the twists and turns do hold the interest. But Devils’ Line just doesn’t deliver the knockout punch the show needs to be memorable. Still, at no point was I compelled to switch off, and I enjoyed it while it lasted.