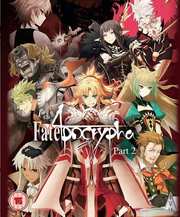 The thing about story franchises and narrative universes is that you expect them to conform to a consistent set of internal rules. When stories start to stray from those rules, there’s only so much leeway that you can give before your suspension of disbelief snaps and you’re thrown out of the experience. That happened to me with the first part of Fate/Apocrypha. The Fate universe that I have experienced thus far in three TV series and a movie has led me to expect that its world works in a certain way, its tale of Grail wars fought between mages and the historical spirits they summon conforms to a set of rules. Fate/Apocrypha completely tore up that rulebook and defiantly did its own thing, and by the end of that first collection I was out of sorts with the show. At least now that Part 2 is here, I am familiar with the show’s approach to storytelling. I won’t be offended by its breaks from its internal reality. Hopefully I can give it a fairer shake now. 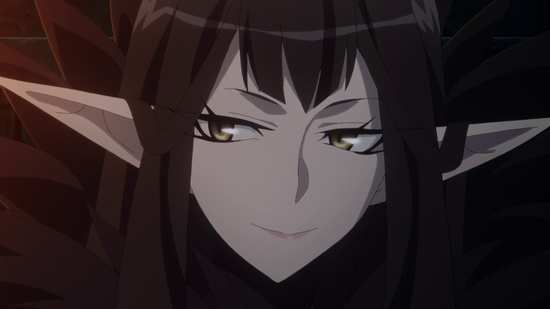 In this world, history played out differently. The Grail Wars in Fuyuki City ended 60 years ago when the Grail was taken. But now the Greater Grail has been found by the Yggdmillennia family, and they are rivals to the Mage Association. Their leader, Darnic has essentially declared war, a Greater Holy Grail war. His family have summoned 7 Servants for 7 Masters, black pieces in a magical chess game. It’s incumbent on the Mage Association to counter the Yggdmillennia family, and form a red team of Servants to recover the Grail. They recruit a necromancer named Shishigou, and he summons Mordred, son of Arthur as his Servant Saber. But Shishigou isn’t exactly a team player. The Yggdmillennias have other advantages too, an army of golems, and a production line of homunculi to act as cannon fodder. But nothing about this war is conventional, including the arrival of a Ruler class Servant, a mythical hero to adjudicate the war. 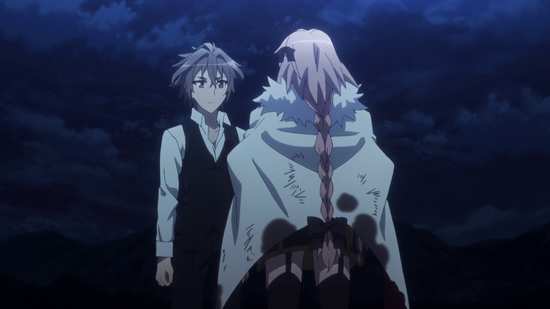 The concluding thirteen episodes of Fate/Apocrypha are presented across two Blu-rays from MVM. 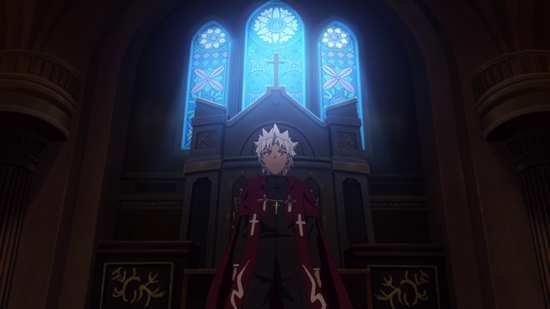 This should be good, an Aniplex show, with a 6-6 distribution across 2 dual layer BDs, and of course we’re back in the Fate universe, which since Fate/Zero has been hitting it out of the ballpark when it comes to animation quality and visual impact. Sure enough, the 1.78:1 widescreen 1080p transfer looks fantastic at first glance. The image is clear and sharp, the world design is fantastic, the characters are striking and effective, and the production value is visible in each frame. There are some serious effects in the battle and magic sequences, and the whole thing buzzes with quality. But there are plenty of darker scenes, and banding is a noticeable issue, although it could have been worse. 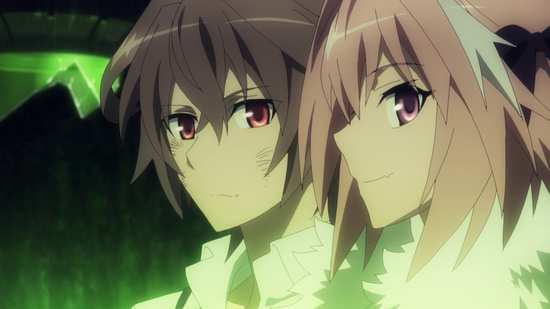 You have the choice of PCM 2.0 Stereo English and Japanese with translated subtitles and signs. I stuck with the Japanese audio throughout, and was somewhat disconcerted with the experience for a change. The dialogue is clear, the subtitles are timed accurately and are free of typos and the music and action comes across well for the most part. But there is a lot of action, and this is a show which emphasises the action with some serious LFE. This is a show that resonates the explosions of magic with bass to the level of distortion. I don’t think it’s an issue with the transfer, it’s consistent enough to be a creative choice, and I found it to be really quite distracting. 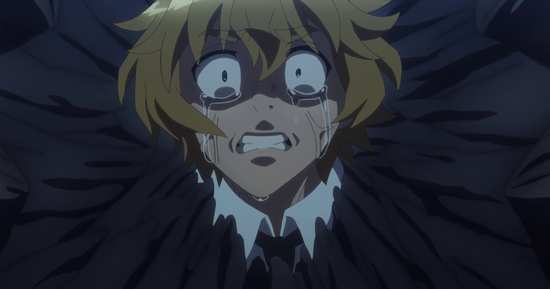 The discs present the show with animated menus.

On disc 2, you get the textless credits. 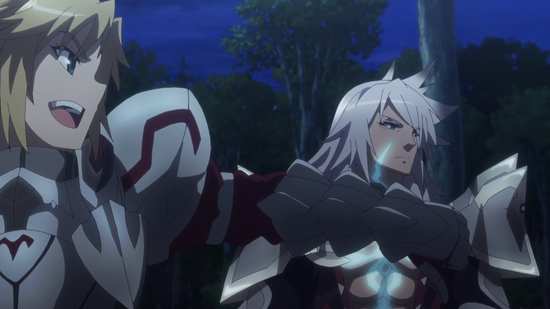 I didn’t get on with part 1 of Fate/Apocrypha. In my view the show suffered from two problems, the indeterminate haphazard plot that comes from sheer character overload, and the apparent insistence that this show tears up all the rules of the Fate universe, established in several series and films to this point, and throwing in one ridiculous character or plot development after another. I likened it to a Michael Bay movie; all spectacle and noise, and with no character or emotion to invest in. That’s the kind of first half to a show that you’d expect would take a miracle to redeem. 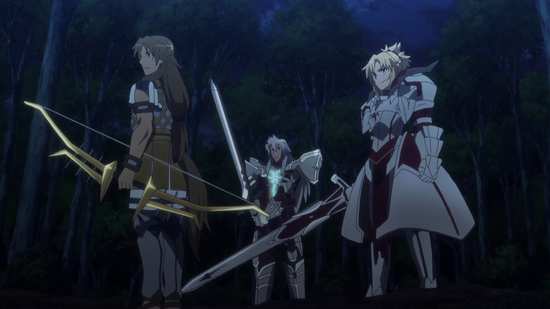 Well here’s a shock. The miracle happens. Fate/Apocrypha Part 2 takes the mess of those first twelve episodes and pulls a story together, finds the character beats, and forges an emotional connection between the story and the viewer. Not too long ago, I was looking forward to never having to watch Fate/Apocrypha again, and now, I am looking forward to the next time I watch this, to see those first twelve episodes again in light of the show’s conclusion. 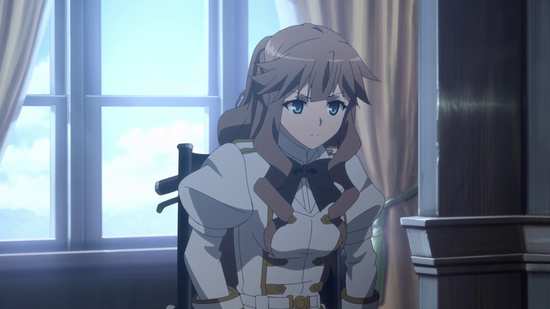 Actually it’s the first fifteen, as the initial three episodes in this second half, continue in the same vein as the start of the show. There’s a whole lot of character overload, plenty of things happening in several different places, and it’s hard to keep track of it all. But the thing about a Greater Holy Grail War is that that it is a war. There is attrition, and there is loss. The characters are pretty quickly whittled down to the essential few that will stand at the conclusion of the story, and it’s at this point I found myself engaging with who they are, what their backgrounds were, and what motivated them. The show should have been doing this from the get go, but there were just too many to keep track of. 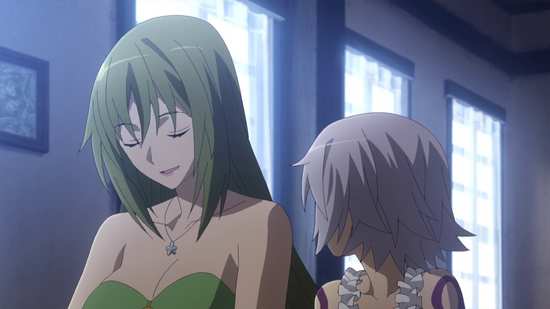 There then follow three episodes which at first looked like filler, a diversion away from the main storyline. The Black side had a mess to deal with, that of Jack the Ripper, ostensibly the Black Assassin, but actually a hero/mage partnership that was doing its own, horrific thing, leaving the carnage of a serial killing spree behind them. It falls to the Yggdmillennia family to deal with this, and given that Ruler, Jeanne D’Arc is supposed to keep the Grail War from affecting normal people, she and the homunculus Sieg also help. The Jack the Ripper tale in this show is a tragic and polarising one, the legacy of child murders brought to the modern day, and how the Jack heroic spirit is dealt with divides the heroes of Yggdmillennia and the Red heroes led by Shirou, down emotional lines. This arc sows the seeds that will let you invest in the epic battles yet to come in the show. 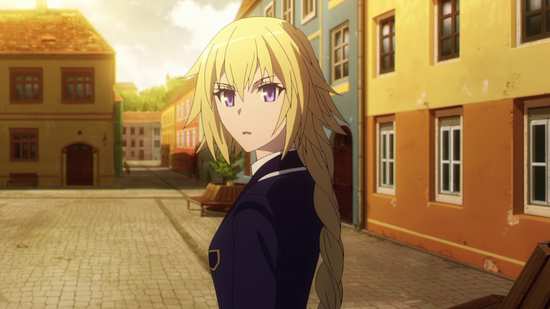 There are some serious, nuclear level fights in the climax to the story, which comprise the final seven episodes, but by this point the characters are so well established, and the goals they are trying to achieve so clearly defined that I was hooked on every word, glued to every scene. The show still plays loosely with what you might have come to know and expect about the Fate universe, but by the time Sieg goes through his final character developments and revelations, it no longer seems like such a stretch. I was into the story completely at this point, invested in the characters, and that made even the final plot twist easy to accept. 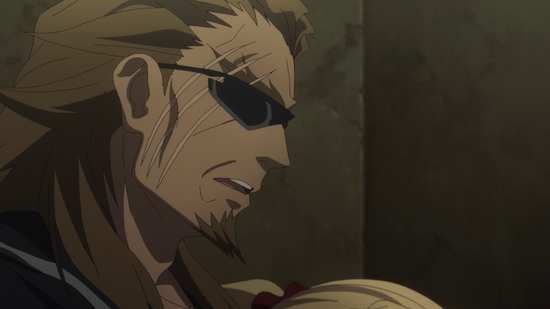 Fate/Apocrypha pulls it out of the bag with its second half. It’s still the noisy, flashy, adrenaline fuelled spectacle that you’d expect from a summer blockbuster, but it now has the heart, the soul of a good story to make you watch despite all that.