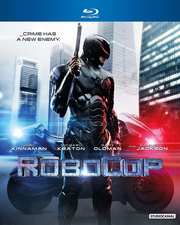 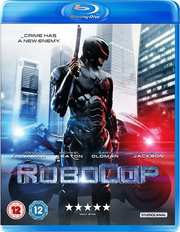 I couldn’t review the original Robocop without badmouthing the remake a little while ago, and then I realised that I hadn’t actually watched the 2014 re-imagining, not properly at any rate. I have on occasion caught a bit here and there when it’s been shown on television and scoffed before changing the channel, but I’ve never actually sat down to watch it from beginning to end. As I mentioned in that review, the Blu-ray for the 2014 Robocop is cheap, ridiculously so, and I had no excuse not to finally give the film my whole attention. Maybe it isn’t actually as bad as I think.

Omnicorp are raking it in when it comes to automated warfare and urban pacification, with their military robots. That’s everywhere except the US, where it is against the law to use robots in any enforcement capacity against humans. CEO Raymond Sellars needs a solution for that lucrative market, and that solution arises when police officer Alex Murphy is critically injured in a bombing. Using what’s left of his body and mind to create a cyborg police officer seems to tick all of the boxes, but the trouble is that the man seems to keep getting in the way of the machine.

The film gets a 2.40:1 widescreen 1080p transfer, with the choice between DTS-HD MA 5.1 Surround English, PCM 2.0 Stereo English, and DTS 2.0 Stereo English audio descriptive with optional English subtitles. The sound is fine, the dialogue is clear, the action comes across well making use of the soundstage, and the music drives the plot and emotion without really registering. The image is clear, the detail levels are good, and the colours are consistent. The problem lies in that this is a digitally shot film, and consequently shadow and dark detail is lacking, while there are the odd juddery pans, and this being a modern film, there will be CGI to throw you out of the experience.

You get one disc in a BD Amaray case. The disc autoplays trailers for Non-Stop, Alan Partridge: Alpha Papa, Rush, and a chocolate ad before booting to an animated menu.

Finally there is the theatrical trailer.

Here’s a turn up; Robocop 2014 isn’t bad. It actually doesn’t suck. I’ll never watch Robocop 3 again, but I won’t mind re-watching this one. It’s also a more coherent narrative than Robocop 2. Of course it’s not a patch on the original Paul Verhoeven classic, but this re-imagining of Robocop actually tells a halfway decent story, and has its talking points that set it apart from the original. I’d have even rated it a little more if it had been a generic ‘cop turned into a cyborg’ movie rather than one trading on the Robocop name, as one of the reasons it deserves to be damned is that it tries to ride the coattails of the original.

What really killed Robocop 2014 was the studio of course. They had put in their money, and they demanded a return, and mandated that the film be rated PG-13. Gone is the gory violence of the original, gone is the sex, and gone are the swears, and actually it also neuters what little dark humour remained as well. This is a family-friendly Robocop, and it rips the soul out of what might have been a decent movie and in the most basic, fundamental way possible. In the original movie, Alex Murphy was a battered wreck of a man turned cyborg. In this movie, it’s an actor in a rubber suit, and no amount of CGI trickery will fix that.

It could have been better; after all the script is actually one adapted from Ed Neumeier and Michael Miner’s unused script for the original film, discarded when Verhoeven realised that the film needed the satire and dark humour. To begin with the film looks as if it’s flipping the whole Robocop concept on its head. In the original, Alex Murphy was killed in the line of duty, and turned into a machine, and then spent the course of the film rediscovering his humanity. In this film, Alex Murphy is critically injured, and given a second chance at life as a cyborg, and in a country where machines aren’t allowed to police humans, it’s his humanity that is most precious to his creators. You might have hoped that this would be a film more focused on the man as machine losing his humanity, contrasting the machine discovering it in the original, but the story pretty quickly flips back to the original concept.

There are elements of the film that ground it as contemporary and relevant. Certainly the opening sequence of Omnicorp robots patrolling the streets of Teheran put you in mind of US drones bombing wedding parties in Afghanistan, while the sole satirical element remaining in the film, the framing device of Samuel L. Jackson’s Novak Report is actually a little prescient, giving the film a touch of Trump’s America a couple of years before it came to pass. It’s a sign of the times perhaps that the eighties’ ‘greed is good’ message that was lampooned in the original, has to be played straight in the remake, as quite frankly, the corporations won.

There’s the germ of a good story there, the characters work, but that PG-13 rating gutted the film. As soon as I see PG-13 or a 12 rating on a film, I get distracted waiting for the single solitary BBFC mandated F-bomb that is allowed. The story misses chances to do something special with the concept, but instead goes from beginning to end as safely as possible. A couple of points in the film will be extra disappointing when you hear snatches of Basil Poledouris’ score from the original, and you might expect something special to happen, and it doesn’t. And worst of all, it telegraphs the villains well in advance. The original did that as well, but it had enough in the arsenal in the way of character, style, and black comedy to back it up. Clarence Boddicker’s little finger had more charisma than any of these villains. And naturally there are a couple of dumb looking CGI action sequences that threw me out of the film, leaving me swearing at the screen.