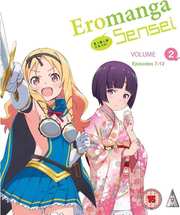 You can’t get away from the elephant in the room which is the incest thing. That means I’m starting my review for Eromanga Sensei Part 2 in pretty much the same way as I did with Part 1. I’m not a fan of this particular trope, but this is what Eromanga Sensei is about, albeit with a whole lot of mitigation and caveats. It’s from the creator of the similarly themed Oreimo, which had a brilliant first season as it turned out to actually not be about that, and then an absolutely dire second season when it did go there and cross the line. Eromanga Sensei front loads its story by establishing that the protagonists aren’t blood related, are step-siblings who haven’t really communicated in the year they’ve been in the same family, and whose parents have been absent for that time due to some unspecified tragedy. Please Twins had a more risqué set-up than that! In the end, the first half of Eromanga Sensei turned out to be quite an enjoyable harem comedy. I certainly have been looking forward to this concluding half of the series, albeit with some trepidation. 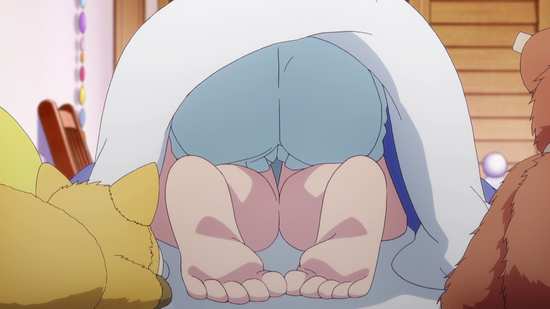 The memories of meeting his step-sister Sagiri are all that Masamune Izumi has to cherish. Since then, and following a tragic incident, she’s been a shut-in, living her life from her bedroom. To make enough money for them to live on, he’s got a career writing light novels, which he balances with going to school. And he lives in the eternal hope that one day, Sagiri will overcome her socially reclusive propensity and come out of her room. Almost as reticent is his partner when it comes to the light novels. He writes the words, but the pictures are drawn by an artist with the pen-name of Eromanga Sensei, an artist that not even his editor has met. Then one day, Eromanga Sensei has a live-streaming event online, where they will interact with their fans, and draw some requested art, all from behind a disguise. Only Masamune recognises his sister’s room and a mistake with the webcam following the live-stream means that he has to force the issue to save his sister’s dignity. 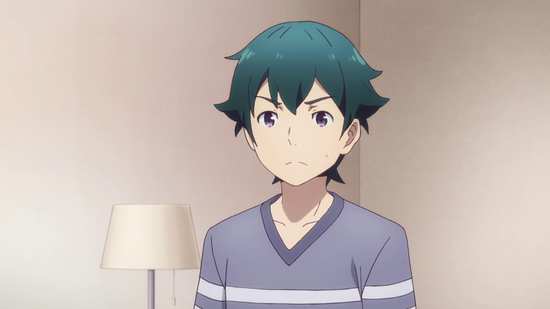 The concluding six episodes of Eromanga Sensei are presented on this Blu-ray disc from MVM. 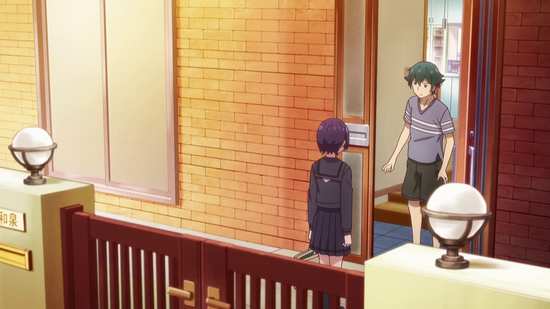 The show gets a 1.78:1 widescreen 1080p transfer on the disc. The image is clear and sharp, colours are rich and consistent, and detail levels are excellent, the animation smooth and fluid. There are no visible signs of compression, aliasing or banding, to be expected given the disc’s Aniplex origin, and the whole thing looks fantastic. The world design is detailed and vivid, with an eye to realism, while the character designs tend to the cutesy, the lingering camera and direction always keeping fan service in mind, but never being too blatant about it. 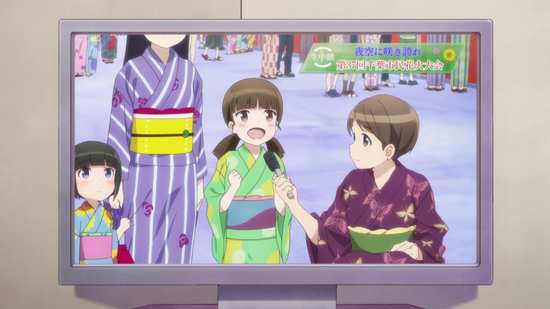 You get PCM 2.0 Stereo Japanese with optional English subtitles. The audio is fine, the characters suitably cast with likeable voices. It’s a dialogue heavy piece set in the ‘real’ world, so stereo testing action isn’t all too common. The music is suited to the comedy, while the theme tunes are catchy and induce toe-tapping, getting suitably agreeable animations as well. The subtitles are timed accurately and are free of typos, but being an Aniplex disc, tend to alternate top and bottom of the screen, depending on where the action in a specific frame is. 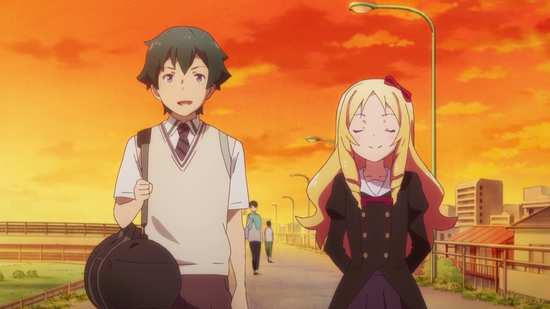 You get 3:31 of Web Previews, one Textless Opening, three Textless Closings, and trailers for Attack on Titan S1, Occultic;Nine V1, Overlord, School-Live!, and the Madman Anime Fest. 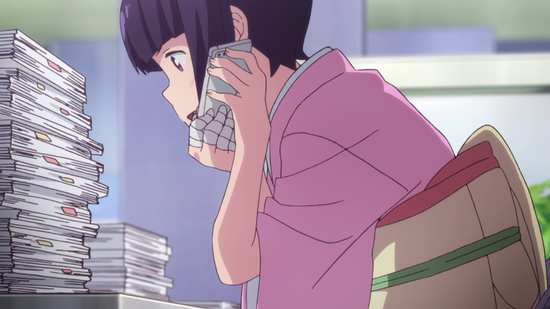 Oreimo’s first season was surprisingly brilliant, but the second season was everything I expected from this genre and worse. Eromanga Sensei at its best doesn’t approach Oreimo S1, but it is still a very good, entertaining show, and once again because it patently doesn’t go there. Even though its setup is such that any potential relationship between Masamune and Sagiri wouldn’t register on the ick-ometer, it instead tells a rather different tale, taking us into the world of light novels and their authors, developing Sagiri and Masamune’s relationship in such a way that they bridge the rift between them formed by their parents’ off-screen deaths (we assume), and Sagiri’s self-imposed isolation. In much the same way, Oreimo’s first season was more about healing a rift between siblings, and exploring the darker, and more obsessive sides of fandom. Just like Oreimo Season1, Eromanga also has enough in the way of other female characters for it to serve as a quite delightful harem comedy as well. 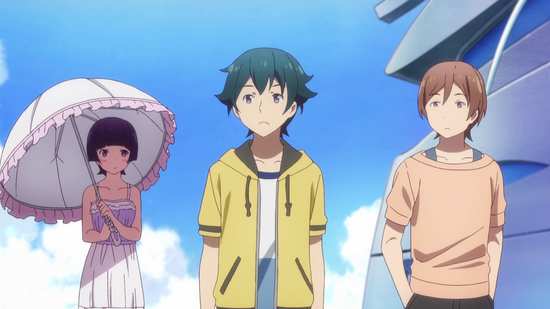 It lacks the satirical edge of Oreimo Season 1, so it doesn’t quite stack up as well, but I have to say that Eromanga Sensei is a whole lot of fun to watch in its own right. The first half of the series set up the premise, and introduced the characters. Masamune Izumi is a young boy who has become a light novel author to earn enough money to support his prematurely truncated family. All he has left is his step-sister Sagiri, who has been locked away in her room since tragedy took their parents away. Their lives begin to change when he learns that Sagiri is secretly the artist known as Eromanga-sensei, the silent partner who has been supplying all the illustrations for his books. Now that the secret is revealed, it becomes possible for the two of them to work together, and for her to start to overcome her insular shyness. Things get complicated when a rival author appears, Elf Yamada, who also wants Eromanga-sensei to illustrate her books, and she winds up falling for Masamune as well. 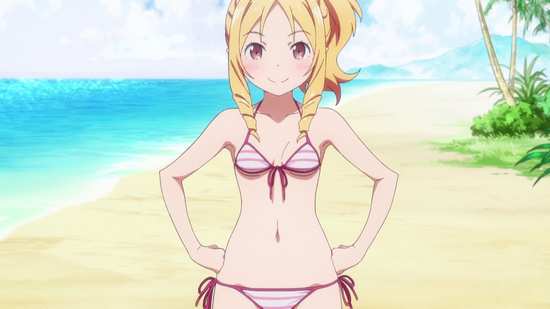 His career having hit a dry spot, Masamune urgently needs another hit, and he sees the chance of doing just that by winning a writing competition and getting a quick publishing spot in the schedule. But the arrival of another, more popular light novel author named Muramasa, a demure girl in a kimono threatens all that, when she declares that she will enter the competition to win, and that’s where we start this collection of episodes. In reality, another girl in the mix means another string to the harem comedy bow, and the real motives behind Muramasa’s actions become clear. The competition also introduces another character, an author named Kunimitsu Shidou, and for the middle two episodes of this collection, all the authors go on a writing retreat to an island resort, allowing for this series quota of girls in swimsuits. Sagiri stays home of course, giving permission for her brother to attend as long as she gets lots of reference material for her artwork. There are plenty of rom-com indulgences to be had on the island, but things get dialled back a bit in the penultimate episode when they return. 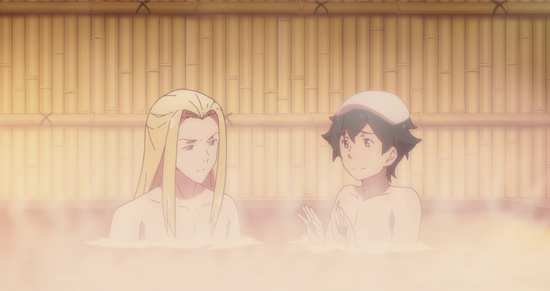 It’s time to reap the rewards of publishing their latest novel, and Masamune takes Sagiri on a virtual date to a launch event at a bookshop. A webcam in a tablet computer lets Sagiri ‘walk’ with Masamune, and as they talk, we learn of their shared past, which it turns out began before their parents married each other. It’s a sweet, melancholy tale which serves as a nice background to the story. The final episode is a piece of pure fun, as funny as this series gets, and one of the few episodes where I was laughing out loud for the duration. Until that point it had all been smiles and the occasional chuckle, but Eromanga-sensei saves the best for last, even if it is inconsequential in terms of the narrative. 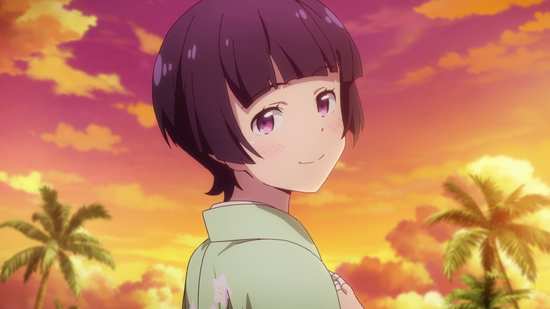 Eromanga-sensei is a fun little series which while it worried me with its premise, doesn’t go there in the end. It’s an enjoyable harem comedy with plenty of heart, and likeable characters. But given the creator’s track record, I suspect I won’t be alone in hoping that this show never gets a second season.