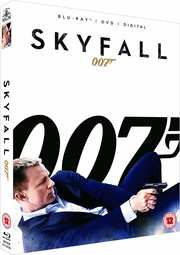 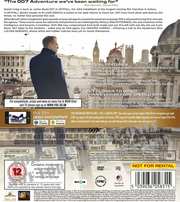 I adored the James Bond movies when I was younger. The Connery and Moore movies were mainstays of holiday programming, and I couldn’t get enough of the action, the campness, the irony and the sense of fun. And when the Dalton movies came, and took the character in a grittier direction, coupled with the late eighties action movie sensibility that was exemplified by films like Die Hard and Lethal Weapon, suddenly Bond was playing to my demographic. Alas, that didn’t last, and after just two movies, Bond was recast with Pierce Brosnan, and his tenure signalled a step back to the days of Roger Moore, albeit with modern effects technology. I felt like the odd one out for not liking Goldeneye, but I surely wasn’t alone in suffering terminal rolleyes when Die Another Day came out. The fortieth anniversary Bond movie was anything but an ode to the franchise. Thereafter Bond took another pause, although not as long as the gap between Dalton and Brosnan.

When Bond did come back, the landscape for action movies, and more importantly spy movies had changed once more, thanks to the Bourne franchise. When Daniel Craig was cast in the role, I certainly didn’t have an issue with the whole ‘Blond Bond’ whinging that was going around at the time, although the pout did give me pause. Stripping Bond back to basics seemed a good idea, a partial reboot, making the character gritty and human (although they could have just stuck with Dalton!), but when it became apparent that the trademark humour and irony would be dialled down, and a Bourne immediacy to the action introduced; that’s when I tuned out. If I wanted to watch Bourne, I’d watch Bourne. Bond should be defining the genre, not aping another franchise altogether. Over the years, I have caught the Daniel Craig Bond movies on TV, usually piecemeal, and I have never felt the urge to re-watch them. That’s except for Skyfall, which for some reason I always gravitate to when it’s broadcast. This was the 50th Anniversary James Bond movie, and while Die Another Day was all wrong, Skyfall was all right, better than all right. Let’s take a look at the Blu-ray.

When a mission to retrieve a sensitive hard drive goes wrong, Bond is listed as missing, presumed dead. In actuality, he’s retired, nursing his wounds and his drinking habit on a beach somewhere. He’s called back to duty three months later when someone tries to decrypt the hard drive, from within the MI6 building, blowing it up in the process. Whoever is behind this is deliberately targeting M, and for James Bond to deal with this threat, it will mean going into M’s past, and his own.

Skyfall gets a 2.35:1 widescreen 1080p transfer with DTS-HD MA 5.1 Surround English, and DD 5.1 Audio Descriptive English, Spanish and French, Ukrainian and DTS 5.1 Italian, Russian and plenty of subtitles to choose from. (English SDH, French, Italian, Spanish, Danish, Estonian, Finnish, Icelandic, Latvian, Lithuanian, Mandarin (Simplified), Norwegian, Russian, Swedish, Ukrainian). There are no nits that I can pick with the transfer. The image is clear, wonderfully detailed, and making the most of the traditional Bond triumvirate of sets, locations and costumes. It looks fantastic, although like most modern films, it’s colour graded to within an inch of its life. Thankfully it doesn’t solely exist in orange and teal-verse. The audio is fine, immersive and impactful when it needs to be, while keeping the dialogue clear. The only think I can complain about is the caterwauling that passes for a theme song these days.

The release I got was the two-disc edition, which also has the film on DVD. You get two discs in a BD Amaray case, one on each inner face. The DVD also has a digital copy of the film, so you can imagine that with 2 GB given over to that, the AV quality of the DVD isn’t spectacular.

The extras are on the Blu-ray beginning with the Shooting Bond making of documentary, split into 14 parts and with a total runtime of 59:24.

There is a small featurette on the Skyfall Premiere which last 4:28.

There is a commentary on the film by director Sam Mendes.

There is also a commentary from producers Barbara Broccoli and Michael G. Wilson, and production designer Dennis Grassner.

Finally there is the Theatrical Trailer and the Soundtrack Promotional Spot.

Skyfall isn’t my favourite James Bond movie. I can’t shift Timothy Dalton as my favourite Bond, and for sheer entertainment value, I’ll turn to Licence to Kill and The Living Daylights every time. But more objectively, I have to say that Skyfall is the best James Bond movie to date. That’s because it is about so much more than good guys and bad guys, plots for world domination, secret lairs and doomsday weapons. Skyfall is about character, and it’s all the better for it.

I can take or leave the Bourne make-over to the action. Most of the action sequences are thrilling and exciting as you would expect, but on occasion, like the fight sequence with the sniper in Shanghai, it can be a bit of an obscure mess. But generally the action really does suit the modern cinematic vernacular. The campness to the Bond sense of humour has gone, although the villain Silva has his own dark camp sensibility that is more terrifying than it is funny. This Bond movie’s humour is drier than the cocktails Bond favours.

The 50th Anniversary is marked by this film in a much more appropriate way than Die Another Day did with the 40th. Any references in much of the film are subtle and oblique. If you pick them up, they can bring a smile to your face, and you lose nothing by missing out on them. The film saves its big love affair with the history of Bond for the final act, and then it is distilled down to the magnificent presence of the Aston Martin DB5. Quite frankly, if you try to encapsulate the whole of the Bond franchise in one image, one object, you can’t do much better than that iconic car.

But where Skyfall really hits the target is with its story. Sure it has the villain, the evil scheme and the grand secret lair; all the usual elements in a Bond movie, but this time around they are not the point. This time it’s the relationships between the characters, between Bond and M, and between them and the film’s villain Silva. It’s about sacrifice and about loyalty. The spy business as portrayed in Skyfall is a pretty nasty affair. Completely loyalty to Queen and country is demanded, yet it is a one-way street. If something goes wrong, spies are disavowed without a moment’s hesitation and apparently without remorse. Yet you can’t take the personalities out of this cold equation. Personal connections are formed, personal loyalties are formed, and the film plays with the conceit that Bond’s relationship with M is that akin to son and mother, reinforced by the idea that the best recruits for MI6 are those without familial connections.

When the film starts, it seems as if Bond has been disavowed himself, when the mission to retrieve the hard drive goes wrong. So while Bond accepts the state of affairs, there is that sense of betrayal and recrimination that lingers. Yet when MI6 is attacked, and it seems M is targeted personally, Bond comes out of retirement to do his duty once more, and to protect M. The villain of the piece is created almost as a mirror image to Bond, minus his more obvious flaws. Silva likens himself to a brother to Bond, one who has suffered much the same in his past life, but who doesn’t accept the disavowal, the betrayal in the same way. His loyalty may have been to the state, but he expected some loyalty in return, and when that wasn’t forthcoming, that elevated his need for retribution. Silva is a wonderfully complex character that makes the film work on more than one level.

A character driven narrative is a rarity in a James Bond movie, but in Skyfall it elevates the film beyond its genre constraints and franchise clichés to deliver an exemplary experience. The Blu-ray presentation is solid, although the extra features are rather standard, and lack the commemorative tone that the 50th Anniversary demanded. Skyfall is the best Bond movie and is worthy of a place in any collection.