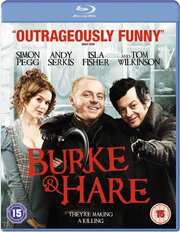 Review for Burke and Hare

The Blu-ray shelf in Poundland is my new rental space. When you pay just £2 for a movie, it’s a lot easier to take a shot on an obscure, or half-remembered film, or a completely schlocky blockbuster title, and better than renting, you don’t have to take them back after you watch them. I used to pay more to borrow videotapes back in the day. When my eyes lit upon Burke & Hare on one such shelf, it triggered a vague, moth-eaten memory of a review I once saw, which suggested that it might be the kind of dark comedy that would appeal to me. That’s enough to get me to rifle through my change looking for pound coins. When I got home and took a closer look, I saw it was directed by John Landis of Blues Brothers and Trading Places fame. That gave me reason to move it to the top of my Poundland acquisition pile, above the Teenage Mutant Ninja Turtles sequel. If it’s just 2 quid, I will pick up some weird s***!

Burke & Hare is loosely based on an infamous true story, although dramatic license has been liberally applied to this black comedy. 1828, and Edinburgh is the medical capital of the world, at the cutting edge of research. Two doctors, Dr. Monro and Dr. Knox are in competition for royal recognition, and they both need cadavers for anatomical research. Monro uses his connections to get a law passed which has all the corpses of executed prisoners sent to the Royal College of Surgeons, leaving Knox lacking for experimental subjects.

William Burke and William Hare are Irish chancers who are trying to make some easy money in Scotland, although their latest scheme fails miserably. Returning home, Hare’s wife Lucky tells him that their financial straits are even worse, as their lodger has just expired, without paying rent. They think getting rid of the body would just be a pain, but then they learn that Knox is willing to pay through the nose for the recently deceased (grave robbing isn’t easy with the militia patrolling cemeteries, and the maggots make for putrescent dissections). Burke and Hare realise they have a lucrative business opportunity. The only problem is ensuring supply.

Burke & Hare gets a 2.35:1 widescreen transfer at 1080p resolution, with DTS-HD MA 5.1 Surround English audio and with optional English subtitles. The audio is fine, the dialogue is clear, and the surround is effective, even for a film set at the start of the 19th Century, where ambience is a lot more prevalent than effects. I do think that the choice of the Proclaimers for the end credits is a weird one though. The image quality isn’t the strongest. In the end credits, reference is made to Kodak, the inference being that this was shot on film. Yet the poor dark detail, the lack of grain, and the smoothness of skin tones suggests that this was digitally shot. It’s a really odd one. The colours of the film tend to the autumnal, blues and browns, but there is problem with shadow detail, especially given how much of the film is set at night. It’s as if the film is suffering from black crush, with shadows so uniform at times that there is a blue tint to the blacks, but it’s subsequently dialled back to grey, so you get this weird grey/blue effect in night time scenes which looks totally unreal.

You get one disc in a BD Amaray case and the disc autoplays with trailers for London Boulevard, The Tournament, and Wild Target before booting to an animated menu.

For once, I’m at a loss to explain why I feel a certain way about a movie. The parts are all there; I should have liked Burke & Hare, but this time the sum of the parts is less than the parts. I just didn’t enjoy this film. It’s a black comedy, and I did laugh, occasionally. You can’t get much darker than the Burke and Hare murders, when a couple of grisly entrepreneurs decided to fill a need for cadavers by making their own, and by the time they had been caught, 16 people had died for ‘science’. That should result in this film being a comic journey into the macabre that leaves you as uncomfortable and off balance as much as it makes you laugh. But Burke & Hare was tepid in this regard; Carry on Screaming did it better!

You have this great story upon which the film is based. You have a great cast, with strong performances. When it comes to cameos and small roles, this is a who’s who of British talent, and coming to the screen bearing the hallowed Ealing Studios name, it makes every effort to live up to that legacy. You can’t fault John Landis’ direction, the production values are rich and vivid, and the film’s pace is energetic and lively.

It still doesn’t work. Maybe it’s the fact that the traditional antagonists are the protagonists in the film. This is the story of the murderers after all. Other films have managed this transition with ease, but maybe it’s that Burke & Hare tries to make the main characters sympathetic and likeable. As a result, it dwells on the murders a lot less than it does on the comic predicaments the killers get in. It underplays the ghoulish nature of the story. At the same time, while William Hare’s part in this is motivated by greed, and a sparky relationship with his wife Lucky, William Burke’s need for money is driven by a burgeoning romance with actress Ginny, yet once again, I feel that the film underplays this. It never really gets the focus it deserves.

It could also be that the film tries to do too much, with Burke & Hare’s exploits on the one hand, the rivalry of Knox and Monro on the other, a third hand required for the militia’s investigation, as well as a subplot about the criminal underworld and their protection racket (there are aspects of the story that are given an anachronistic, more modern twist). It’s a lot to get into just 90 minutes. Then again it could be that one moment where Paul Whitehouse showed up as a drunk, and resurrected his Rowley Birkin QC character for a minute that threw me out of the film. These are all reasons that might explain why Burke & Hare doesn’t work, although I couldn’t pin down which it is. All I can say is that the film works after a fashion, but with a weird tone that I can’t quite appreciate.

Entertainment in Video’s presentation is passable at best, but a film that is set mostly at night, with a whole lot of shadowy scenes, should have got a transfer that addressed those issues, instead of the hasty and perfunctory transfer it gets here.