The Royle Family return in Joe's Crackers this January 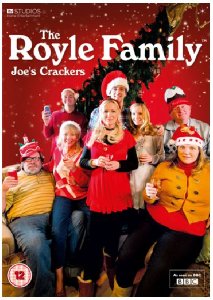 The Royle Family are back to their hilarious best in this one off special, Joe's Cracker's available on DVD from ITV Studios Home Entertainment. The modern day British comedy set in Greater Manchester sees the family deal with another turbulent Christmas full of laughs and mishaps.

It's Christmas Day in the Royle household and Barbara played by Sue Johnston is up to her eyes in it, as Jim (Ricky Tomlinson) is more out of action than usual following an unfortunate incident in the precinct.

Meanwhile Dave (Craig Cash) and Denise (Caroline Aherne) are feeling the effects of the recession the most, and worry that Anthony's (Ralf Little) lavish gifts will eclipse their gift of a fridge magnet.

This year's Christmas special also see's the return of Joe, played by Peter Martin who spends the day reminiscing about a drunken evening of naked wrestling in front of the fire with Bobby Carter, while Cheryl (Jessica Hynes) recounts her romantic encounter in the local supermarket car park.

Written by Caroline Ahern and Craig Cash, the BAFTA award winning series has all the original cast members returning for the special, and the entire episode going back to its original format, taking place in the Royle family household.
ENDS