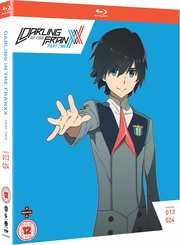 Review for DARLING in the FRANXX - Part Two

When it comes to the post-modern giant robot anime show, fandom has become an exercise in trying different iterations and approaches, looking for something to enjoy, while all the time waiting for someone to release Neon Genesis Evangelion on Blu-ray. All that we do with these new shows like Darling in the Franxx and Nobunaga the Fool, Knights of Sidonia, Adnoah Zero and so on, is compare them to Neon Genesis Evangelion. It’s kind of disappointing really that nothing much has seriously broken new ground in the genre in over 20 years, save the odd Gurren Lagann or Code Geass. While Darling in the Franxx didn’t do too much revolutionary in its first half, it did manage to entertain and enthral. Hopefully Part 2 will live up to the first, and make this show a keeper at least. 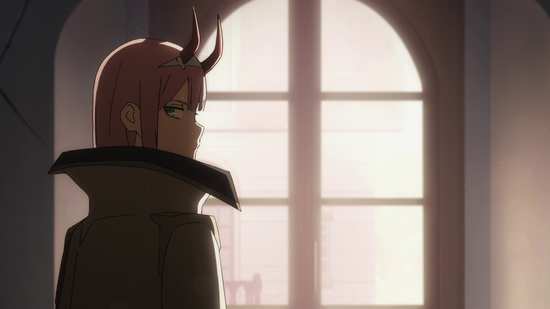 It’s the future, the world is a desolate wasteland, and the survivors of humanity live in mobile sealed cities called Plantations. The causes of this devastation are the Klaxosaurs, vast and varied creatures that attack the cities in order to feed off the magma energy that is humanity’s primary power source. To fight the Klaxosaurs, mankind has the Franxx robots, machines that are piloted by children, girls and boys in tandem, selected and trained for their psychological compatibility. 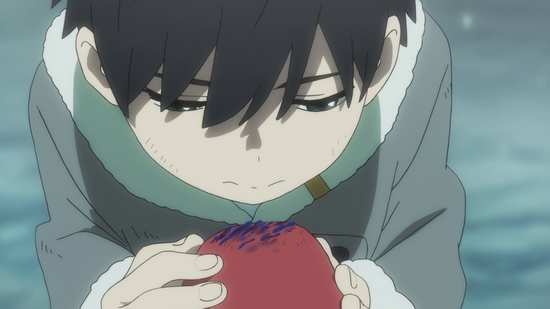 As this story commences, one prospective pilot, Hiro is due to be washed out of his team after failing to connect with his co-pilot. But then a special Franxx and its pilots arrive in Plantation 13. The Strelitizia girl pilot is Zero Two, and she has a reputation of rampaging on the battlefield, and sucking her male co-pilots dry after just a handful of missions. A Klaxosaur attack leads to Hiro serving as co-pilot on an emergency mission, and it turns out that he might just be compatible with Zero Two; he might just be her darling. 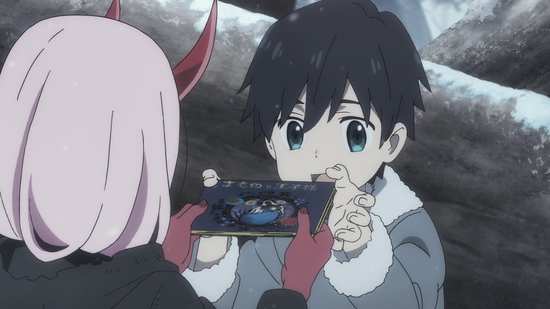 The concluding twelve episodes of Darling in the Franxx are presented across two Blu-rays from Manga Entertainment. 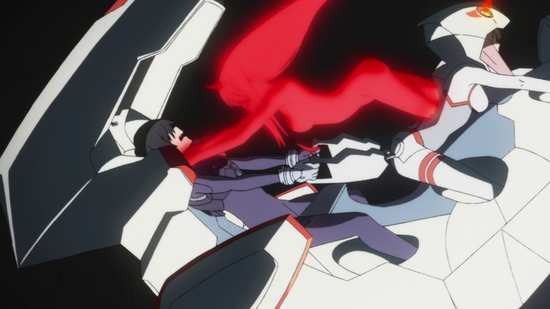 Darling in the Franxx gets a 1.78:1 widescreen 1080p transfer on these discs. The image is clear and sharp, the animation comes across smoothly and digital banding is kept to a minimum. I know Studio Trigger for Kill La Kill, Kiznaiver, and When Supernatural Battles Became Commonplace, although I have more experience with Gainax, from who Trigger was begat. I expect wild and free-spirited animation from them, but Darling in the Franxx is somewhat restrained in comparison to something like Kill la Kill. The character designs are familiar, well designed and memorable, and the world design is detailed, although the giant robots are a little on the bizarre side. The action sequences can be intense, but the Klaxosaurs have a sense of uniformity to them, in terms of colour and style, if not in design. The show looks good, and the Blu-rays do a decent job in bringing it across. 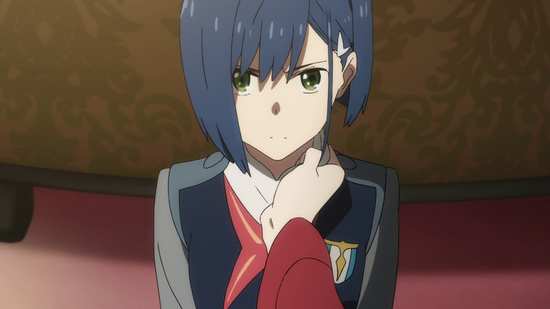 You have the choice between Dolby TrueHD 5.1 Surround English and 2.0 Japanese with subtitles and signs locked during playback. I was happy with the Japanese audio and didn’t try the dub this time. The dialogue is clear, the subtitles accurately timed and free of typos, and there are no problems with glitches and the like, The stereo is good enough to bring across the action sequences with sufficient impact, and the music drives the emotion of the story well. 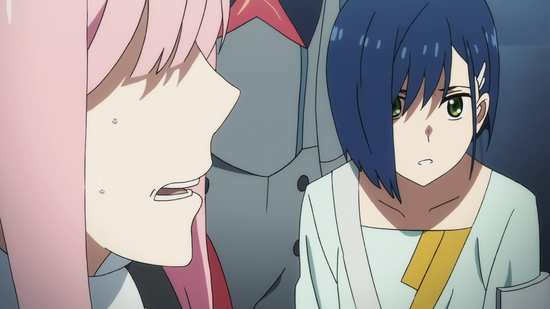 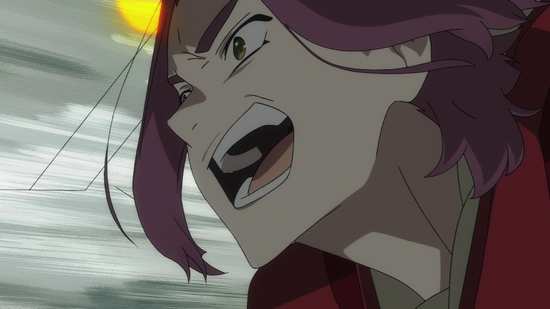 You get 6:24 of web previews for the show, the textless opening, as well as the textless ending to episode 16 with player locked lyric subtitles, and most to my taste, some Japanese extra features in the form of the two Playback Specials looking at the making of the series. These run to a total of 48:03. 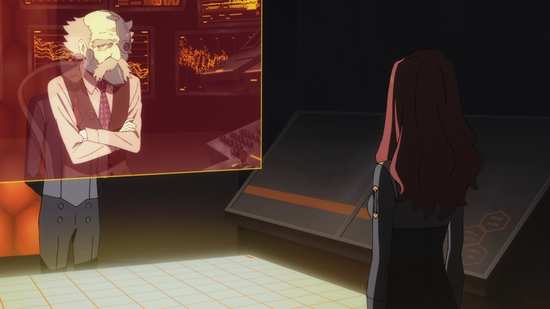 It’s not like I wasn’t warned. There are plenty of negative opinions of the ending of this show online for it to be a meme. There comes a point in the show where the story just jumps the shark, and fans invested in the story throw up their hands in disbelief, as they watch their emotional investment flushed down the proverbial toilet. The problem is that I think that point is different for everyone who watches Darling in the Franxx. It jumps over a whole school of sharks. Personally, I think it got so good at jumping the shark, that it became entertainment in its own right by the end. I went through a whole slew of WTF’s before I gave up caring and settled in for the ride. By the time the giant girl in a giant wedding dress in space shows up, you just accept that this show simply exists in an other-verse of metaphors, and just enjoy the crazy, or give up on it entirely. I chose to accept it. 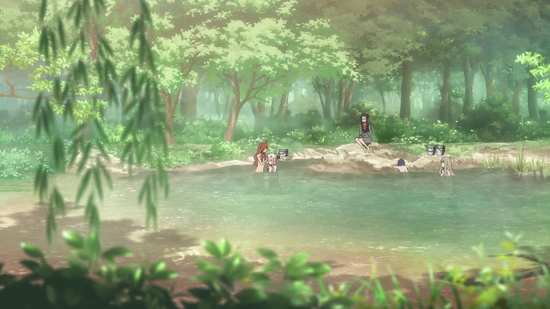 It really does come across as a cross between Evangelion and Gurren Lagann. You have the teen angst of the giant robot pilots, with the added burden of teenage sexuality integral to the operation of those robots. You have all the mystery and conspiracy theories that go with the story, and while it doesn’t go for the biblical references, it does heavily play on creation myths, and the idea of ultimate destiny, of transcendence. All of this plays out very heavily in the story, with these children piloting giant robots for adults that can barely stand their existence, against the Klaxosaur menace which is destroying humanity’s precious Magma Energy supply. The children need to be paired up to operate the Franxx robot, and the adults can’t decide whether romantic feelings between the pilots help or hinder them in their duties. The children of Plantation 13, who this story follows are a test case to see how the experiment works, and as such are treated as guinea pigs in a pretty cold and clinical way. 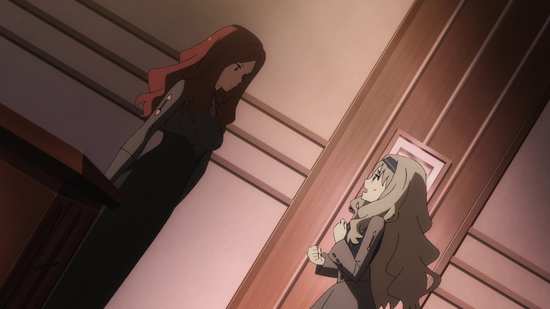 Then the Gurren Lagann homage really kicks in. Previously, I mentioned the similarity with that show when it came to the design of the giant robots, in some of the action sequences, but from the first episode in this collection, it starts following the Gurren Lagann methodology of layering revelation upon revelation, plot twist upon plot twist; so much so that discussing any episode in this collection is a potential spoiler, and any one of those plot twists might just be the shark jump that shatters your suspension of disbelief. From 002 and Hiro’s shared past, through the history of the world from the present day to the post-apocalyptic future, through the revelation of the true nature of the Klaxosaurs, to the realisation of just who APE have been working for, what they have been working towards, to the giant space girl in the space wedding dress, it’s a breathless series of plot twists. 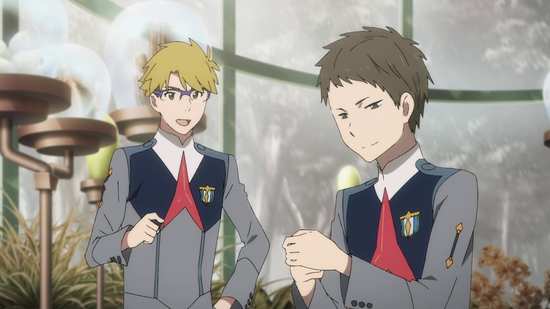 The thing is that the world of Darling in the Franxx, the future that it presents is an intelligent and well constructed one, and when the story starts to reveal its secrets, there are a whole lot of light bulbs coming on, explaining why children alone can pilot the Franxx, just why are raised in isolation at the ‘Garden’ facility, why they differ so much from and why they are isolated from adults. There’s a whole lot of thought gone into making this story internally consistent and thematically logical. It’s just that the final five episodes take you on such a roller-coaster ride of plot twist and narrative one-upmanship that it could leave you feeling queasy. My advice is to try not to concentrate on resolving the fine detail and getting it to make sense, just enjoy the ride. I actually found something quite rewarding in the conclusion and the narrative satisfying in the way the series ends, even if it doesn’t make much logical sense.