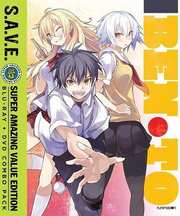 Review for Ben-To Blu-ray/DVD SAVE Edition

Now that I come to think about it, Manga Entertainment have always tried to lead the way with anime in the UK. Certainly as Manga Video, they were instrumental in introducing the art form to home video here, and while everyone seemed to pile on the DVD gravy-train around the same time, Manga were first in making an ongoing anime show succeed here with Naruto. Before, you would have said that the UK fanbase was just too small to support such an endeavour. They were also first in moving from single volume releases to complete series collections, even though the way they went about it with Heat Guy J, Tokko, and Noein was frustrating. Speaking of small fanbases, they were also first to push for Blu-ray anime in the UK, but couldn’t get the numbers to make it work in 2010. It only took a few years for that balance to shift. 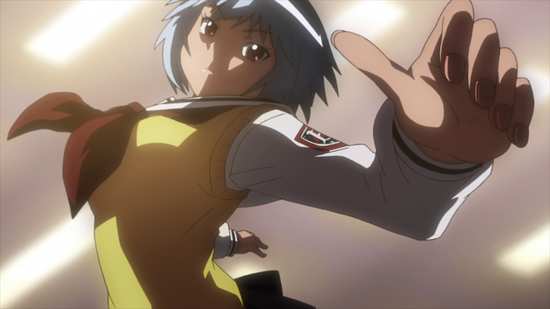 Then in 2014, they announced that two series would debut as Blu-ray only. That isn’t uncommon now, but just four years ago, it had fans up in arms at the thought of not getting Ben-to and Good Luck Girl on DVD. But in the end, with their relationship with Funimation faltering, these two shows were instead released on DVD only, and on DVDs authored locally by Manga at that. Manga haven’t the best record of authoring discs, although these two particular titles weren’t that bad, just flickering subtitles unflattering audio (for Good Luck Girl), PAL speedup and random chapters to complain about. But once you’ve had wine, why would you go back to grape juice. My second look at these shows will be on Blu-ray, and I’ve imported the Funimation S.A.V.E. release of Ben-to. 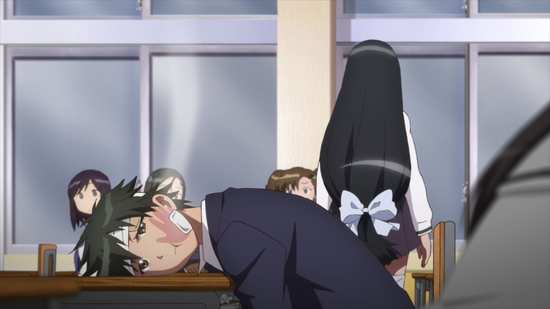 Bento is the Japanese equivalent of the packed-lunch, although the term ‘packed-lunch’ hardly does these culinary marvels justice. The creation of bento is an art form to itself. When you compare it to a ham sandwich and a packet of crisps, you’ll feel like weeping. It’s the kind of thing to get envious about, to lust after, to compete for... to beat someone half to death for? 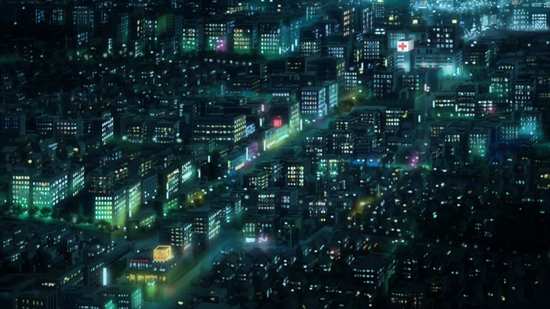 It is in Ben-to the series, as protagonist Yo Sato finds out. When he starts high school, he’s on a budget just like everyone else, and to save his meagre allowance, he decides to wait for that time at the end of the day, when supermarkets put their fresh food on sale to clear out the day’s stock, to nab a half price bento. Next day he wakes up in hospital, hungry and battered, not understanding the battered bit, and then makes his way to school with a curious girl named Hana with an injury fetish dogging his steps. When he gets to school, a strange grey haired girl names Sen warns him away from the supermarket, a warning he ignores when he tries again that evening for a cheap bento. It’s getting battered again that triggers the memory of the previous night, as he walks into a full scale battle for cheap food, and once again, the finishing move is applied by the grey-haired girl, Sen. 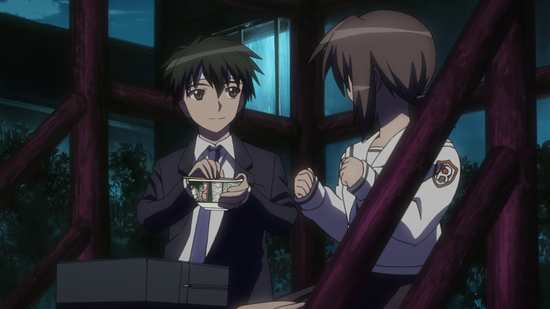 It’s not just a free for all. Sen is the president, and sole member of the school’s Half-Pricer’s Club, at least until she headlocks Yo and Hana into joining, and there’s more than one rule to this particular Food Fight Club. There’s organisation, skill and etiquette involved, and Sen is so good that she’s got a wall full of half-price stickers to prove it, and a scrap book of laurel-leaf special stickers, as well as the nickname Ice Cold Witch. Soon, Yo Sato sees the allure of fighting for one’s meals, a meal earned certainly tastes better, and he would much rather be a Wolf than a Dog. But he has a long way to go before he understands all the rules, and can be assured of a regular cut price meal. 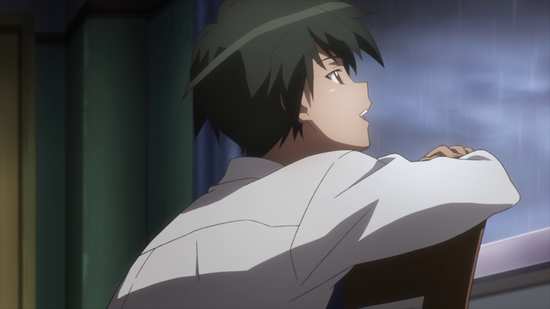 Twelve episodes of Ben-to are presented across two Blu-ray discs. This S.A.V.E. release is a combo pack, sticking four discs, 2 Region 1, 2 and 4 DVDs and 2 Region A and B Blu-rays in one Blu-ray Amaray. 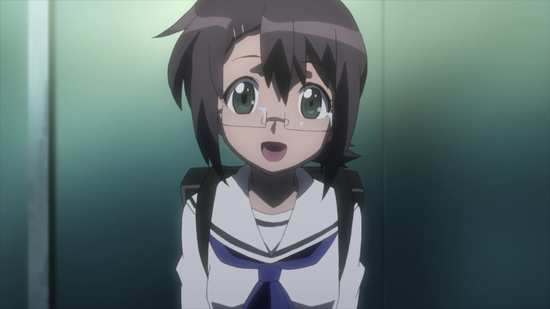 Disc 2
10. A Warm Gentle Flavour I Remember From Long Ago at My Grandmother’s House. A Japanese Dish Ease on Both Mind and Body. Plum and Dried Sardines over Rice with Plenty of Stewed Seasonal Vegetables Bento 480kcal
11. Pocari Sweat 125kcal
12. Domestic Eel Bento 790kcal

Ben-to gets a 1.78:1 widesceen 1080p transfer. The image is clear and sharp throughout, with strong colours, and with smooth animation. The high definition presentation really does bring out the best in the show, in terms of clarity and detail, and it’s a significant improvement over the DVD. The character designs are fairly generic, but the world design is detailed enough to engage, with quite understandably a lot of effort gone into the Tupperware contained culinary creations. 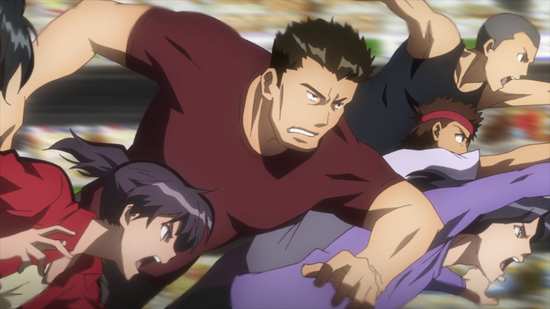 You have the usual Funimation options of Dolby TrueHD 5.1 English and 2.0 Japanese, with optional translated subtitles and a songs and signs track. I went with and was happy with the original language track as always, the actors are well suited to their roles, and the stereo offers enough separation to give the action sequences impact. Taku Iwasaki provides the music for this show, and it’s a suitably eclectic soundtrack, light and frothy for the comic bits, and a whole lot of punk sensibility for the fights. I gave the dub a try, and ten minutes in, I realised that Funimation have created a decent comedy dub, as I certainly felt that I could have watched the whole show that way. Whoever voices Hana has got her spot on. The subtitles are accurately timed and free of typos and lack even the slightest of flaws that the Manga DVDs had (they were one of the rare good ones when it comes to subtitles). 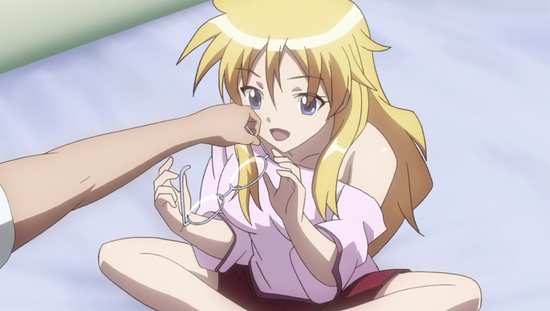 You get 4 discs in a BD Amaray, two on each inner face, and two either side of a centrally hinged panel. The sleeve is reversible if you don’t appreciate the S.A.V.E. stripe.

Both discs get animated menus.

Disc 1 autoplays a trailer for Space Dandy, and it gets two audio commentaries, the first on episode 3, with ADR director Joel McDonald and Austin Tindle (Yo Sato) and Felicia Angelle (Hana Oshiroi). The second on episode 7 has Joel McDonald Trina Nishimura (Sen), and Morgan Garrett (Shaga). 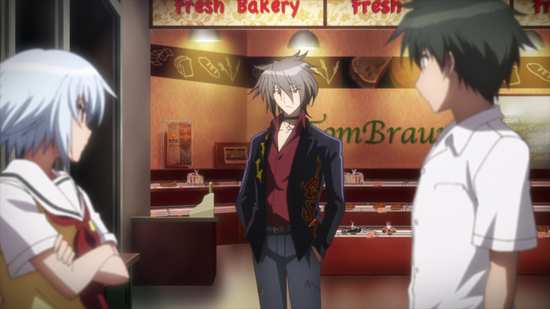 Disc 2 autoplays with a trailer for Fairy Tail Part 14.

You get the textless credits with two openings and one closing, and you get the US trailer.

There are further trailers for Tokyo Ravens, .hack//Sign, Toriko, A Certain Magical Index, One Piece, and mihcuP[at].s 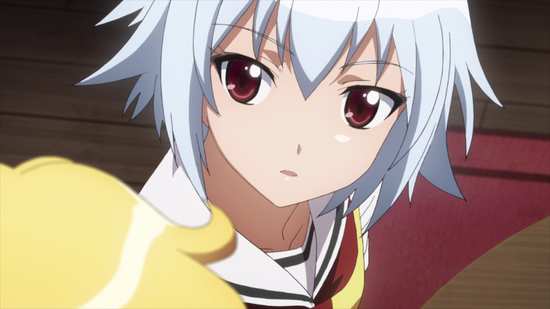 I was a little up in the air about Ben-to when I reviewed the Manga DVD, but this second time around, it’s cemented itself as a must have comedy. It’s just hilarious, and those minor niggles with the DVD are instantly resolved with Funimation’s release, spot-on subtitling and logical chaptering as well as the better picture and sound. It does have that modern anime problem of developing a storyline where none is needed; things get marginally more serious towards the end of the run, the comedy is reduced to a simmer, and the drama doesn’t quite hold the attention in the same way. It’s a matter of degree, and it certainly doesn’t fall flat at the end of its run, but it is a noticeable effect. 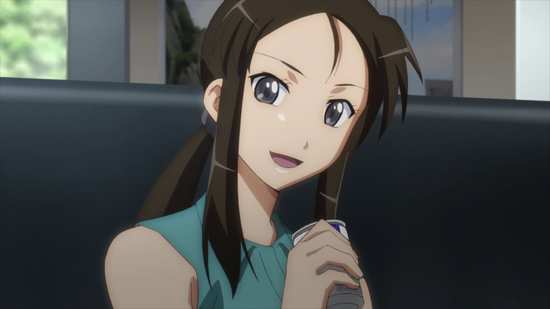 What’s special about Ben-to is that it takes an existing anime trope, or genre, and gives it an unrealistic twist, and then milks it for all the humour it’s worth. The genre is high school combat, which we have seen in loads of shows like Ikki Tousen or Tenjho Tenge, or even shows like Freezing and Sekirei. They’re basically historical warfare and clan rivalries transplanted to a modern era, but beneath the comedy and fan service, the fights are usually treated with a po-faced seriousness that borders, for me at any rate, on the tedious. 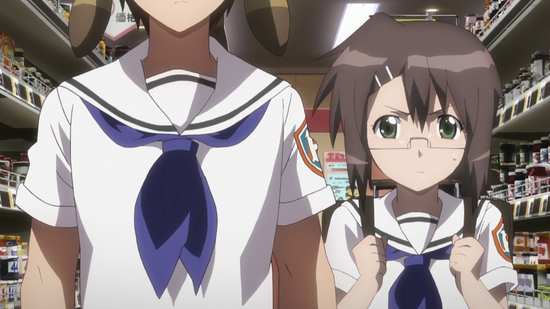 Ben-to takes this idea of high school combat, and gives it the twist of making it all fights over food, and bargain food at that. And with that, any semblance of seriousness vanishes. It becomes pure comedy. You can’t take testosterone fuelled posturing, high octane kung-fu, and videogame finishing moves at all seriously when it’s over a bowl of half price pasta salad. The more seriously the characters take it, the funnier it becomes, especially when you hear about the etiquette of bento-battling, the nomenclature and minutiae of how the fights work, the way the more successful fighters earn their aliases, and the nostalgic regard with which captured bento price labels are kept and treasured. 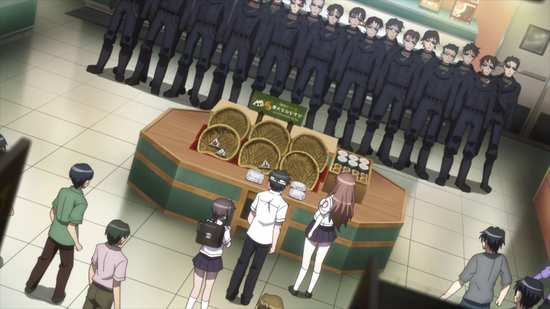 Into this set-up, Ben-to throws as wacky a cast of characters as you can imagine, which only adds to the humour. The main lead Sato is the typical milksop male, but one who finds his inner wolf when introduced to the world of the half price bento battle. Through no fault of his own he always finds himself in compromised situations, which earns him the worst possible alias. His mentor in this new world is Sen Yarizui, the understated, soft spoken girl who can kick arse harder than any other wolf, and is considered to be top of the heap. In a reverse of the usual dynamic, it’s Sato who develops an affection for Sen, and it’s Sen who remains oblivious to his intentions. Also in their club is Hana, who may not be much of a battler, but somehow manages to snag a bento anyway, but is really there to use Sato as inspiration for her homoerotic fan-fic and blog, starring ‘Saito’. That she’s hanging around Sato has been noticed by student body president Shiraume Ume, who’s infatuated with Hana, develops an immediate jealous hatred of Sato, and proceeds to beat him up at every opportunity, trying to win ‘back’ Hana’s heart. Incidentally, one of Sato’s friends in class is a masochist who takes a vicarious pleasure in seeing Sato beaten by Shiraume. 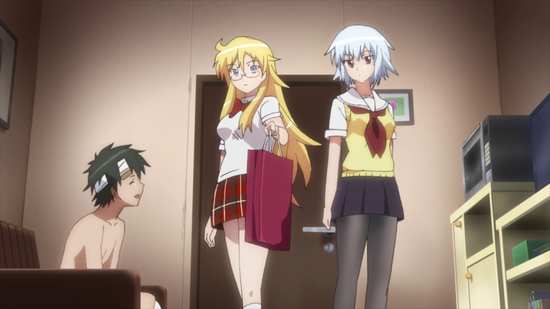 From a rival school there’s Sato’s cousin Shaga, who loves to tease him with inappropriate displays of affection, before beating him at Virtua Fighter. When she’s revealed to be a bento battling wolf as well, that complicates the situation further and introduces a new school of rivals into the dynamic. Shaga’s friend Asebi is the unluckiest human on Earth, one who transfers her luck to all around her. Shaga gets through a regular supply of defensive charms as a result, but Sato isn’t ready for the ill-fortune that ensues. And it continues from there. Ben-to has an embarrassment of riches when it comes to supporting characters that other shows would dream of, even the minor no name characters make a memorable impact in the episodes. Some of the wolves are only known by their aliases. The school security guard who insists on dealing with Sato by shoving a D sized battery up his fundament is hilarious enough by himself. 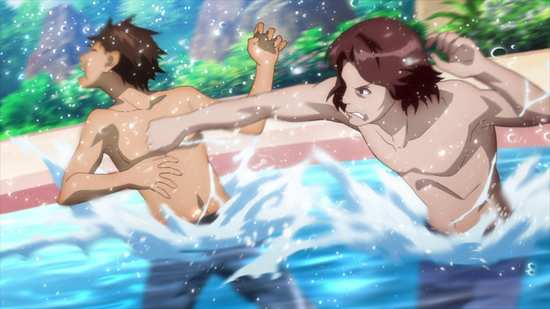 There is a whole lot of silliness that occurs in the show, a whole lot that is entertaining, and the episodes are varied and imaginative, including the requisite swimsuit episode. But it always boils down to the cut price pack-lunches, as evidenced by the episode titles. Ben-to isn’t a classic anime, it isn’t going to go down in the annals of history as a landmark achievement in storytelling, but it is downright hilarious, and offers 12 episodes of peerless (when it comes to high school battles) entertainment. I am certainly glad to have upgraded to HD on this one.