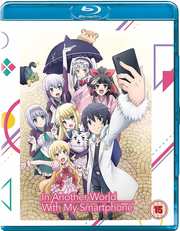 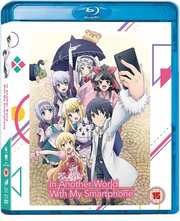 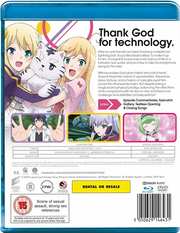 Review for In Another World With My Smartphone - The Complete Series

Would you believe there was a time when I used to complain about the onslaught of vampire shows, or anime about Nobunaga Oda? These days, it’s all about protagonists getting lost in fantasy parallel worlds, the Log Horizon and the No Game, No Life genre. They’re invariably based on light novels, and they all sell the same concept, although In Another World With My Smartphone resurrects (pun intended) a trope that we haven’t seen in quite some time. It begins by killing its protagonist, Shakugan no Shana/Buso Renkin style. 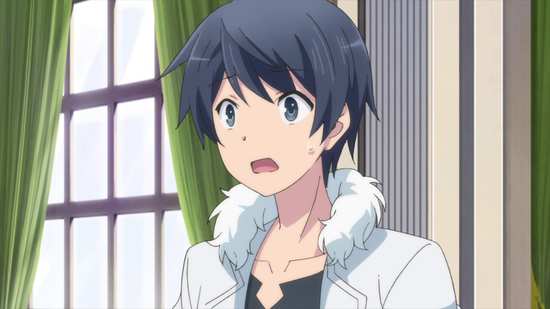 God got careless with one of his lightning bolts, and killed poor Touya Mochizuki. That wasn’t supposed to happen, and God is willing to let Touya live again, except for the snag that he can’t return to life where he departed. It will have to be another world. It’s a bit of a bonus that this new world is a magical fantasy realm, and God’s willing to give him a bit of a head start, maxing out his stats, so to speak. He’s also allowed to take just one thing from his previous life with him, and Touya chooses to take his smartphone. Now that’s the kind of magic this world has never seen before. 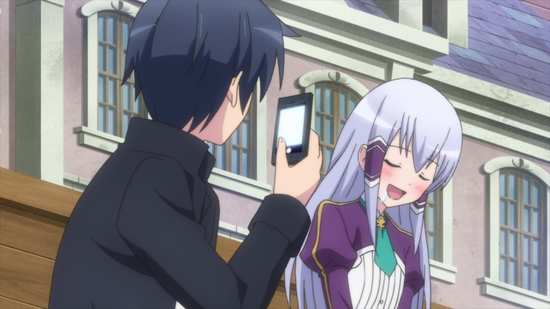 Twelve episodes are presented across 2 Blu-rays from Funimation in this combo release. I haven’t seen the DVD discs to comment.

Disc 1
1. Awakening, and Another World
2. First Journeys, and Samurai
3. Shogi Board, and Underground Ruins
4. Engagement and an Uninvited Guest
5. Slime Castle, and a New Function
6. Moving, and a Dragon
7. Nation of Beastmen, and an Observer
8. Daily Life, and Onward to Eashen
9. Oedo, and the Immortal Form

Disc 2
10. Ocean, and Vacations
11. Panties, and an Aerial Garden
12. Decisions, and with My Smartphone 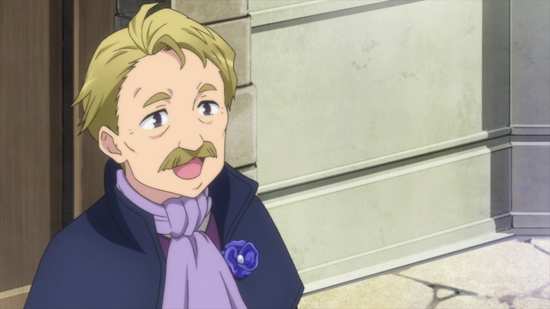 In Another World With My Smartphone gets a 1.78:1 widescreen 1080p transfer, which is perfectly fine on these discs. The image is clear and sharp, colours are strong and consistent, and there is no sign of compression, aliasing or even banding. Then again, it’s not the most challenging of animations, with simple character designs, unimpressive character animation, bolstered only by the visual effects applied to the magic sequences. Smartphone was notorious for its lacklustre animation, but it does enough to get the story across. It may as well be a 20 year old anime at this point. 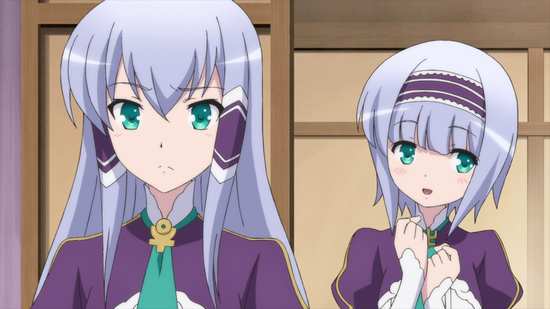 You have the choice between Dolby TrueHD 5.1 Surround English and 2.0 Stereo Japanese with subtitles and signs locked to the appropriate track. I stuck with the Japanese audio for the duration, and was happy with the performances, the action, and the agreeable, if not exactly memorable music. The subtitles are timed accurately and are free of typos. 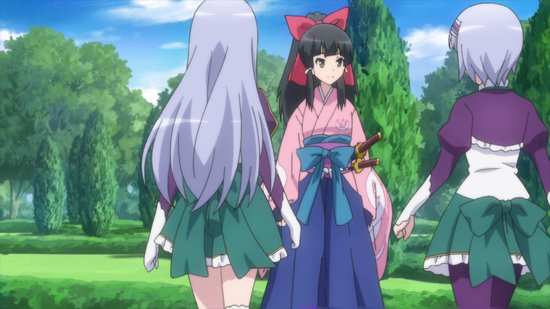 The discs present their contents with animated menus. 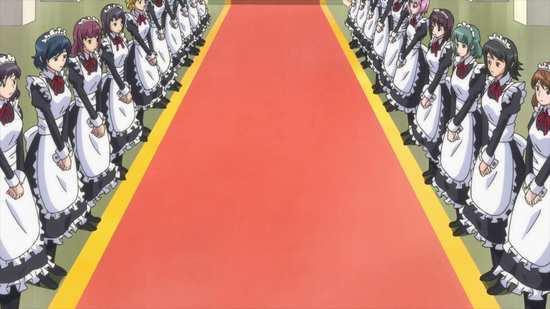 You get a 1:54 Eyecatch Gallery, the textless opening, and 6 textless closings. 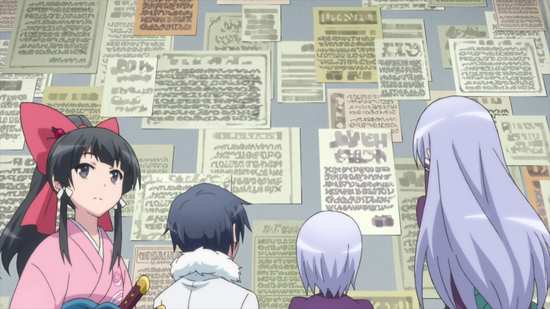 I really enjoyed In Another World With My Smartphone, which came as an absolute surprise. You see, it’s not really that good. It is yet another ‘isekai’ show based on a light novel, a genre that we are certainly not shy of in anime these days. Once again, the world the protagonist finds himself lost in is another RPG analogue, where the first thing he does is ‘form a party’ and starts taking on quests. It’s a shortcut to world design that really needs to be ditched now; there’s nothing creative or original in the whole thing. 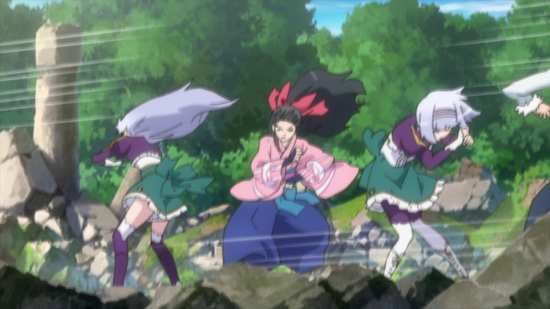 But by far the biggest problem with the show is just how over-powered the main character is. He makes the main character of Overlord, Ains Ooal Gown seem like a weed. Basically everything is served up on a platter for Touya the minute he dies and is resurrected in his new world, with God having maxed out his stats. In this world, anyone with magical ability has one, or maybe two affinities, wind magic, water magic, earth magic and so on. Touya has them all. People also can have Null magic, special spells that are unique to those individuals. Touya can use all Null spells, and he has a magical tank of energy that is practically limitless. He’s untouchable, and with the aid of his magically upgraded smartphone, he’s practically invincible. 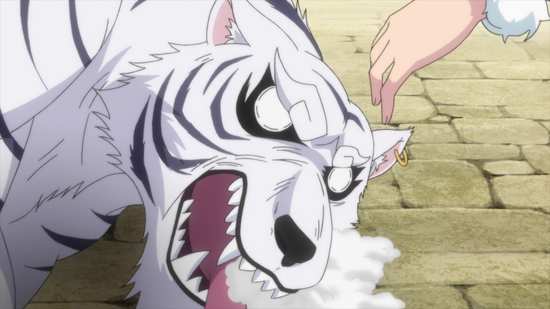 That should make for a boring series indeed, but this show is anything but. It’s entertaining, charming and likeable, a pretty decent entry in the much revisited harem comedy genre. Yes, forget the isekai, and put the trappings of magic and role playing games to the back of your mind, as what In Another World With My Smartphone is really about, is another slightly perverted, but generally harmless teen male, put in the midst of a group of clichéd anime girls (cute, tsundere, playful, adorable, quiet, quirky etc.) all of whom fall in love with him. Luckily for Touya, he’s landed in a world where polygamy is not only allowed, it’s practically expected of distinguished men. And with his magical abilities, he’s distinguishing himself from day one. 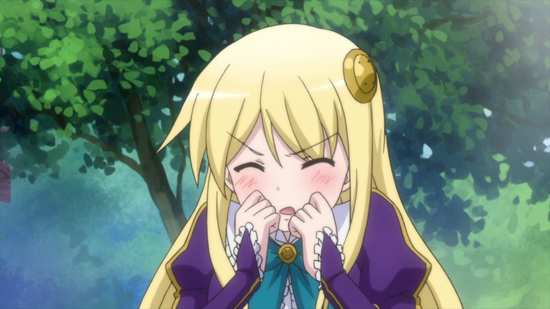 What makes this show so watchable is that the emphasis is really more on the girls than Touya when it comes to character development. His first encounter in this world is with twin sisters Elze and Linze, and with Elze a fighter, Linze strong in magic, they are good companions for his party. Not long after, he picks up an itinerant samurai named Yae, and together they go on quests. Touya may be nigh on omnipotent, but he really uses his skills to empower the girls in his party; the emphasis is on them improving their abilities and skills. Of course the show also thrives on the harem comedy dynamics, and it’s against the girls’ growing adoration that Touya’s awkward Achilles Heel comes into play. 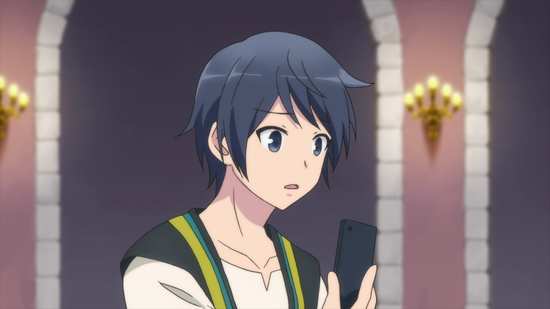 Most of the fantasy antics happen at the head of the series, and a little bit towards the end. But really, lacking any drama or thrill factor, the entertainment does come through the relationship antics, and you won’t be surprised to see the odd awkward bathroom encounter, the tradition harem boob-size envy, and the fantasy adventure show even contrives to have a vacation at the beach episode. All along the way, Touya somehow contrives to add to his harem, as more and more girls are introduced, and all of whom fall for his tepid charms. 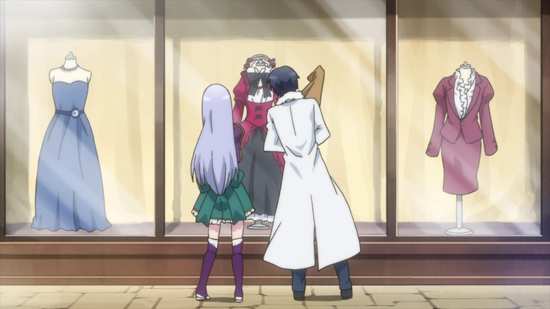 There was one way that the show might have pepped up the story, after all, a smartphone is a fragile, small object, and I fully expected the climax of the series to involve Touya losing his smartphone, Indeed, when he met a pickpocket named Renne, it seemed a certainty. Only Renne was not going to steal his phone, she was just the latest recruit to his harem. The show just proceeds without diversion from A to B, and saves its sole plot development for the post-credits coda on the final episode, the introduction of a rather enigmatic and knowing character, who has featured in the opening credits all this time, but doesn’t have the chance to do anything other than tantalise a potential second series. I wouldn’t hold my hopes up for a second series, In Another World With My Smartphone just isn’t that good. 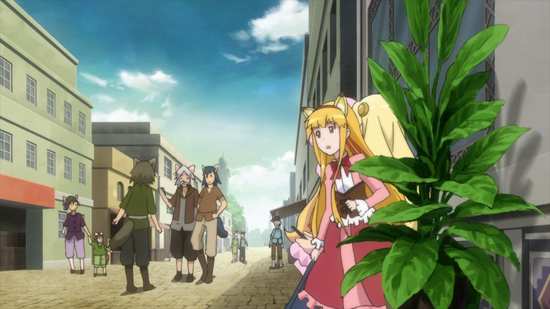 It is good enough to watch though, strictly through its likeable characters, and charming harem comedy antics. It’s harmless fun, and a relaxing way to spend half an hour of an evening.