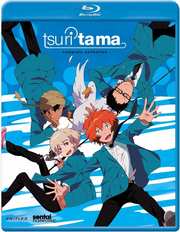 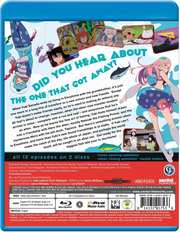 When it comes to anime released in the UK today, it’s a case of Blu-ray as standard, and DVD as well for selected titles. But just four years ago, it would have been the reverse, as anime distributors were still in the process of transitioning to high definition releases. Back then it would have been the fan favourites and the crowd pleasers that got the HD releases, while the quirky, niche titles were released here as DVD only. That’s particularly annoying for me, as I prefer the quirky, niche titles as they at least tend to offer something different. So there’s a whole period when I was watching UK shows on DVD and then rushing off to import them, as Blu-ray versions were only available overseas. That’s why for my first re-watch of Tsuritama, I’m now watching the US Blu-ray instead of MVM’s DVDs. 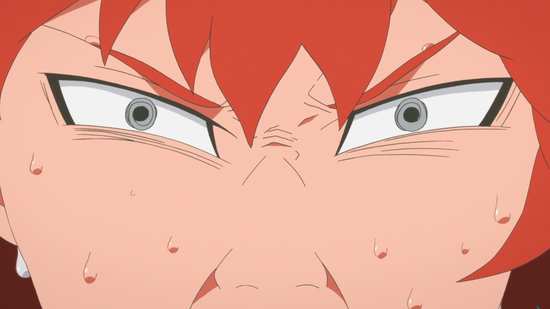 Yuki Sanada is the socially awkward one in Tsuritama. His grandmother Keito is something of a free spirit, which has resulted in Yuki constantly transferring from school to school, never staying long enough to make any friends or settle down. Much as he dotes on his grandmother, it does mean that he doesn’t communicate well, is introverted and over-analysing, and tends to freak out under pressure, feeling as if he’s drowning. They move again at the start of this series to the island of Enoshima, and while he starts off with the best of intentions, the desire to make a change in his personality, an awkward encounter on a bus on the way to school throws him off, and it looks like he’s going to be the freaky weird loner in class again. 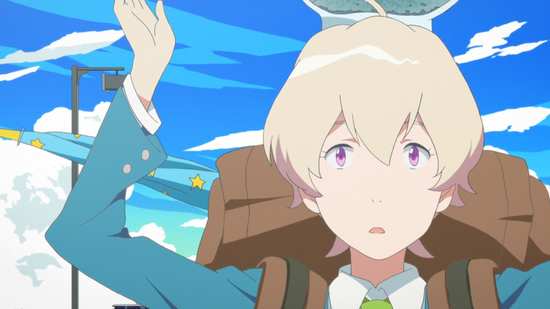 And then another new transfer student walks into class, hits him in the face with a jet of water from a water pistol, and the next thing he knows, he’s just finished a duet with the kid, and he’s now half of the funny weird duo in class. Haru is the other transfer student, and he’s even transferred into Yuki’s life, moving in with him and Keito, and Haru’s an alien. Seriously, this otherworldly visitor wants to be friends with Yuki as he’s decided that Yuki is the one to help him catch a certain fish. Of course they’ve got to learn how to fish first, which is when Haru water-pistols Natsuki Usami into teaching them. Natsuki’s another standoffish loner student with a difficult home life, but who has a talent for fishing. And meanwhile from a distance, a mysterious Indian named Akira Agarkar Yamada and his pet duck Tapioca, members of a shadowy organisation observe this alien infiltration... 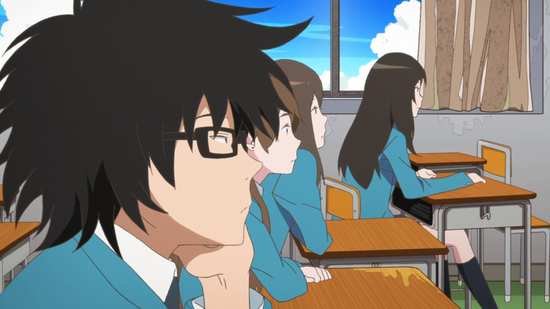 12 episodes of Tsuritama are presented across 2 Blu-rays from Sentai Filmworks. 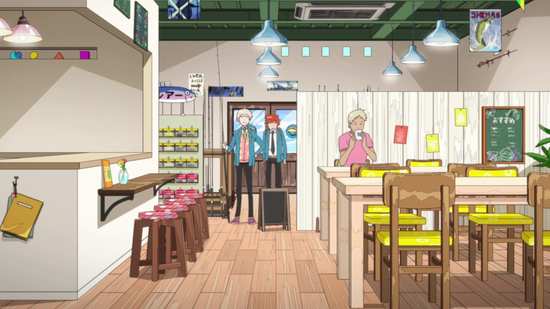 Tsuritama gets a 1.78:1 widescreen 1080p transfer on these Blu-ray discs. The image is clear and sharp throughout with strong colours, and the high definition presentation shows off the animation to excellent effect. You get the expected clarity, but you can also appreciate the extra detail. The colours just pop, which makes the collage-like backgrounds all the more impressive. The animation is high quality and very appealing, with likeable character designs, nice attention to detail, and a whole lot of fishing. There is a bit more thought gone into the anime than usual, with Yuki’s freak out face offering a lot of variety and detail in its transformations. There are also nice touches such as showing the feeling of drowning that he gets when he’s socially overwhelmed, and the replay of recent events he sees when he’s trying to sort out his feelings. There’s also the Enoshima dance to appreciate, immortalised in the opening animation. 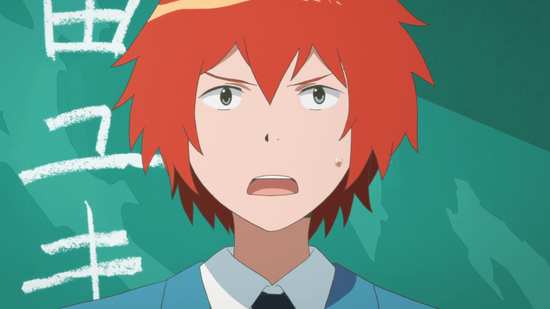 You have the choice between DTS-HD MA 2.0 English and Japanese. You get English subtitles and a signs only track locked during playback. The dialogue is clear throughout, the music is quirky and apt, with a couple of excellent theme songs for the show, and there’s sufficient stereo separation to offer ambience, and space for the show’s action sequences. The subtitles are timed accurately and free of typographical errors. And I love the tabla and bansuri music when the Duck organisation is in full flow. My preference as always was for the Japanese audio, but I gave the English dub a try, and to my surprise for a Sentai effort, at no point was I compelled to turn it off and run from the room screaming... 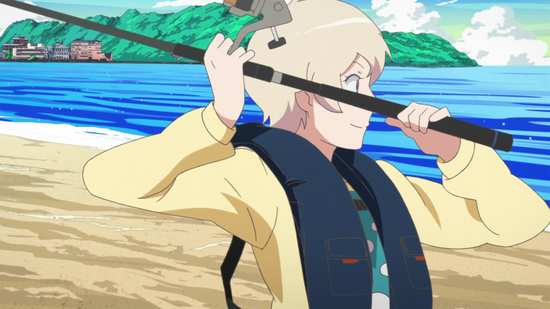 The discs present their contents with static menus. Each episode is followed by a translated English language credit scroll, but there are no next episode previews.

The only extras are on disc 2, and amount to the textless credit sequences. Otherwise you’ll find trailers for Kokoro Connect, Medaka Box, Monster, and Mysterious Girlfriend X. 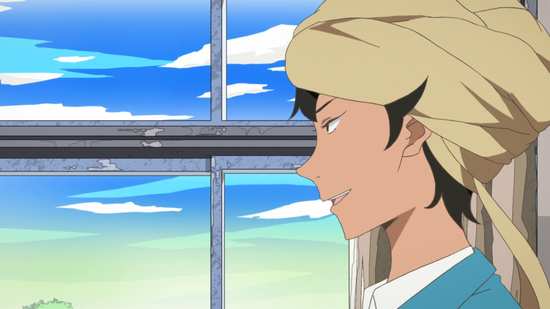 Tsuritama has grown on me since I last watched it. In my review for the DVD I said that its slice of life feel didn’t quite gel with the overarching storyline. I no longer feel that way, and I really got how the story developed from the opening episode this time around. I love the offbeat, I love oddball humour, and I always make time for the trivial. It’s why I have an appreciation for slice of life shows, and I love those anime that can step away from a storyline just to indulge in some inconsequential fun for a minute or three. That is one reason why I love Niea_7, and it was exactly that style of anime that drew me to Tsuritama, which starts off in much the same vein, albeit replacing the characters stuck in the doldrums of a recession with characters obsessed with fishing. Tsuritama even has a turbaned Indian in a key role as well. 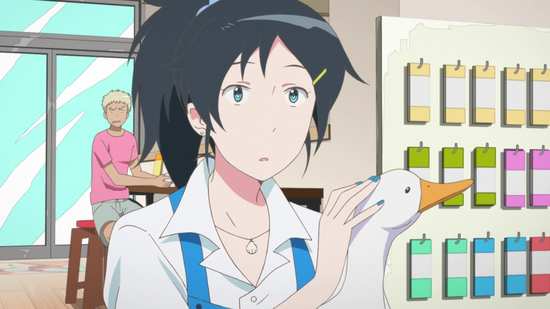 The strength of the show still lies in the characters and the way that they interact. It’s about relishing the comic moments, the odd silliness, the gradual development and appreciation of comradeship and friendship. The really important narrative comes down to the character arcs, which in this show are Yuki’s gradual overcoming of his social awkwardness, learning to make friends, and Natsuki sorting out his troubled home life. Haru is the bizarre alien catalyst that comes in like a breath of fresh air, a whirlwind that transforms all around him for the better. Akira on the other hand is the slight force for negativity, the representative of the secret organisation, Duck, who’s investigating odd occurrences, and who first focuses on the trio of Natsuki, Yuki and Haru from afar, and then gradually becomes part of the group. 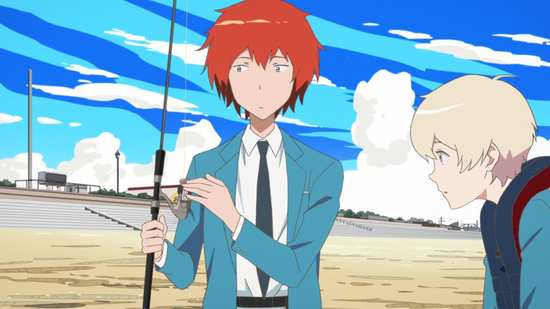 The one thing they all have in common is fishing. Haru’s come to Earth to catch a special fish, and decides that Yuki is the one that will catch it. Since Yuki doesn’t know the first thing about fishing, Natsuki is the one to learn from, and Akira loves fishing too. It’s easy to get lost in the terminology and intricacies of the noble art of angling, and take a vicarious pleasure as they slowly succeed in their goals. There’s also a richness of supporting characters in the show, I particularly love Yuki’s grandmother Keito, a delightful, whimsical and wise character, and in a medium where youth is usually emphasised, it’s great to see such an appealing older character. The local boat captain who takes our foursome out fishing has a crush on the owner of the local fishing supplies shop which is played out to comic effect. Natsuki’s family too is delightful, even if father and son don’t see eye to eye. 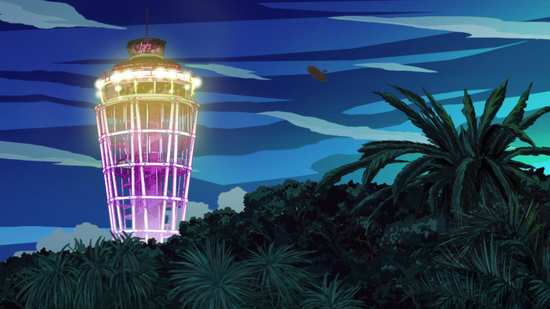 There’s a whole lot of comic value in the Duck organisation, while the main character has some interesting traits too, all of them expressed visually. Yuki’s freak face is a sight to behold, and the way his sense of pressure is displayed is very inventive. He also does his best thinking when he’s on the verge of falling asleep, and he replays the day’s events in his mind. Tsuritama unfolds in a very natural and appealing way, little vignettes of amity and growing bonds of friendship over the fishing rods, and we watch the character journeys as they go through their ups and downs. It’s just the kind of show I love. 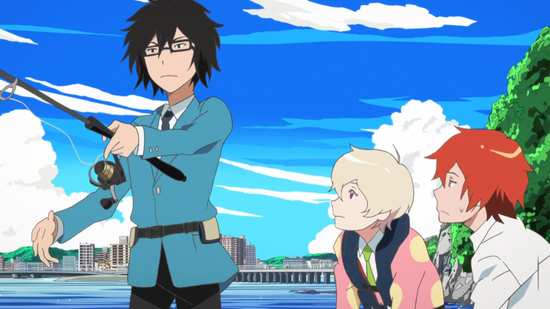 Episode eight still hits with its infodump, and Haru spells the plot out for everyone. From this point on, Tsuritama follows a more conventional narrative, with the world in peril as the underwater menace keeps compelling people to drop everything else and just do the Enoshima dance. If our four heroes can’t fish the ‘villain’ from the water, soon the whole world will be eternally dancing. They’ve figured out the right way to do it, but unfortunately the Duck organisation would rather use the traditional means of dealing with aliens, great big missiles and a naval attack. 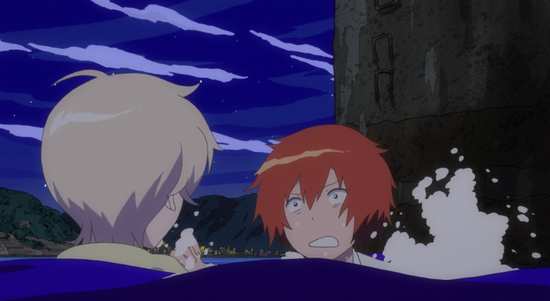 When I watched the DVD, I felt that losing the character focus for the final episodes detracted from the show, but this time I didn’t get that sense. It still felt like a character driven story to me, and the friendship between the four main characters lay at the heart of how the story panned out, even if the focus of the story was no longer as small and personal in scale. 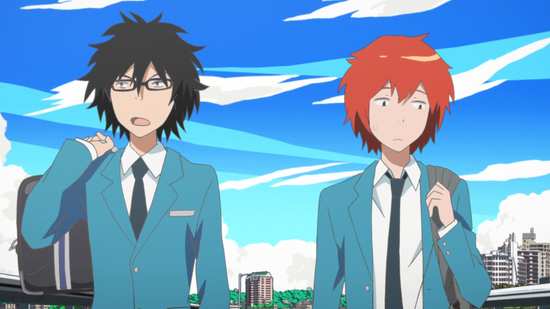 Tsuritama is great fun, and let’s face it; there aren’t a lot of wacky slice of life comedies about weird aliens and fishing out there. If you want to try a little something different, then Tsuritama is the show to watch. Watching it on Blu-ray is the way the show should be seen, as the high definition presentation really does justice to the show’s unique visual aesthetic, while simply hearing the audio at the correct frame rate without a pitch shift makes a world of difference.