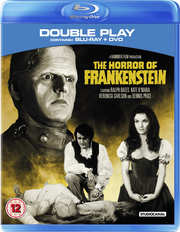 The Horror of Frankenstein (Blu-ray Details)

Review for The Horror of Frankenstein 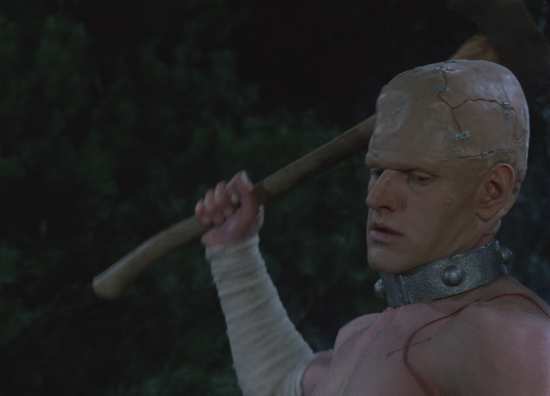 ‘Horror of Frankenstein’, a later period Elstree Hammer, directed in 1970 by Jimmy Sangster (who also co-wrote the screenplay, having written ‘The Curse of Frankenstein’ in 1957) is a surprisingly good film. Despite the absence of Peter Cushing as The Baron, with Ralph Bates stepping up to the plate and giving it a curiously effective new spin, as well as a startling departure from Karloff’s Universal portrayal, it’s a great iteration of the classic tale in its own right, arguably a little closer to Mary Shelley’s original tale. 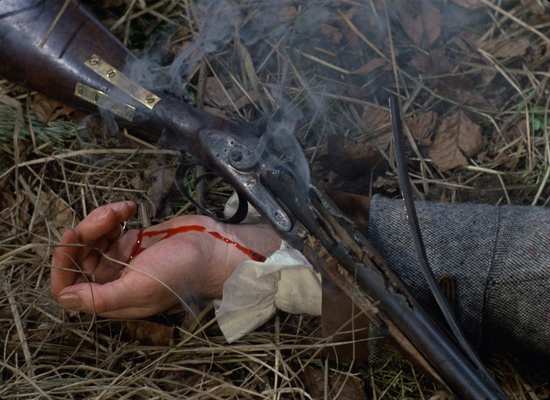 Arrogant young Victor Frankenstein (Ralph Bates) is something of a prodigy. He is already outwitting his school masters and has every intention of taking his passion for maths and science to the next level at University in Vienna. However, his father, Baron Frankenstein, himself a cruel and selfish man who uses his time hunting and bedding his young maids, objects to the idea. 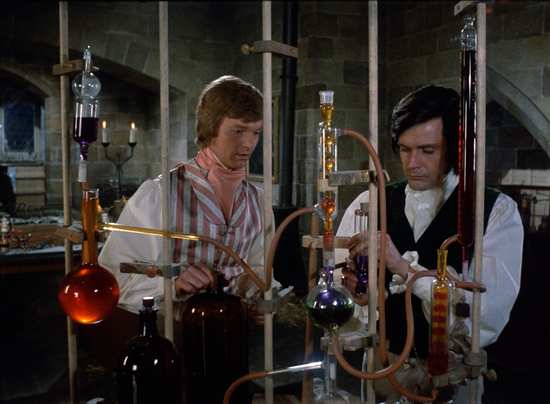 So Victor, who will have nothing stand in the way of his scientific progress, sabotages his Father’s rifle which explodes when fired, killing him instantly. Coldly satisfied, Victor not only inherits the castle estate and his Father’s title, he can now progress to Vienna. He spends six years progressing his studies until, after impregnating the Dean’s daughter, and refusing to wed her, he returns to the castle, persuading a bright young colleague, Wilhelm, to join him in order to participate in some scientific research that Victor has planned. 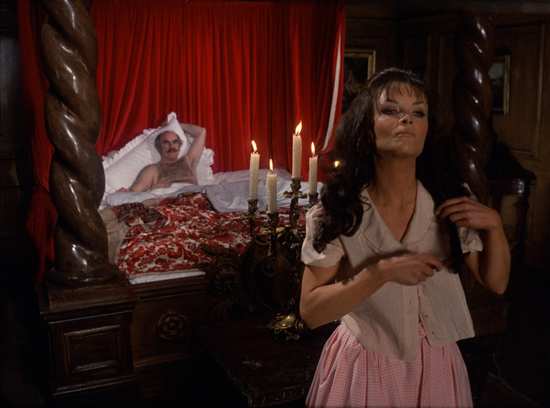 When the they arrive back home, as they ride towards the castle, they witness two highway men robbing a coach which is carrying his old friend Elizabeth and her father. Victor and Willhelm intervene, shooting their leader and chasing the others away. Once the coast is clear, Victor beheads the robber and retreats to his castle to begin his grisly research – into the revival of dead tissue.

In the meantime, all his needs are taken care of with the aid of his father’s housekeeper, Alys (Kate O’Mara on steaming top form) both in and out of the bedroom, and he and Wilhelm set about their research. 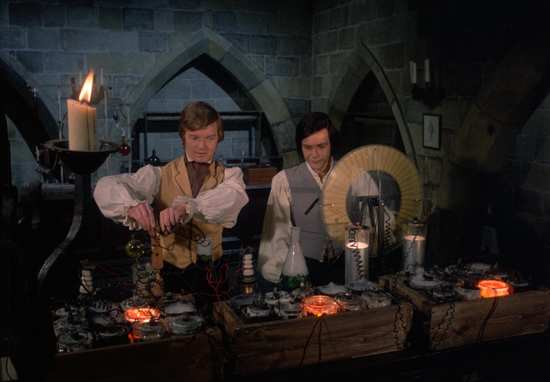 Before long, the body count starts to increase, with stories of missing villagers increasing, drawing a police chief (an old school friend of Victor’s) to question Victor and Willhelm. When Willhelm starts to suspect that all is not well, he is simply added to the pile and Alys starts to suspect Victor’s dark secret too – using her knowledge to blackmail him. Not a wise idea when you are all alone on a dark castle with a sociopath like Victor. 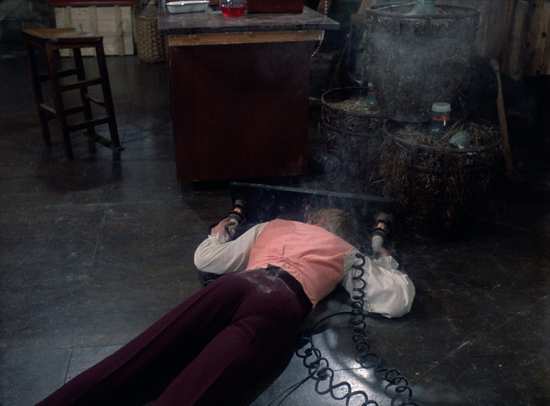 Eventually, the culmination of all the work is brought to life with the ‘monster’ in the form of body builder Dave Prowse, now best known as ‘Darth Vader’ or course. The monster has very little make up – just a few scars and modest squaring of the head; a far less extreme version than Karloff’s. Prowse does a great job staggering around, lifting people above his head and gurgling his mono-syllabic replies to his master. But all is not well with him of course, and he sets out on a murderous rampage of his own – causing Victor further problems. 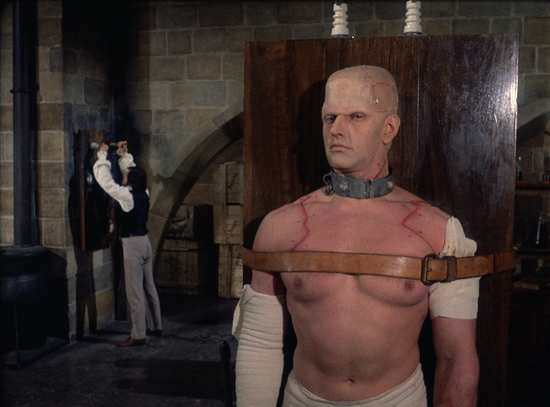 Ralph Bates turns in the performance of his career as the arrogant young Baron and the supporting cast, navigating an excellent script, do a first-class job too. Graham James, Kate O’Mara, the beautiful Veronica Carlson and even Denis Price (‘Kind Hearts and Coronets’, ‘School for Sccoundrels’) enjoy themselves enormously in roles that give each plenty of scope.

Bate’s character is particularly evil – cold, calculating and callous; all the traits of a true psychopath – and Bates slightly dead-pan approach to performing is perfect. Although some of the film might err on black humour (his disposing of Elizabeth’s boring father in order to access his academic brain being just one of many examples), it has enough genuinely shocking and grisly moments to be classed as horror. 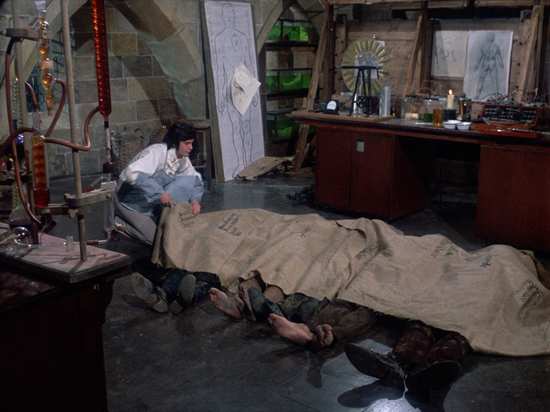 Studio Canal have done a great job with the transfer; a dual layered, high bit-rate, flawless transfer which makes the film that improves on the previously issued DVD release enormously. It’s a complete pleasure to watch. Audio is excellent too, a DTS-HD 24-bit track with crisp, clear dialogue and an impressive score from Malcolm Williamson. There is a German dub too (as well as German and English subs) but I can’t comment on how effective it is. 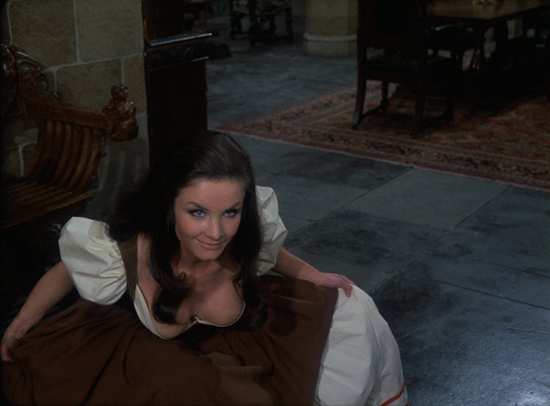 Also included is a very worthwhile 18-minute featurette; ‘Gallows Humour: Inside The Horror of Frankenstein’ that features the effervescent and thoroughly well-informed Jonathan Rigby (author of English Gothic), Kevin Lyons (Documentation Editor at the BFI and all round good egg), an John J. Johnston discussing the film’s production, its history, its dark humour and what they each most like about it. 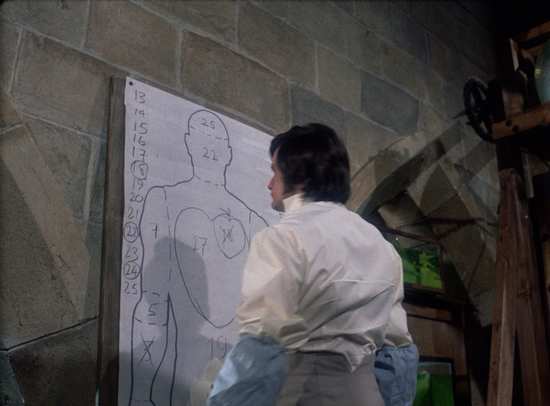 ‘The Horror of Frankenstein’ may not be classic Bray studios’ material, but it is most definitely one of the finest from its 1970s output. Ralph Bates doesn’t even try to fit into Peter Cushing’ shoes but rather makes the role all his own in what may be the darkest portrayal of Dr. Frankenstein of all time. Sadly the same cannot be said for Prowse’s monster, though it remains a unique and brave attempt at reinvention. Whatever the case, the film is a lot of fun, highly entertaining and, on this release, looks a million dollars. Which in old money, it certainly wasn’t. Highly recommended.