With wall to wall superhero movies in the cinema, and certainly plenty of superhero shows on TV, you might think that we’ve reached a saturation point. Even anime seems to have a couple of series each year with some sort of superhero outside the usual ninja/vampire/giant robot categories. Ever since shows like Darker then Black, and Tiger & Bunny, anime and manga creators have realised that they can play in the same ballpark as their US counterparts. But creators do find a way to keep things fresh and exciting. Take One Punch Man for instance, and its ennui of a hero who is just too damned powerful to find a challenge. Charlotte takes a leaf out of Heroes' book, with its power users small scale and mostly under the radar. It adds a layer of whimsy by making these powers not too useful, at least not immediately. After all, possessing someone for the entirety of five seconds, having superspeed but no control, or being invisible to just one person at a time, all hardly seem worth donning a cape for. 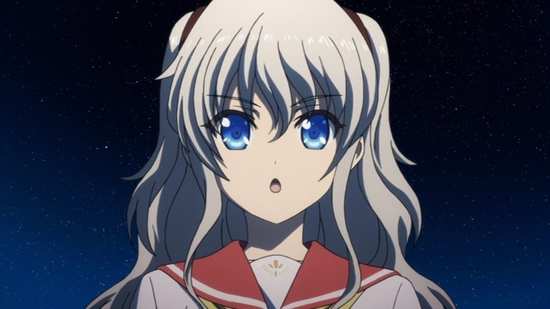 Yu Otosaka has an easier life than most teenage boys. After all he has a superpower, which has recently manifested. It’s not much of a power, taking over the body of anyone in his line of sight, for just five seconds, during which his body will be collapsed unconscious. It’s not good for much, except cheating at exams, getting into an elite high school, and he’s even figured out a way to make the girl of his dreams fall for him. All of that changes though when a girl from another school, Nao Tomori threatens to unmask him. 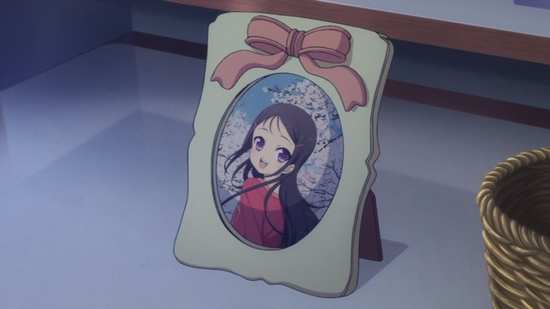 She essentially blackmails him to transfer to her school, along with his kid sister Ayumi. He’s not the only one with imperfect powers. A significant minority of teenagers develops abilities, and Tomori is one of them (she can become invisible, to one person at a time), and as head of the student council at Hoshinoumi Academy, she’s on a mission to find and convince these gifted children to transfer to her school. For one thing, the superpowers are a temporary thing, which vanish in adulthood. The second thing is that Hoshinoumi Academy is a safe environment for teenagers with powers, as the alternative is almost unspeakable, being found by the government, the military or scientific researchers. That’s something that Tomori has personal experience of, as powers tend to run in families. Now Yu Otosaka is part of the student council in Hoshinoumi Academy, reluctantly helping Tomori to find and rescue more power users. 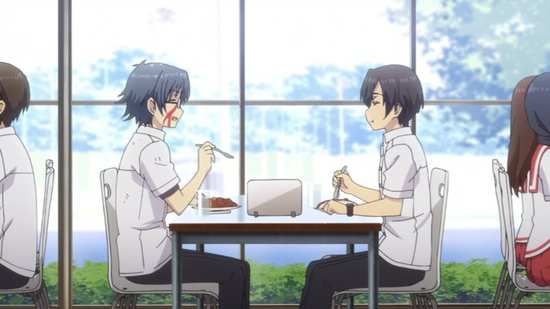 The six concluding episodes of Charlotte are presented on this Blu-ray disc from All the Anime. It’s a combo release so you get the DVD disc as well. 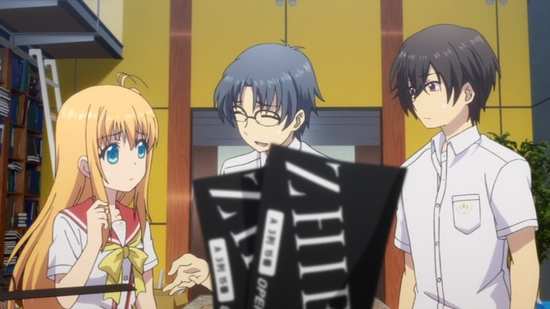 Charlotte gets a 1.78:1 widescreen 1080p transfer. The image is clear and sharp, and given the Aniplex source, it’s a splendid presentation of an anime, with no signs of compression or digital banding. The character designs are excellent, the line art smooth and pin sharp, while the world design is detailed, with an eye to realism. The joy of course is in P.A. Works’ animation, which really does focus on the characters and ensures that their personalities and emotions are confidently evoked through how they move. Once again, Angel Beats will be your touchstone as to how this series plays, with character quirks expressed through animation in an endearing way.

The images in this review are taken from the DVD version. 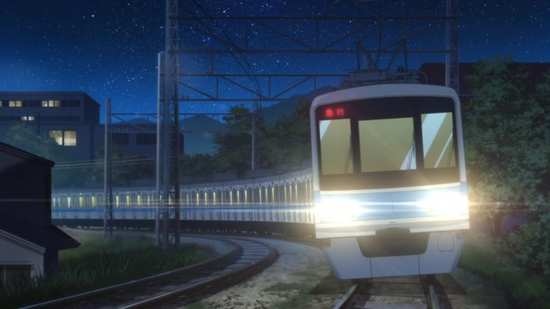 You have the choice between PCM 2.0 Stereo English and Japanese with optional subtitles and a signs only track. The audio is fine, no problems with any glitches or drop outs. The characters are cast suitably for their archetypes, the action comes across well, making full use of the stereo soundscape, and the music is typically exceptional for a Jun Maeda creation. And Lia does provide the opening theme. I gave the dub a quick try and it too is one of the good ones, certainly I was impressed with the voice actor performances, and the suitability to the characters. The subtitles are accurately timed and free of typos, and this time there is no problem with font size, although placement of the caption still varies from scene to scene. 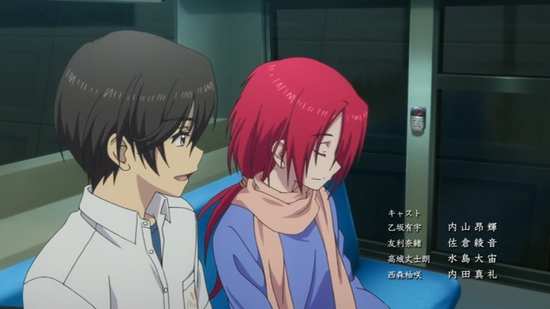 This is a combo release; you get the DVD as well, one disc which presents the 6 episodes in 1.78:1 NTSC progressive anamorphic, with DD 2.0 audio. In terms of extras, this time they are identical across both DVD and Blu-ray discs.

The Blu-ray disc which I review here boots to a static menu.

You get the Textless Credits, one of each, the Web Previews, the English Trailer, and 5:24 of English Bloopers. 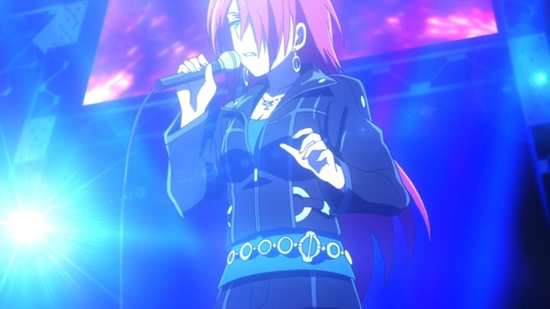 The big extra here is the Special Episode: The Strong Ones which runs to 24:06. This episode with Tomori and Yu helping a little girl with a problem with broadcast telepathy is fun, entertaining, and fits right in with the first half of the series, although there is a bit of foreshadowing at the end that serves as a bit of a disappointing reminder of what Charlotte eventually becomes.

I haven’t seen any of the packaging or physical extras with this release to comment. 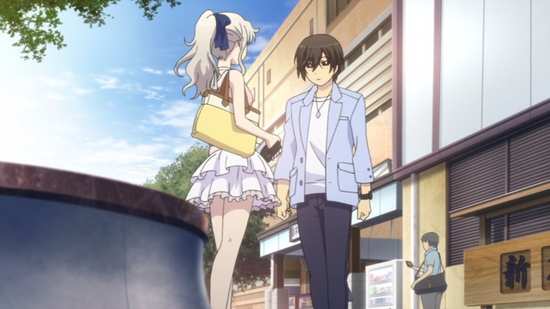 Remember Heroes? One season of television brilliance, “Save the Cheerleader, save the world”, followed by a rapid descent into mediocrity, followed by a further descent by the time we got to the abortive revival, Heroes Reborn. It seems that once they’d saved the cheerleader, they didn’t really know what to do with the show, and one of the biggest problems they had was Peter Petrelli, the power sponge, the perfect protagonist when faced with the similarly acquisitive Sylar, but thereafter something of a liability to the writing. 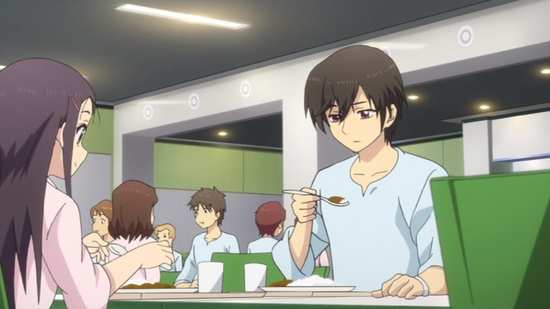 The reason why I review Heroes is that Charlotte goes exactly the same way, managing in 13 episodes what Heroes did in four and a bit series. It goes from seven episodes of a great premise and entertaining show, through three episodes of interesting but obviously contrived reset, all the way to three episodes of deathly plummet into has-been obscurity. The bonus episode has the dual effect of reminding you first of how good the show was, and then of how bad it gets. The thing is that I really can’t explain just why Charlotte gets so bad without going into spoilers. 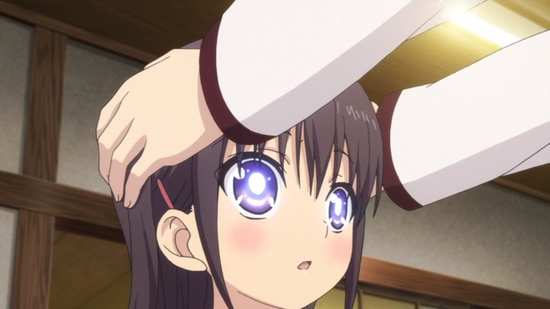 Yet Charlotte would have worked if episode 10 was the final episode. It might even have been improved if the story had been expanded to fill the thirteen with its penultimate storyline. Charlotte was a fun take on the superhero genre up until episode 6. Its premise of children briefly possessing abilities, a school which serves as their sanctuary and the student council tasked with finding new ability users to protect was a good one, although what made the show so appealing was the mundane and often silly nature of the abilities. All the while little hints of back story were inserted into the plot, most notably a ‘forgotten’ third member of Yu’s family. 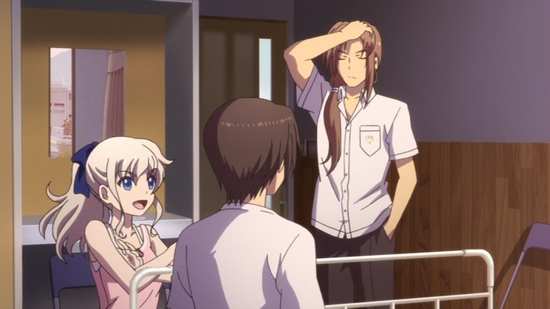 Episode 6 was where everything changed, a personal tragedy for Yu that sent him off the rails. I thought Charlotte was quick to apparently deal with it in episode 7, having Tomori go after Yu and ‘rescue’ him from himself, and I might have thought that the consequences would continue further into this second half, but episode 8 sees him all cleaned up, head on straight, and back at school. This episode is there to wind up another story arc, that of Tomori’s brother, which coincides with the arrival in town of Tomori’s favourite band, Zhiend. It’s during a concert in episode 9 that Yu has an infodump flashback which reveals the whole story, and gives him the means to reverse that tragedy, which is what happens in episode 10. 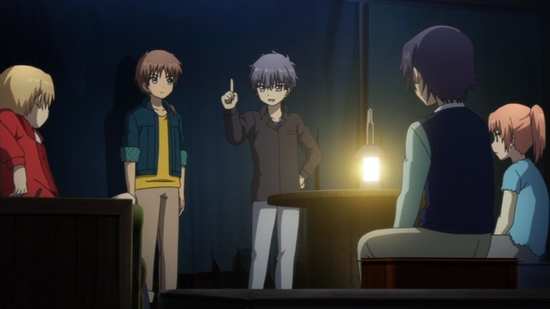 Now if they had managed to stretch this out to the end, make Yu’s recovery feel more organic and believable, lose that half episode of exposition, and replace it with something more fluid and natural, it might actually have made the end of that story arc believable, and less of a reset. And the show would have ended on a happily ever after. Instead it has another three episodes of story to fill, and quite frankly it takes it on a ridiculous, downbeat, and wholly contrived direction. I felt cheated by the ending, in a show that ultimately felt pointless. 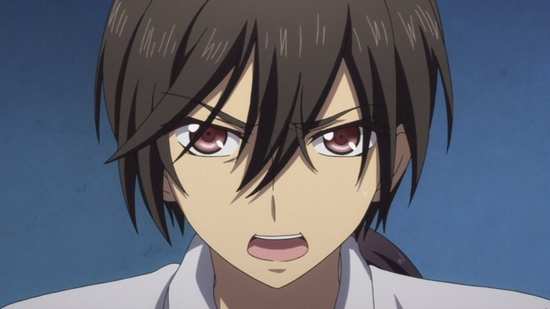 Charlotte could have been fun, but it wasn’t. It could have been dramatic and emotional, but it ultimately wasn’t. Instead it was a show that made me want my five hours back. If you are interested in Charlotte, you might consider watching up to episode 10, and then just switching off. It’s better that way.