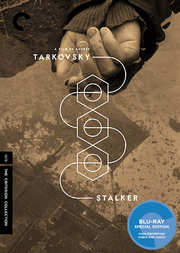 Synopsis:
Andrei Tarkovsky’s final Soviet feature is a metaphys­ical journey through an enigmatic postapocalyptic landscape, and a rarefied cinematic experience like no other. A hired guide—the Stalker—leads a writer and a professor into the heart of the Zone, the restricted site of a long-ago disaster, where the three men eventually zero in on the Room, a place rumored to fulfill one’s most deeply held desires. Adapting a science-fiction novel by Arkady and Boris Strugatsky, Tarkovsky created an immersive world with a wealth of material detail and a sense of organic atmosphere. A religious allegory, a reflection of contemporaneous political anxieties, a meditation on film itself—Stalker envelops the viewer by opening up a multitude of possible meanings.

Special Features:
•New 2K digital restoration, with uncompressed monaural soundtrack on the Blu-ray
•New interview with Geoff Dyer, author of Zona: A Book About a Film About a Journey to a Room
•Interviews from 2002 with cinematographer Alexander Knyazhinsky, set designer Rashit Safiullin, and composer Eduard Artemyev
•PLUS: An essay by critic Mark Le Fanu