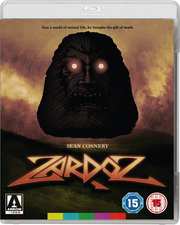 Synopsis:
Between the Hollywood productions of Deliverance and Exorcist II: The Heretic, John Boorman embarked on one of the strangest films ever to come from a major studio.

The year is 2293. Society as we know it has broken down centuries ago with the Earth’s population split into three classes: the Brutals, who work the land and are forbidden from reproducing; their overseers, the Executioners; and the highly civilised Eternals, who are protected from the outside world by a force-field. But when an Executioner, Zed (Sean Connery, light years from James Bond), smuggles himself into their isolated paradise, he risks unbalancing the system and threatening the status quo…

Photographed by Geoffrey Unsworth (2001: A Space Odyssey) and designed by Anthony Pratt (Excalibur), dystopian science-fiction has rarely looked so beautiful – or been so odd – as it appears in Zardoz.