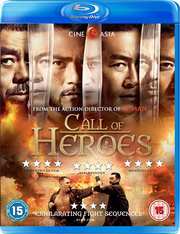 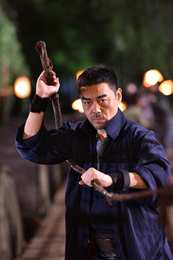 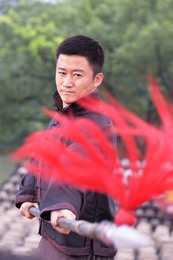 Review for Call Of Heroes

Cine Asia has risen like the proverbial phoenix from the flames. In their first incarnation as Hong Kong Legends (and the sister label Premier Asia), they brought some classic kung-fu movies from the seventies, eighties and nineties to this brand new format called DVD, back in the early 2000s. Films from stars like Bruce Lee, Jackie Chan, Jet Li and Sammo Hung, loaded with extra features including the legendary Bey Logan commentaries, all given the best possible presentation. They also delivered the occasional new feature film as well, but there’s only so much classic cinema worth releasing, and by the end of their tenure, the classic appellation was tenuous at best. 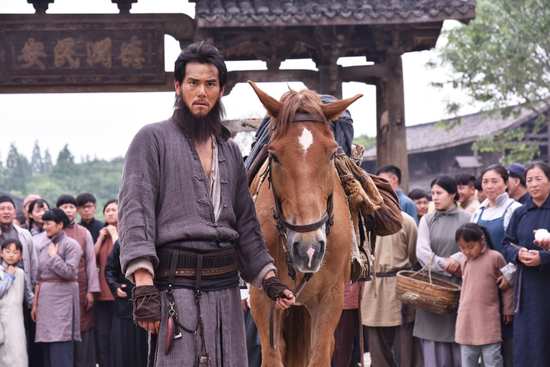 Then someone invented Blu-ray, around about the same time that Hong Kong, mainland Chinese, Korean and other Asian cinema really reached new heights in terms of stories, production values, and budgets. There were a whole lot of new movies coming out just ripe for HD presentation, and so Cine Asia was born, and as well as curating the existing HKL back catalogue, making sure those classic Jackie Chan movies stayed in print, they brought us the best of the new Asian cinema, movies like The Admiral, War of the Arrows, Shaolin, the first two Ip Man movies, Young Bruce Lee, and more. Alas, Cine Asia got caught up in the last gasp of the high street DVD retailer, and went into administration in 2012. 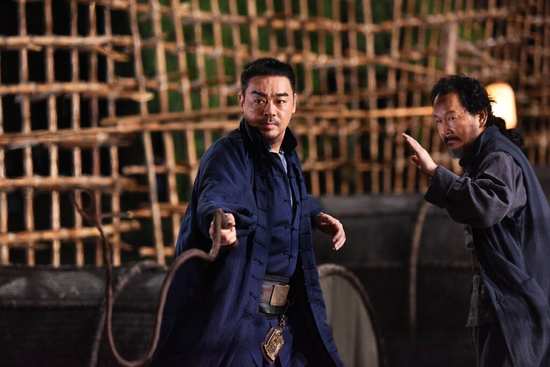 You may not have noticed, as in 2014, they were bought out by Trinity Films, who have been curating the Cine Asia back catalogue ever since, keeping these films on e-tailer shelves. Labels may be transient, but there’s always a desire for some kung-fu action in the UK home cinema scene, as evidenced by the 2016 release of Ip Man 3 by Kaleidoscope, and Dragon Inn by Eureka Entertainment. The latter will be releasing Drunken Master on Blu-ray in 2017 as well. The time seems ripe for Cine Asia to re-enter the fray, and to kick off 2017 in style, they’re bringing us the stunning 2016 wuxia action movie, Call of Heroes. It might just be the perfect movie to stamp their return. 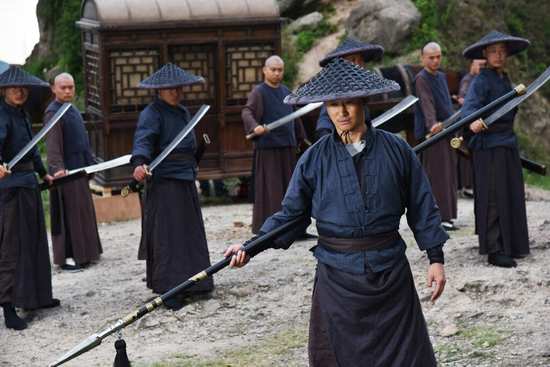 It’s 1914 and China is divided, with warlords battling for control. The worst of them would be Cao Ying, but his reputation for cruelty is dwarfed by that of his son, Cao Shaolung, a psychopath who gets off on random acts of murder and massacre. That’s witnessed firsthand by teacher Bai Ling, who barely manages to escape with a handful of children from the slaughter of her school. They and a group of other refugees manage to make it to the city of Pucheng. But Pucheng has problems of its own. The local army has left for the front lines, leaving the city in the hands of its guardians, the local police force under Yang Kenan. Then a stranger walks into town, enters an inn, and kills three innocent people. He’s arrested, tried, and judged guilty, sentenced to death. Which is when it is learned that the man in the jail cell is Cao Shaolung, and his father’s army shows up with an ultimatum. Release him within 24 hours, or the city will be razed, its inhabitants slaughtered. It seems a simple choice between peace and justice, but Yang knows that there can be no peace without justice. 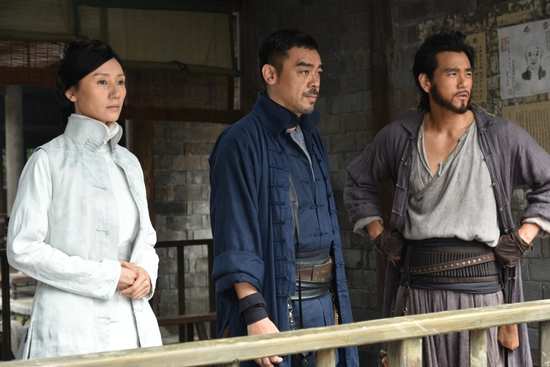 Call of Heroes gets a 2.39:1 widescreen 1080p transfer on this disc. It’s a digitally shot film, clear, sharp and with strong colours, rich with detail in brighter scenes. In darker scenes though contrast takes a knock, and some ghosting can even be apparent. It’s a shame as this is a film with great production values, the filmmakers built the city of Pucheng from the ground up to shoot in, and there is truly an epic feel to the thing. The period details are lush and pop off the screen, while the film has a colour timing that reflects its sense of history.

The images in this review were kindly supplied by Cine Asia. 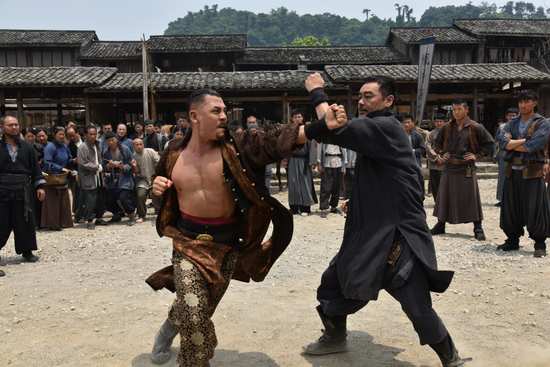 In the end credits, you can see the whopping great Dolby Atmos logo staring at you. You won’t have heard it though, as Call of Heroes merely offers you an uncompressed Cantonese LPCM Stereo track at 2.3Mb per second, or a mere Dolby Digital 5.1 Surround track at 640kb per second. You might think that in this case the stereo would be preferable, but the action demands a surround presence, and the DD 5.1 audio really does immerse the viewer right into the middle of the mayhem. It’s just a shame that it’s not a lossless track. Incidentally, this film was shot traditionally, dubbed in post, so don’t expect lip sync. The English subtitles are timed accurately, although they needed another read through to correct typos. As for the music, it leans more West than East. It’s worth noting that the US release from Well Go USA has lossless surround audio in Cantonese and Mandarin. 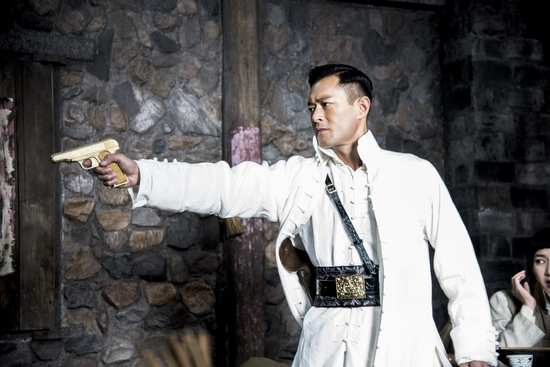 There are a lot of extras on this disc... which amount to very little.

You get the International Trailer (1:41), four Character Trailers (3 mins approx), and a 1:52 slideshow gallery featuring poster art, all in 1080p HD.

Then there are the making of featurettes as listed below, all in 1080i 50Hz format. 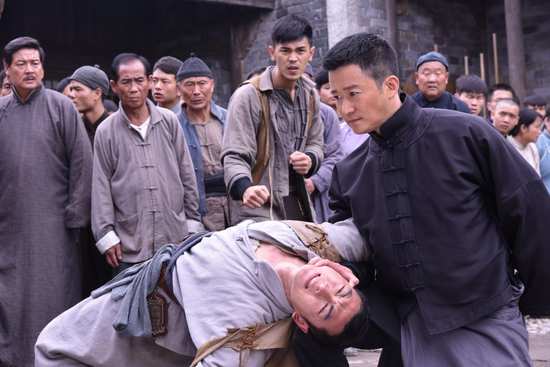 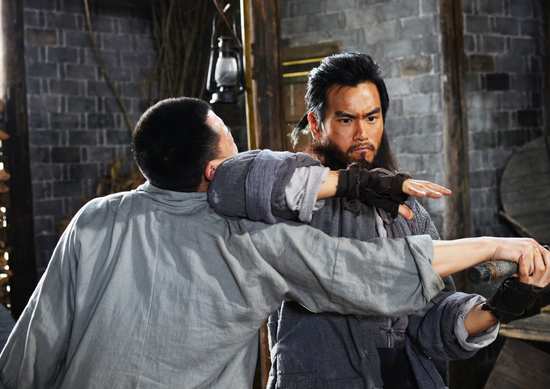 As you can see, these are brief, soundbite featurettes that don’t last long enough to provide any true insight into the film. What they also lack is a Play All feature, which could strip the fifteen seconds of credits from each segment, and let you get through the lot in less than half an hour without wearing out your remote control.

The disc comes in a standard Blu-ray Amaray, with some nice artwork on the inner sleeve as well as outside.

I was looking forward to some pure kung-fu action, the kind that has been missing from my life for the last couple of years while Cine Asia lay dormant. I certainly got that with Call of Heroes, but I got a Western as well. This is a very good thing, as kung fu and westerns go really well together, the martial artist and the gunslinger interchangeable as figures of legend. Call of Heroes certainly wears its inspiration on its sleeve, with a music soundtrack that has more than a touch of the Spaghetti Western about it. The first heroic character that we meet has a suitably ‘man with no name’ entrance, sound asleep in a restaurant when a bunch of robbers try to steal from it. The boss of the bandits makes the mistake of rousing Ma Feng from his slumber before he and his cohorts are soundly beaten. That’s the moment in the film that tells you that you can sit comfortably, that another classic kung-fu flick is about to unfold. 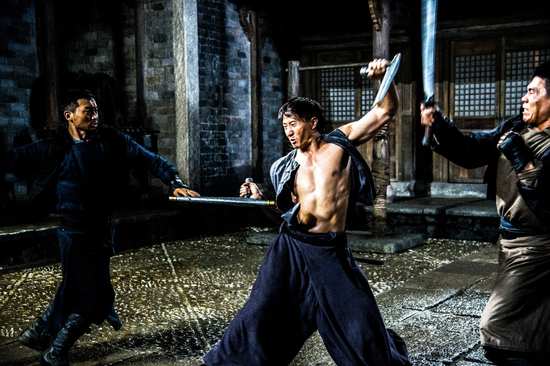 Ma Feng also has the strange quirk of putting a blindfold on, and letting his horse choose where to travel next, which is how he winds up in the middle of Pucheng, falling from his horse while snoring, right into where the action is going to be. That action owes a lot to movies like Rio Bravo, where a local small town sheriff bites off a little too much by arresting a big shot villain, said villain’s gang threatening to raise mayhem if he isn’t released. Call of Heroes is certainly not as claustrophobic as some of those Westerns were, but the conflict between expediency and justice lies at the heart of this film just the same. The villagers want to be shot of Cao Shaolung for the sake of a peaceful life, but the audience and the heroes know full well that releasing him is no solution at all. 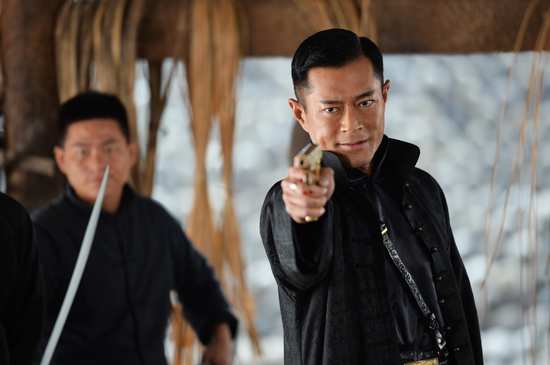 There’s conflict from within for Yang Kenan, the sheriff of this particular town, as he faces increasing calls from the villagers, and eventually his own deputies to release Shaolung, and from without from Cao Ying’s army demanding their general’s son back, and who are not above attempting a jailbreak in the middle of the night. There’s added poignancy, as the commander of Cao Ying’s army, and Ma Feng were friends in another life, and now fate has put them on opposing sides. The event that sundered their friendship as shown in flashback was a conflict between loyalty and honour, and they face the same argument once more. That’s because the commander is now loyal to Cao Shaolung, and he’s a totally depraved psychopathic mass murder, who kills men, women, and children with impunity. Once his identity is known, he’s manipulating the townsfolk with a sadistic glee from within his jail cell. 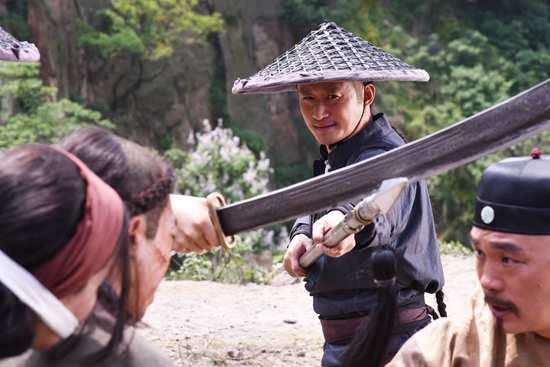 The scene is set for an epic battle of justice versus chaos, right versus wrong, good versus evil, and this film surely delivers with some memorable and visually inventive action set pieces. The cast is a strong mix of actors and action stars, and Benny Chan gets some memorable performances from the cast, while Sammo Hung’s action direction and choreography really shines on screen. This is another kung-fu flick which will provide you with a list of moments to recall. My favourite has to be the call-back to the Sammo Hung movie, The Odd Couple, another sword versus spear fight, this time on a mountain of pottery. 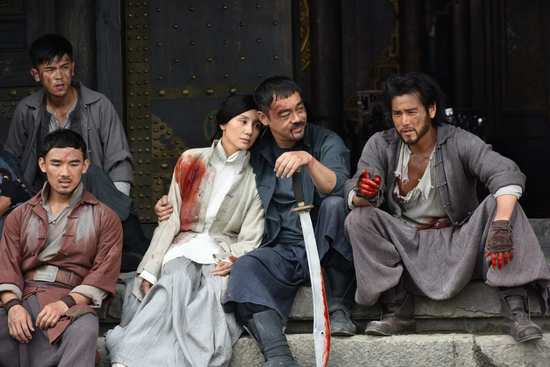 Call of Heroes is a perfectly paced, brilliantly shot action movie, with great characters, and some entertaining fight sequences. It’s not exactly groundbreaking though, it doesn’t deliver anything particularly new, and it treads a path that countless movies have trodden in the past. That’s okay, as sometimes what you want and need from a new movie is something that’s actually familiar and nostalgic. In that respect, Call of Heroes is the perfect movie with which Cine Asia can mark their return to UK releasing.