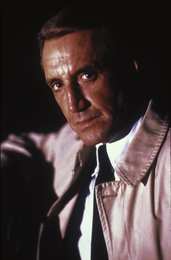 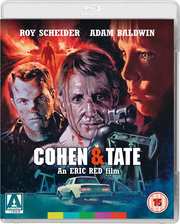 They were hired killers going up against the deadliest force of all. Each other.
Certificate: 15
Running Time: 86 mins
Retail Price: £19.99
Release Date: 2016
Content Type: Movie

Synopsis:
When a pair of mismatched hitmen — the grizzled, experienced Cohen (Roy Scheider, Jaws, The French Connection) and the impetuous, psychopathic Tate (Adam Baldwin, Full Metal Jacket, Firefly) — are tasked with snatching a young boy living under witness protection and transporting him to their boss in Houston, it seems like a simple enough job. But the pair quickly find that they’ve got more than they bargained for, with both the boy’s unexpected resilience and their own incompatible personalities threatening to derail the entire mission. And, as the night wears on, their cross-state journey truly becomes the road trip from hell...

With Cohen & Tate, writer/director Eric Red (Body Parts, Bad Moon) constructs a truly nail-biting thriller recalling the atmosphere and motif of people driven to desperate lengths in order to survive also present in his script for the celebrated road horror classic The Hitcher. So buckle up for the road trip from hell as Cohen & Tate now shines like never before in this feature-packed, director-approved edition.