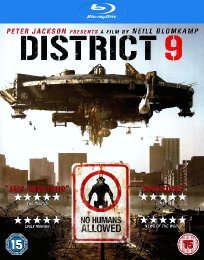 A while ago I was walking through the city and I saw a sign on a telephone box saying 'Humans only' I was a little puzzled, but guessed this was either some mad way to stop people taking dogs into phone boxes or had to be tied into a new game or film. It was of course the build up to District 9 one of the oddest and most overhyped films I have ever watched.

District 9 tells the story of an alternate time where aliens have landed twenty years before over South Africa. Their ship is non-functioning and so the aliens come down to Earth and are placed in camps segregated from the human population. The aliens have their own language and advanced technology though they choose to live in the poor shanty town provided for them rather than use this technology to take over the world and/or just get a fair deal for themselves. The film shows how the South African government were moving the creatures to a new facility (more or less a concentration camp) and this was being organised by Wikus van de Merwe (Sharlto Copley) who during his duties to give everyone eviction orders suffers a mishap that leaves him injured, but even more of an asset to the government than they thought. It is then up to Wikus to help the aliens, in particular a father and son who are one of the many aliens he is trying to evict. The film deals with problems of alienation, xenophobia, persecution through a mixture of 'documentary interviews' and 'found footage'.

First up, I have to be brutally honest. I hated this film. Hated every last minute of it. Sure, we can wax on (as Blomkamp in the commentary does) for hours about how it is a clever allegory about the apartheid and to some extent it is. However, unlike George Orwell's Animal Farm that took the Communist Revolution and turned that into an allegory of farm animals seizing control, this film seems to be missing a few points. The creators have also decided to rip off 'fact' documentaries such as Grizzly Man and just attach these rather bizarre 'documentary' and interview footage onto a run of the mill sci-fi action film. If Director Blomkamp had decided to create this as purely a 'found footage' film, which is what it seems to be for the first fifteen minutes, it could have worked, but instead the jump from found footage to documentary interviews to archive footage to filmed footage is simply awful. It doesn't suck me into the story and in fact makes me wonder exactly what everyone is raving about. Once you apply any form of logic to the film you realise just how bad it is. It is established that the aliens have this amazing technology, ray guns and head-blowing missile launching equipment and yet they live their lives as essentially lower than slaves, selling this equipment to the Nigerian gangs (that can only be used by the aliens) for cat food! Why would they do this? Surely they would blow up four or five of the gang and then telling them to give me all the cat food or we'll carry on blowing up heads! Surely?

It is odd, because if I watch the film in sections I actually enjoy it. If I simply watch the first section which explains why the aliens are here and how the people adapted to them, it is good film. If I watch the last twenty minutes in which the film seems to turn into a level of Halo 3 again it is fine, but the mixture of all this together gives me the impression that the creators were throwing every idea they had, without realising that they were adding too many cooks and the broth was getting very spoilt!

Once I finished watching this film, I dreaded watching it again with a commentary or watching deleted scenes or featurettes. I just wanted to put the disk down and never pick it up again. However, on saying that, the extras are pretty good if you would like to know how they did everything. The commentary is good, though I wish Blomkamp had not done it alone or at least enlisted the co-writer Terri Tatchell to bat some of the ideas around with him as listening to him talk on his own seemed a little desperate at times (Having been recorded before the release in the cinema, you get the feeling that he didn't want to say too much, just in case the film flopped). As I say, the documentaries cover every aspect of the film's creation, mostly involving the concept and design and also a bizarre one regarding the improvisation aspects for the film. Finally the extras wrapped up with an innovative interactive map of the District 9 universe and a number of deleted scenes are fairly interesting for those who enjoyed the film, but most of them you can understand why they were cut. The only sad thing, was that the original short the film is based on 'Alive in Joburg' is not included; considering it is only six minutes in length it seems a little odd not to include the genesis of the whole project unless copyright was an issue.

District 9 is possibly one of the most overhyped films I have ever seen. I know many people loved the film and to be honest I should be one of them, but I simply couldn't get around the horrible way the story is told. If they had stuck with a documentary style it could have been amazing, a straight forward sci-fi action it may have had its moments, but the mixture of two makes it a mess and a district that I won't be returning to any time soon.