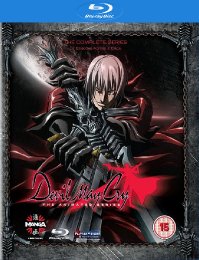 Devil May Cry: The Complete Series

Videogame adaptations are generally rubbish. There are some exceptions that rise to mediocre level, but if you see 'Based on the best-selling game...' on the cover then you know it's something to avoid. I therefore went into Devil May Cry with mixed expectations, hoping an anime series could buck the trend and be as interesting and involving as the game itself.

Dante is a half-demon who has chosen to defend the human race from other demons using his guns Ebony & Ivory and sword Rebellion. Running his detective agency, Devil May Cry, Dante accepts missions from his agent, Morrison, and is constantly in debt because of his gambling problems. Dante isn't your normal hard-boiled detective, as he eats pizza for every meal and has a weakness for strawberry sundaes. However there is a femme fatale, Lady, Dante's ex, who can force him to take missions as he owes her a great deal of money.

The series comprises of twelve missions, each one pretty similar to the next, as Dante investigate a demon and kills it, but there is a slight narrative arc as the first mission brought a young orphan girl, Patty, into his life and she spends most of her time hanging around the agency, cleaning and watching TV. Though she lives in an orphanage, Patty is convinced that her mother is still alive and sees her everywhere. Another storyline involves Dante being harassed by a demon called Sid, who is not worth killing, but he does have a nefarious plan of which Dante is unaware. 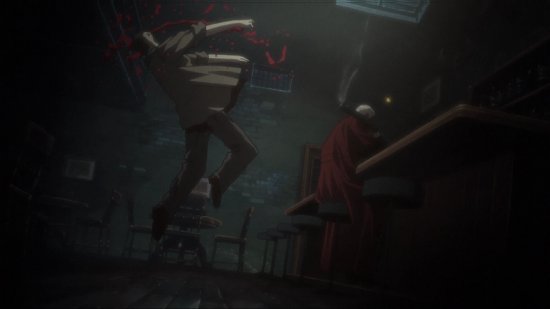 Mission 01: Devil May Cry
Dante, a half-devil, half-human mercenary specialising in devil hunting, is hired as the bodyguard of Patty, a young orphaned girl who is the heir to a large fortune. He protects her from the numerous demons set to kill her, but feels something amiss in this job.

Mission 02: Highway Star
Dante reluctantly accepts a mission from his old acquaintance, Lady, to stop a demonically possessed motorcycle named Red Eye that haunts the motorway. At the same time, a young, brash motorcyclist hopes to outrace the Red Eye, so as to avenge his brother.

Mission 03: Not Love
The daughter of the mayor begins seeing a mysterious man behind her father's back. Under suspicion that the man is a devil in disguise, Dante is sent to investigate. Along the way, the man questions whether a human and a devil can ever be together, forcing Dante to recall the relationship between his human mother, Eva, and his father, the legendary dark knight, Sparda.

Mission 04: Rolling Thunder
A strange woman with lightning-based abilities is seen lurking around town. Lady is asked to investigate, believing it's a demon in disguise. However, the fact that this woman dual-wields handguns does not surprise Dante at all. 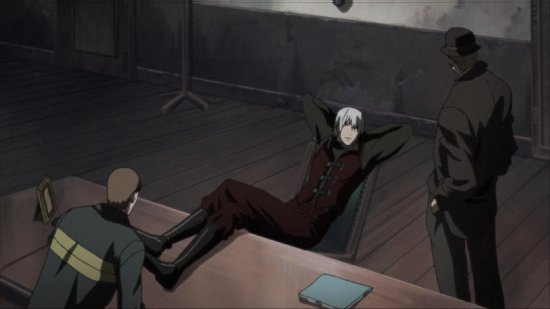 Mission 05: In Private
Dante finds himself followed by a customer from a local diner, who is trying to find out the devil hunter's secrets in order to impress a local waitress. After witnessing Dante slay multiple devils, the man manages to gain the waitress' affection.

Mission 06: Rock Queen
Dante is hired to protect a group of treasure hunters from a female devil that possessed the body of a former rock star.

Mission 07: Wishes Come True
A man receives a visit from a demonic mask which claims to fulfil any wish he desires. After inadvertently wishing for his friend's death, the man ends up in a prison deemed impossible to escape. Dante is hired by a guest from the past to get him out of the prison. Dante manages to expose the prison guards as devils and later defeats the wish-making demon as well.

Mission 08: Once Upon A Time
A man named Ernest insists that Dante is his childhood friend, Tony, and that he and his mother used to live in his small town, before being banished by the townspeople, after a devil attacked, twenty years ago. Dante hesitantly plays along, but continues to deny the claim. 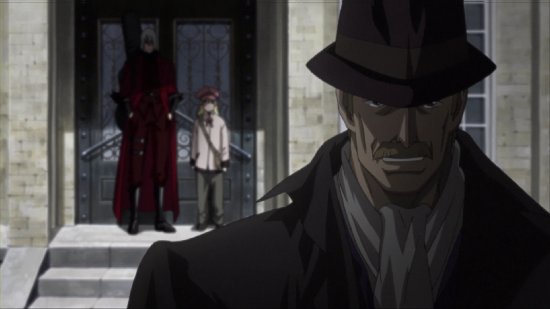 Mission 09: Death Poker
A woman hires Dante to save her husband from gambling. Not long after, Dante joins a game of poker and soon hears the story of King, a gambler who is said to be killing anyone who loses against him. The gamblers assembled realise that King is among them, and as they drop dead one by one, Dante exposes King with the aid of Lady and defeats it.

Mission 10: The Last Promise
Dante is attacked by Baal, a former servant of Sparda who seeks the chance to battle the Legendary Dark Knight. In the meantime, Baal's brother Modeus tries to find a way to prevent the fight between Dante and Baal. Dante defeats Baal and subsequently kills his enraged brother.

Mission 11: Showtime!
Dante encounters Patty's mother, the descendant of a human sorcerer, who once sealed away the power of an ancient devil lord, Abigail, but the mischievous demon Sid, who has been harassing the hunter for a while, finally unveils his plan that could unbalance the human world and destroy it. 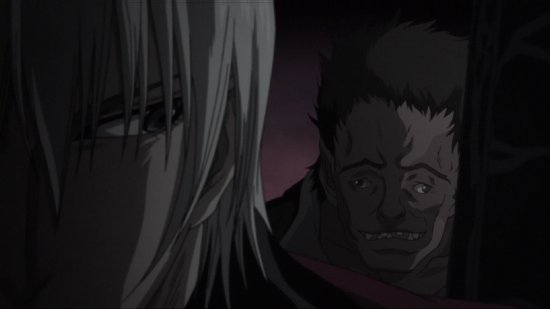 This is a show that could have been terribly formulaic and boring, with each episode following the exact same template, but as they mix up the themes with some romance, comedy and horror, it holds your interest. Dante is also an interesting character, especially as the show goes on and it explores his heritage. His interactions with Morrison, Patty, Lady and Trish allow for fresh material and while it's not the most accomplished anime around, it is an enjoyable watch that you can do in one go.

Extra Features
Not a great deal of supplementary material here, but just about par for the course for an anime release. There are the clean (textless) credits and an interview with Toshiyuki Morikawa, who voices Dante, which is worth a look.  There are also seven cut scenes and preview trailers for this and the fourth instalment (released last year) in the game series. 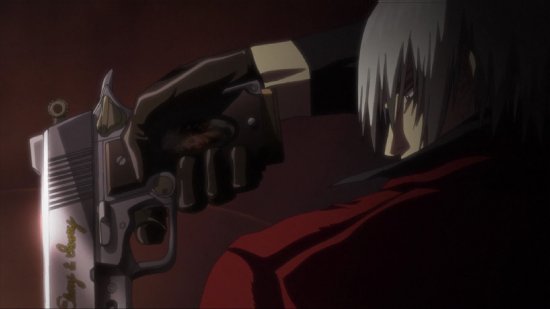 The Picture
Apparently, Madhouse has something of a reputation for producing fantastic looking animes and judging by this, it's one that's well deserved. The characters are beautifully designed, the demon transformations fluid and the action sequences extremely frenetic.

The HD picture is very clean with a handsome transfer - the colours are bright and contrast well with the deep black levels.

The Sound
You get the choice of Dolby TrueHD 5.1 English or Japanese and both are very good with suitable voices and I'd usually go straight for the Japanese but, as this is an American setting with English signs and newspapers, I watched most of it with the English track and was very impressed. The surrounds are used very well, directing the conversation so that when someone speaks from the back of the room, the sound comes from that direction.

The action sequences are extremely loud and bombastic, so your whole speaker system springs to life when a fight breaks out. The commercial markers are left in and some are accompanied by either a gunshot or the sound of swords clashing, which always managed to catch me off-guard and elicit a slight jump! 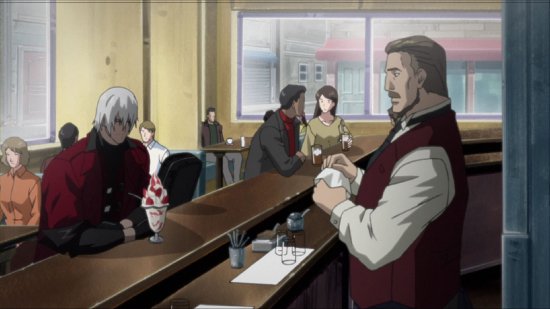 Final Thoughts
This may be the best way to adapt a videogame, take the mission element and turn it into one episode within the wider narrative. Devil May Cry wouldn't have worked in a feature-length format as you would just get bored and find the characters underdeveloped, so a series of 20+ minute episodes suits it perfectly.

I'm no authority on anime, for that you'd have to read Jitendar's DVD review, but I really enjoyed this and can see myself going back to it at some point. With the added AV quality that Blu-ray offers, this set is worth a place on any anime fan's shelf.