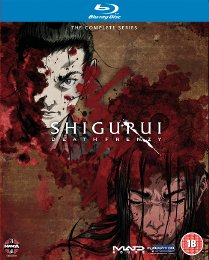 Set at the end of the Warring States period in Japan, Shigurui: Death Frenzy at the Iwamoto dojo where the patriarch is the immensely skilled but demented Kogan Iwamoto.  Having honed his skills in the civil war, he perfected a style of swordplay that bears his name and is almost unparalleled in its success.

You get a sense of the lyrical and gruesome nature of the show in the first episode when a man approaches the Lord and explains to him the lunacy of having skilled warriors fight with traditional weapons instead of bokken (wooden swords); to illustrate his point he undoes his kimono and plunges his hand into the bandaging around his stomach causing his intestines to spill out all over the floor.

The narrative is a flashback from an arranged match between two rivals, Seigen Irako and Gennosuke Fujiki, one now blind and crippled and the other with only one arm.  Flashing back seven years to when Irako arrived at the dojo to challenge Kogan for the secrets of Kogan's sword fighting and Mei, Kogan's daughter.  Fujiki was the assumed heir but when Irako defeats him in a match, the status quo is broken and Fujiki harbours a grudge when Irako is invited into the dojo to stay and train. 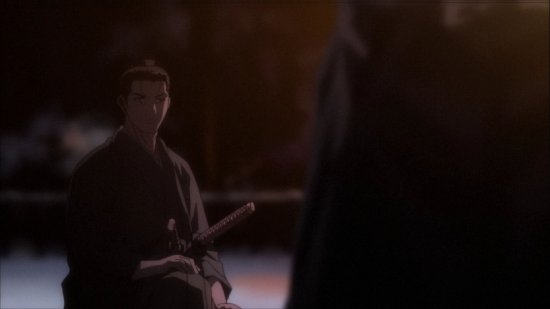 When a killer of undeniable skill begins beheading members of the dojo, Kogan orders that the two catch the murderer and the man who brings back his head will have the honour of having his daughter.  Several characters are introduced as obstacles to each man's ambition, whether it's a love interest or another rival, plus the council of advisors who keep the dojo running when Kogan is in his frequent coma-like state.  This dementia is slightly selective and unpredictable, with Kogan appearing lucid and violent at any moment, displaying the skills that show why his students hold him in such high regard.  There is an undertone of dark humour to all this with the patriarch drooling and generally appearing as a waking corpse but still a deadly samurai and a man who has not lost his sex drive.

Shigurui: Death Frenzy has the feel of an Akira Kurosawa film with plenty of meditative shots and selective dialogue where words are chosen carefully for maximum effect.  During the series director Hiroshi Hamazaki and screenwriter Seishi Minakami who adapted it from a manga series (which itself was an adaptation of a novel by Norio Nanjo) take their time over events and this is not an anime that you can watch over several days whilst multitasking, it is best watched in one go (if possible) as it is almost a long feature film. 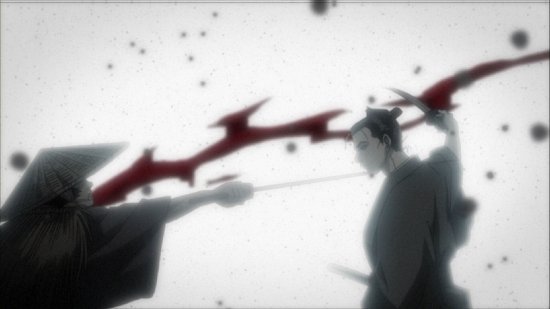 The press release boasts gory violence, sex and dark, edgy anime and it certainly delivers on all fronts with beautiful animation and themes that are obviously aimed at an adult audience which is supported by the 18 certificate.  I wondered why it was that the ending felt so flat, as if I'd been on a rollercoaster with a few ups and downs, twists and turns along one incline when the anticipated thrilling finale never comes.  Perhaps this is the point and that there are no blood-soaked, last man standing swordfights in this world, with things sorted quickly and quietly without any need for the sort of battle that solves tensions as in The Seven Samurai.  This anti-climax left me feeling a little underwhelmed with lots of teasing leading to very little.  However this doesn't detract from the quality of the material - the show is beautifully written, animated and directed and is certainly a mature and accomplished  piece - it's just that I expected more from the final episode with everything being resolved satisfactorily only to find that it wasn't.

Extra Features
Aside from the usual anime staples of textless openings and closings, there are character biographies a settings gallery and commentaries on two episodes with members of the English cast and crew.  These are a decent listen, though I spent most of the time with the Japanese soundtrack on, only sampling the English dub, but found the found the speakers to be intelligent and eloquent.

There are two play modes: the usual play or 'marathon play' which cuts out the credits and plays all the episodes on the disc seamlessly, this is definitely the way to watch Shigurui as it removes any distractions and allows you concentrate on the material.  In all, the marathon play option is 33 minutes shorter across the two discs. 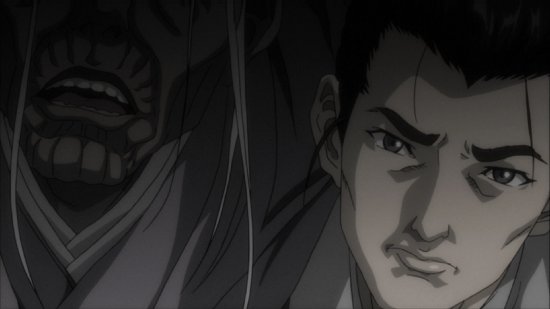 The Picture
Shigurui is probably the most beautifully animated and presented show I've seen.  This may not be saying much due to my lack of exposure to anime series but I can't believe that there is one out there that looks as good as this.  With the lack of dialogue, the show is very much dependant on the visuals to convey the characters and mood and this, combined with the music, does so in spectacular fashion.  The consistency of the picture quality is slightly puzzling as it jumps from beautifully clear to noisy with no real explanation although the more abstract scenes have the most grain, perhaps to illustrate imperfections in memory.

The aesthetic is stark, with almost monochrome settings and characters but bright red blood.  When there is an explosion of violence, the blood comes as quite a shock as the muted palette means that the flashes of colour have more of an impact.  The violence is extremely believable and amazingly well animated, with a real visceral sense of style.

The Sound
Sadly the Blu-ray has only upgraded the English dub from the Dolby Digital 5.1 on the DVD to a Dolby TrueHD 5.1 soundtrack here.  The Japanese Dolby Digital 2.0 stereo stays as is which is a real shame as I prefer to listen to films and shows in their native tongue.  The voice acting in both languages is superb with no-one sounding out of place and narration with suitable gravitas.  The surround option is definitely the way to go as the music and combat scenes have much more resonance with the multiple channels but, if you are a purist, the stereo track is perfectly adequate and the subtitles (not dubtitles) are clear and well written.

One of the main features of Shigurui is the mournful and deeply evocative score by Kiyoshi Yoshida who seems to be a fan of Angelo Badalamenti as there are musical cues straight out of his work with David Lynch.  The music complements the visuals and fills in the gaps left by the sparse dialogue to perfectly convey atmosphere and tone. 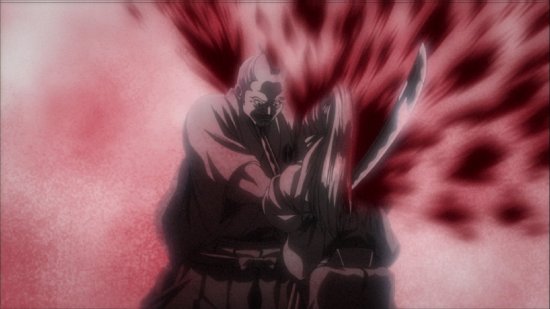 Final Thoughts
Shigurui is a tremendously well thought out show with intriguing character arcs and a fascinating narrative that unfortunately doesn't resolve itself in a satisfactory fashion.  It's a show that left me crying out for more, having failed to sate my appetite which was built up beautifully over ten of the twelve episodes.  Saying that, this is a captivating show which is definitely worth a watch for any anime fan who, if they have the required equipment, should go for the Blu-ray as the AV quality can be stunning.