Article
What You See Is What You Get: The New Version of MAGIX Photo app Camera MX for Android smartphones

MAGIX AG has released its addition to the world of Android camera apps, Camera MX. It adds new speed and functionality to the market with real-time filters, but also brings an understanding of photo editing that only an established market leading can perfect. Quickly editing captured photos and publishing them over multiple communication channels has been streamlined and neatly package for the mobile user. MAGIX Camera MX is now available for free on the Android Market from version 2.2. 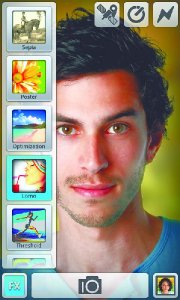 Though producers have been flooding iTunes with live filter apps, the Android market has remained dry. This free app, MAGIX MX, has been designed and priced to fill this void.

MAGIX MX includes 16 conventiently-accessible, always-ready filters that allow for creative decisions as quick as the mobile user. This list includes popular effects like Lomo, Sepia, Pop Art, negative, Orton, and Kaleidoscope. Then after taking the photo, users can calibrate their images more precisely by adjusting saturation, contrast and white balance, to name but a few.

The finished photos can also be assembled into more personalized formats. In the provided media manager, they can be viewed as slideshows customized with optional 3D transitions, the Ken Burns effect, and a choice between six optional soundtracks. If you like the end results, you can post them to Facebook and Twitter with the click of a button. Additionally, you can upload them to the MAGIX Online Album, where the pictures can be presented to the whole world from your personal domain.