DVD
The Real Band of Brothers

Film
Laddie: The Man Behind The Movies
Related Articles

Stocking filler Robbie Savage: Football Howlers is out on DVD this November 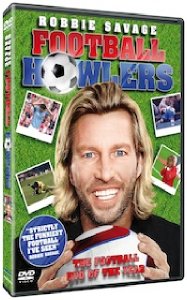 Join football's voice of the fans and star TV pundit, Robbie Savage, for THE football DVD of the year!

Footballer, award-winning radio presenter and star of BBC's Strictly Come Dancing, Robbie Savage, presents 'Robbie Savage: Football Howlers', the hilarious new DVD featuring the craziest cock-ups, goofiest gaffes and most memorable moments of the beautiful - and occasionally ridiculous - game. Presented in Robbie's trademark no-nonsense style, this year's hottest Christmas DVD stocking-filler for footie fans has got it all: from breath-taking blunders and nightmare misses to cack-handed goalkeepers and players going bonkers. Never short of an opinion, Robbie adds to the entertainment as he comes to terms with how the pros sometimes get it so wrong! Full of action from today's star players and top teams, 'Robbie Savage: Football Howlers' is THE football DVD of the year!

Robbie Savage says: "It's great to have my own DVD. I mean I've won awards as a player and a presenter, I've played for Wales, captained Derby. But it isn't until you get your own football bloopers DVD that you feel like you've really made it!"

Robbie Savage is the man of the moment; footballer, TV personality and award-winning radio presenter, with a loyal fan base that includes nearly 500,000 Twitter followers. Love him or hate him Robbie is football's 'Mr Marmite'. The tenacious midfielder hung up his boots at the end of the 2010/11 season after making over 600 appearances for Derby County, Blackburn Rovers, Birmingham City, Leicester City, Crewe Alexandra and Brighton and Hove Albion and is currently in the top 50 most capped Premier League players of all time. Highly regarded as one of football's most colourful characters, Robbie is famous for his no-nonsense approach on the field and is the current record holder of most Premier League yellow cards, having picked up 89 in during his time playing in the league.

Off the pitch, Robbie has quickly established himself as one of Britain's favourite media pundits and recently won the Sony DAB Rising Star Award for his work on BBC Radio 5 Live's 6-0-6 programme. More recently Robbie joined the star-studded line-up of BBC's Strictly Come Dancing for what promises to be the most entertaining series yet. Robbie Savage hit the jackpot when he was partnered up with professional dancer and 2009 champion Ola Jordan and the pair has already proved to be a hit with both the judges and the show's audience. Born in Wrexham on the 18th of October 1974, Robbie joined Manchester United as a trainee. A devoted family man, Robbie has two sons with wife Sarah. Robbie regularly makes appearances as a football pundit on both TV and radio for the BBC and ESPN.