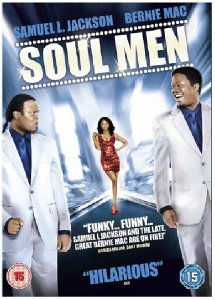 
Out of sync. Never out of style

When R&B legend Marcus Hooks dies suddenly, VH-1 invites his original back up duo, Floyd Henderson (Bernie Mac) and Louis Hinds (Samuel L. Jackson), "The Real Deal," to appear at a memorial tribute at the Apollo Theatre. Floyd, who's bored in retirement, wants this more than anything; Louis, a philosophical ex-con, does not. Plus, there's bad blood between them (Louis's wife Odetta left him to marry Floyd - then left Floyd). Floyd begs, Louis consents but won't fly, so they leave L.A. in Floyd's flashy Cadillac with five days to get to New York. On the road, they must get back their vocal chops, renew their friendship, and sort out the past. With Floyd's bad hip and Louis's bad kidneys, will they even make it?

Deleted scenes
Behind The Scenes Boogie Ain't Nuttin' (But Gettin' Down)
Director Malcora Lee, The Soul Men: Bernie Mac & Samuel L. Jackson, A tribute to Isaac Hayes
The Cast of Soul Men, A Tribute to Bernie Mac, Bernie Mac At the Apollo