Article
Gumball 3000 out on DVD and iTunes this April

I'm Gonna Explode out on DVD in April 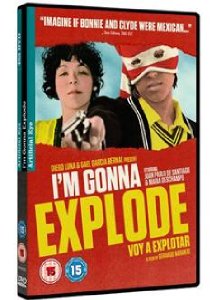 RELEASED ON DVD 12TH APRIL 2010
A film by Gerardo Naranjo

WRITTEN AND DIRECTED BY: GERARDO NARANJO

"INTENSE, VISCERAL AND SEXY"
ROSAMUND WITCHER, DAZED AND CONFUSED - FILM OF THE MONTH

"IMAGINE IF BONNIE & CLYDE WERE MEXICAN"
DAVE CALHOUN, TIME OUT

Roman and Maru, two troubled teenagers, attempt an impossible rebellion against the adult world. Maru, a 15-year-old loner, meets Roman, the reckless son of a corrupt right wing politician. United by their desire to fight the inertia that they feel surrounding them, the two embark on a revolt against everything and everyone when they decide to run away to a place where they are free of other peoples expectations. This leads them to an accidental new intimacy and the discovery of their sexuality, a bond that both unites and confuses them. Despite the risk of getting caught by the police and their parents, the young fugitives jeopardize the security of their hiding place and seek to expand the limits of their paradise. But this will mean a return to reality, where wounds are genuine and actions have consequences.