Blu-ray
Sound of Music, The

Article
3D Or Not 3D, That Is The Question
Tags For This Item
Books, E-Reader, Sony, SprocketHole
Recently Added Items

Who Said Print Was Dead?? 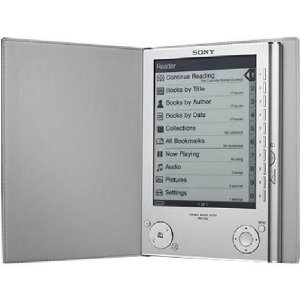 Say hello to my leedle friend.

This is currently my favourite toy. The Sony E-Reader PRS-505. About the same size and weight as an A5 Diary, it is for an old sci-fi whore like me, the implementation of The Hitchhiker's Guide To The Galaxy. The only thing missing from the beige, faux-leather outer cover are the words "Don't Panic" in large, friendly letters, and that is the work of five minutes with a pack of self-adhesive letters.

Electronic Book Readers are a growing breed of devices that promise to change the way we read. There are, so far, a handful of first or second generation devices on the market. The most advanced of the breed, Amazon's Kindle, in any of its incarnations is typically unavailable outside the US. The main reason for this is the device's Wi-Fi operability - the device downloads content directly from the web via Whispernet. A similar deal in the UK would have to be brokered with somebody like 3 Mobile, and a UK-specific model of the reader would have to be manufactured so there's probably more likelihood of Miss Piggy breaking the sound barrier. At around $350, (£300ish), the Kindle is also the most pricey of the electronic book readers.

The closest competitors come in around the £200 mark, which makes the technology still fairly pricey but within the scope of other similar gadgetry like PDAs, GPS and the like. Of the competitors, the most widely available in the UK is the Sony E-Reader PRS-505. All the usual suspects carry stocks, with Play.com currently offering the best price of £179.99 - although they no longer offer the external PSU as a freebie which they were doing up to a week or so ago. The PSU will now set you back around £30, but it does mean you can charge the reader in two hours rather than four and you can use it while charging which you can't if you charge via the USB cable.

As regards looks, the Sony E-Reader comes with solid aluminium bodywork which makes the device feel really robust. The controls are pretty simple - a spring-loaded slide on/off switch on the top (similar to an MP3 player, you cock it like a gun rather than switching it on or off). Ten menu buttons down the right hand side of the display, two sets of page-turn buttons forwards and backwards on the front of the reader, a zoom button for changing font sizes and a bookmark button. There's also a straightforward up-down-left-right-and-enter control button on the front of the reader. On the bottom edge of the device is the mini USB connector, the PSU socket and a socket and rocker volume control for a pair of earphones as the E-Reader also plays MP3s. You can read and listen to music at the same time.

The basic model E-Reader in plain silver looks terrific, but there is a designer scarlet version available from John Lewis for about £225.

The BeBook is the closest competitor to the Sony E-Reader, although reports of the build quality are disappointing in comparison. The BeBook has a black plastic body compared to the Sony's metal. At £230, it's pricier than the Sony, but can handle a few more file formats. The device itself is a rebadge of the Chinese Hanlin E-Book Reader.

There are a couple of other devices, but they are harder to get hold of, and tend to be more expensive as well.

All of them have the air of Captain Picard's PADD - a smallish (six-inch) display using the new E-Ink technology. The E-Ink display has the look and feel of one of those "magic pad" drawing toys - a sticky translucent sheet on a slightly oily black backing - when you drew on the film, it stuck where you had pressed to the black backing. When you wanted to start again, you peeled the film off the backing again and the image "magically" vanished. You don't of course peel off the E-Ink display, but it has the same light-grey look. Contrast levels with E-Ink have been one of the problems inherent in the technology, with a "paper-white" display still not achievable. Some early adopters have bemoaned the lack of a backlight on the display, but the inclusion of a backlight would negate the power-savings made by the E-Ink display. A colour display is also a while away.

Battery-life is the big eye-opener of the electronic book readers. Because E-Ink only requires power to redraw the display, the battery life is talked about in page-turns rather than hours. The Sony and the BeBook - its closest competitor - both have battery charges of around 7000 page-turns (or War and Peace five times cover to cover). In practice, the battery seldom seems to discharge fully, as it tops up to full capacity fairly rapidly while transferring content over the USB link.

I'd hate to get into an Egon-Spengler-type argument that "Print Is Dead", because it obviously isn't - the paperless office never happened (if anything the reverse happened), and if you're absolutely honest the E-Reader emulates the whole reading-off-paper paradigm rather than being some whiz-bang screen-graphic experience.

The great thing about the E-Reader is that you can put a ton (literally) of content on the thing, and depending on your reading tastes cheaply or completely free. According to Sony's own blurb, their E-Reader has a capacity of 160 eBooks. That's undoubtedly eBooks in Sony's proprietorial file formats LRF and LRX, because I've managed to pack 320 eBooks on to my E-Reader in a combination of ePUB and RTF formats, and I still have around 50Mb of the 210Mb capacity free. In anybody's money, 320 books would make anybody's book shelves creak.

And that's just the internal flash memory. On the top edge of the device, next to the on/off switch, are two memory card slots - an SD card slot which can take up to a 2Gb card, and a Sony Memory Stick Pro Duo slot rated up to 16Gb - which would roughly be 32,000 books based on my average file sizes.

The E-Reader hooks up to your computer using a USB 2.0 cable, which enables it to charge up fully in four hours, and which keeps the permanent Li-Ion battery topped up fully when you upload books to the device. Your computer sees the device as three removable drives - the internal memory, the SD card slot and the MS card slot.

When you get the E-Reader, it comes with Library software which enables you to load eBook files on to the device. It also interfaces with Sony's E-Book store in the US, but only if you live there. UK residents have to deal with Waterstone's. Also in the box is a CD of 100 Classic books (in LRF format) - everything from Aesop's Fables to the Works of William Shakespeare. The device itself comes preloaded with three or four books (a thriller and a couple of Mills and Boon romances and a few excerpts from other books) to get you started.

Sony has a deal with Waterstone's for buying content for the E-Reader, but the eBook prices are very close or identical to the price of the printed book which might put some people off.

You can, however, fill the E-Reader for free if you know where to look. There are a number of digital libraries on the web, offering copyright lapsed works and public domain works. If you fancy boning up on the classics, for instance, you can do that for free. For my money, the best free book resource on the web is Project Gutenberg - the original electronic library. Wiki it.

Like music and movies, there are also bootlegs of more modern, copyrighted works if you know where to look, but I'm not telling you.

You can also read PDFs on the E-Reader, but print sizes can look pretty weird, and the layout can go completely bananas. Heavily illustrated documents such as instruction books cannot be zoomed satisfactorily and subsequently are difficult to read. I'm inclined to convert PDFs to plain text whenever possible and then reformat them in RTF format.

What really gets my creative juices flowing is the prospect of using the device as a proofreader for my own writings. Suddenly I don't need to hunch over a computer screen to read my writings back, or print out reams of paper. I can simply drag and drop the file (in RTF format, which I can set Word to use as the default file format). As long as I size the text to 16 to 18pt, it appears on the E-Reader perfectly. You can, of course size the text smaller, but the smaller the text the harder it is to read. Given the battery life of the E-Reader and the ease of use, it's a closer experience to reading a book than reading text off a screen.

Shame about the poor PDF implimentation, that would really make it interesting for me. :( The iPhone is amazingly fast and usable when it comes to PDF, but the screen size is the limiting factor which makes reading that kind of content on it a bit tiresome.
posted by Robee J Shepherd on 28/5/2009 11:18
I'd be really interested if it handled electronic comic formats like cbr files (or cbz) and displayed them in a readable size. Does it do this Mark? (I happened upon a treasure trove of TV21 / TV Comics and can't stop reading them though the laptop is a bit cumbersome for this sort of thing!)
posted by Stuart McLean on 28/5/2009 20:18
9 / 10

ISTR you can use Calibre, a freeware library tool (Wiki it) to convert cbrs to a readable format.  Haven't tried it myself yet.

UPDATE:  Tried it out myself and the results look absolutely terrible.  The cbr file has to be converted to ePUB format, which takes a couple of minutes per file.  The results can be viewed landscape or portrait, but not zoomed which is a huge disappointment.  The images are rendered, of course, in greyscale rather than colour which makes them look very muddy, and lettering is almost indecypherable.  For viewing comics, the E-Reader is not the answer, but I'll bet a lot of problems will be addressed in later models with larger (A5 or A4) displays.

With PDF files (which I personally consider the work of Beelzebub), there are issues with DRM as well as navigation problems.  Even in a simple document with just text, there's no text flow like you get with other file formats - it's like working with a plain ASCII file with hard returns at the end of each line - the moment you change type sizes the lines go haywire.

As much as I'm a fan of the Sony E-Reader, I'm not blind to its shortcomings.  Changing type-sizes for legibility isn't very well handled, the filing system's atrocious and there are a dozen other niggles I could come up with.  As a first generation implementation of a concept, however, it's a winner and I can't wait to see the next generation of these devices, although I hope Sony skips trying to flog the PRS-700 with its touch screen in the UK and moves on to a new model that fixes all the odd little problems.

Either that or Amazon pulls out its corporate finger and gets the Kindle on sale here.

Incidentally a cbr file is just a rar file of jpgs - and cbz files are zip files of jpgs - news to me, but it means you can convert any set of images into a magazine by simply zipping the jpgs and changing the file extension to cbz.  Cool.
posted by Mark Oates on 28/5/2009 22:15