With the news midweek that ADV UK had followed its US counterpart into a state of meltdown when it came to new releases, some good news would be a little timely right now. Fortunately I found four snippets of optimism to appreciate last week, although some are more tenuous than most. First comes the news that Fox has optioned Cowboy Bebop for a live action movie. See Anime News Network for more details. You can see by my reviews of the anime on this site that this is one property ripe for a big screen adaptation. Surface comparisons have been made to Firefly, although Bebop is fundamentally quite different (It's better!). My usual scepticism about Hollywood aside, and with the usual proviso regarding Hollywood options and development hell, this is news to be cautiously excited about.

Somewhat more concrete is the news that Afro Samurai is due a sequel, with Samuel L. Jackson returning to the title role in Afro Samurai: Resurrection. The trailer has already aired at Comicon, and Funimation has obtained the rights to distribute it on DVD sometime in 2009. I can say with confidence that you can start saving up those pennies right now. Anime on DVD provide the links.

There's more anime to be had in UK cinemas too, with Manga Entertainment bringing The Girl Who Leapt Through Time to the big screen from September 19th. It's a sci-fi adventure that basically does what it says on the tin, but what is worth noting is that it's based on a story by Tsutsui Yasutaka, who also wrote Paprika. You can read more in the press release, courtesy of UK Anime.

Finally, devotees of free and legal anime online will be pleased to hear that Funimation have put a wodge-load (technical term) of episodes online to give you a taste of their back catalogue. At their Youtube site, you'll find the first four episodes each of Kiddy Grade, Blue Gender, and Slayers to stream, while at their own site at Funimation.com, you'll find the following… 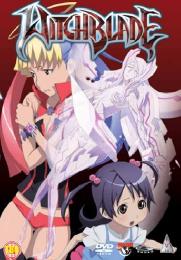 Last week's troika of anime began on Tuesday with my review of the fourth volume of Witchblade. Witchblade has for me been the surprise of the season. Coming from Gonzo, a studio which has a reputation for style over substance, Witchblade, with its scantily clad Amazon warriors and yet another dark dystopian future conspiracy, could easily have been the booby bomb of 2008. Yet I was hooked by the first three volumes. See if volume 4 managed to ensnare me further by clicking the link. 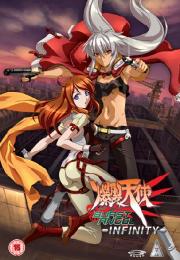 Speaking of Gonzo style over substance, on Thursday I got a look at Burst Angel: Infinity. Burst Angel exploded onto the scene a couple of years ago, and I fell in love with the cross between Bubblegum Crisis and Charlie's Angels, with its Amazon warriors fighting a dark dystopian future conspiracy… No, you're not seeing double, it's just Gonzo. But this was girls, guns and action with a Spaghetti Western vibe. Now, the OVA episode comes to the UK, and my mixed feelings prompted the review that you can click to right now. 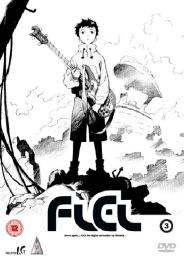 I rounded off the week on Saturday, in a state of ecstasy thanks to FLCL: Volume 3 This wild, original, imaginative, outstanding peach of a series rounded off its criminally short six episode run in this volume, and prepare to drown in a deluge of pure gush by activating your pointing device at the appropriate screen location.

MVM release Witchblade: Volume 4, Burst Angel Infinity, and FLCL: Volume 3 all on the 11th of August. And you really should buy FLCL.