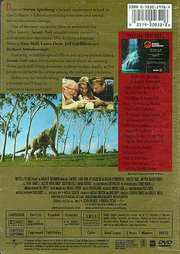 Back Cover of Jurassic Park 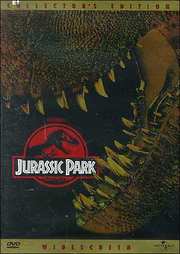 One of the most successful films in worldwide box office history, Jurassic Park remains a most compelling and spectacular experience. This thrilling adventure features Sam Neil, Laura Dern, Jeff Goldblum and Richard Attenborough.

Featuring incredible special effects and action-packed drama, Jurassic Park takes you to a remote island where an amazing theme park with living dinosaurs is about to turn deadly, as five people must battle to survive among the prehistoric predators.

This great movie back in the early 90`s still has some of its charm, although some of it simply rub off during the years.
I believe that reviewing this title was the 5th or 6th time I`ve watched the movie. This was, however, the first time I`ve seen it on DVD.
The video transfer is excellent. Everything looks great (and alive). The colors are very vivid and most of the dinosaurs look real. There are, as can be expected from a film of that magnitude, no compression marks at all, although a couple of dark scenes (in the basement, for example) did show some color bleeding and blacks turning to dark blues.
The DD 5.1 soundtrack is good. I expected the soundtrack to be more aggressive and rich, though. Don`t get me wrong - it IS aggressive, especially during the roar and stampede scenes, but several scenes lack the sound envelope I was so looking forward to.
The menus are fully animated and contain some cool sound effects.
The extras include a lot of behind the scenes documentaries, which are all very good. The dinosaur encyclopedia is particularly interesting. There are, however, two reasons why the extras are far from being perfect. The first is the so-called "Jurassic Park III" trailer - what a rip off. A couple of lightnings, that`s all. The second is the lack of a commentary track, which would`ve been simply awesome. Come on, Spielberg.
Bottom line - despite the minor glitches, this is a great movie for the entire family. I DO advise you, though, to keep your pets away from your speakers while playing this movie. The roars freaked out my dog and cat.
posted by Zvi Josef on 3/11/2000 15:35
9 / 10

Ok, the first movie I ever really fell in love with. Yep, I like this film that much. While it isn`t a masterpiece (we`ll leave that for some of my other favs, like American Beauty and Memento) it IS highly entertaining, gobsmacking fun, even when, like me, you have simply lost count of how many times you`ve seen it (although I think its somewhere in the 70`s!)

OK, so since I`ve said that, no need to mention the content. SO instead, I`ll go with the rest. Picture wise, its great. Not flawless, not reference quality, but great nonetheless. Sound wiese, good stuff too, earth shattering in places, (and yes, I`ve had to say sorry to my neighbours, although they guessed I was watching Jurassic Park when I said!)

Features wise, its not totally comprehensive (i.e. no commentary) but what there is is good fun. An excellent documentary, including a very funny look at when T-Rex got wet and got the shakes.... yeah, you have to see it to believe it. Animatics, storyboards, on location scouting with Spielberg behind the Handycam.... a good quick galnce at what it takes to make a movie like this.