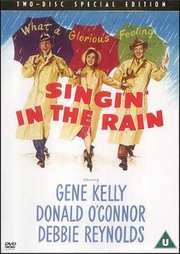 Synopsis:
Singin` In The Rain is widely considered the greatest ever Hollywood musical. Possessing all the magic ingredients of star quality in Gene Kelly and Debbie Reynolds with the most amazing dance sequences, memorable songs, story line and laugh out loud comedy. The setting is 1927 Hollywood during the transition from silent movies to talkies with Don Lockwood (Gene Kelly) and Lina Lamont (Jean Hagen) the darlings of the silent silver screen. Off screen, Don, aided by his happy-go-lucky friend and piano accompanist, Cosmo Brown (Donald O`Connor), has to dodge Lina`s romantic overtures, especially when he falls for chorus girl Kathy Selden (Debbie Reynolds).

With the advent of sound in motion pictures, it is decided to turn Don and Lina`s new film into a talkie and a musical at that. The only problem is Lina`s voice, which could shatter glass. Don`s brainwave to get Kathy to dub over Lina`s speaking and singing voice in secret backfires when Lina finds out about the romance...

MOVIE
I`m only 18, but I just think that this is one of the best movies of all time. And this 50th Anniversary Edition provided the opportunity to see it in the best condition yet. The plot, as with many musicals is very slim, but it is set in the 1920`s just as the talkies were coming to be popular, and portrays the problems one studio had converting it`s newest film starring it`s biggest on screen pairing into a musical. However, unlike many other musiacals I have seen, the songs used in the film-all of which had been used in older films- all match into the the wonderful story. Also, even now, this is a very funny film, and plays very well on the idea of celebrity at the time, as well as there being many other vey funny lines, mostly from Cosmo. It is a wonder that this film hasn`t dated much at all, but it is a testament to the film-makers that it hasn`t. A true masterpiece that will never be forgotten.

VIDEO
This is a 50 year old film, so I wasn`t really expecting any miracles with the picture, but it really is. It`s only in the 4:3 ratio, but this is because the film is 50 years old, and this was the academy ratio then. But the picture is incredible, and if it wasn`t for the garish colours that films had then, the film could be 30-35 years younger. For the best example, get straight to the signature tune. That is a terstament to how good the picture is, particularly if you compare it to the trailer also on the disc.

AUDIO
The movie has been remixed up to 5.1 from the original mono trracks, and it isn`t bad. There is very clear dialogue throughout and some use of surrounds. Again, it is best to tell in the signature tune.

EXTRAS
For a 50 year old film to get such extensive extras, it is a wonder. The best is the fact there is an audio commentary. Not with some film historians or experts, but in fact with anyone that is still alive that worked on the film, including the two stars, Donald O` Connor and Debbuie Reynolds. Baz Lurhmann also makes an appearance. It is a very interesting commentary, altthough a little difficult to listen to sometimes because of Debbie Reynolds slightly over explanitory and over excited voice. Still, it is an achievement to get all these people to contribute. Onto disc two, and there are two documentaries. One is on the Arthuur Freed MGM musicals and lasts for one and a half hours. The other is soley on Singin` in the Rain and is hosted by Debbie Reynolds. This documentary is very intersting and is worth a look. To round off the disc there is an alternate scene, and also some excellent footage of the songs from the movie in their original films. Finally, there are some socoring stage sessions that is audio only. The quality of some of this old footage isn`t great, but it is great to see the original Singin` in the Rain, and then go back to the film and sopt the homage Gene Kelly paid to it.

OVERALL
This is a truly classic film. Everyone knows that. But the extras Warner have laden this with make it a must have for all fans of the film. It is difficult to find in the shops, who only stock the bare bones release. I got it online for £20, but it really is worth it.
posted by cartoonjonah on 13/6/2003 15:08