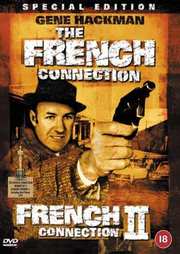 Synopsis:
The French Connection
Detectives Jimmy "Popeye" Doyle (Gene Hackman) and his partner Buddy "Cloudy" Russo (Roy Scheider) work the crime streets of New York. On the basis of a tip off and some curious goings-on from various known criminals, they use undercover surveillance on a French gang who are threatening to pull off a huge drugs import deal worth millions of dollars.

Initially faced with scepticism from their department, Popeye is convinced the deal is going to happen real soon. But with no hard evidence and some previously failed raids, the duo are taken off the case. Doyle continues with his unorthodox policing methods and stumbles upon an international drug deal between the New York mobsters and their French counterparts. Doyle`s nemesis is an urbane French drug smuggler Alain "Frog One" Charnier (Fernando Rey) who seems to outwit Doyle every step of the way.

Based on the novel by Robin Moore and the actual experiences of two New York City cops in the biggest narcotics raid of 1962 - Sonny Grosso and the late Eddie Egan, The French Connection is a fast-paced gritty documentation of the seedy vice underworld.

The French Connection won 5 Oscars at the 1972 Academy Awards, including Best Picture, Best Actor for Gene Hackman and Best Director for William Friedkin (later director of The Exorcist). Presented in Dolby Digital 5.1 Audio.

French Connection 2
The French Connection was only the beginning - this is the climax. Popeye Doyle heads for Marseilles, France, to capture Charnier, the powerful drug dealer who eluded him in the first film. But Doyle doesn`t realise that his fellow policemen have set him up. As a result, he`s kidnapped by Charnier`s goons, who drug him with enough heroin to leave him addicted to the deadly narcotic. Doyle`s attempt to kick the habit takes him to hell and back, but once back to health, he becomes obsessed with catching Charnier, and won`t let anything stand in his way. Presented in Dolby Digital 2.0 Audio.

This ultimate release on DVD includes cast and crew commentaries on both films including Gene Hackman, Roy Scheider and William Friedkin. Also included on the third disc are two documentaries about the story behind The French Connection. The first is "The Poughkeepsie Shuffle", a BBC documentary presented by Mark Kermode that tracks the film from inception to reaction via interviews with those connected to the film including some of the real people the characters are based on. The second documentary is "Making the Connection: The Untold Stories" which provides even more interviews with cast, crew and beyond, with a focus on the aftermath and how the film was received. The disc also includes a selection of seven deleted scenes, stills galleries, a William Friedkin featurette and the original theatrical trailers.