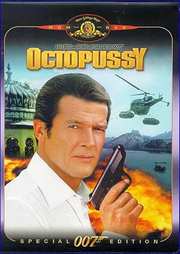 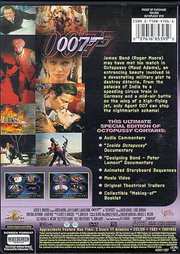 In this adventure James Bond replaces another agent who turns up dead after acquiring a jewelled egg. Bond finds out that someone is duplicating the jewelled egg amongst other expensive items and is smuggling them using a travelling Circus organised by an enchanted beauty called Octopussy. Bond traces the movements of a character called Khan, ending up in India and foiling Khan`s attempts to get rid of him. The plot thickens as a Russian connection is also involved with the smuggling and a bomb detonation at a US air force base, which 007 has to race to stop before chasing the culprits responsible via train and plane.

Without going into detail yet it has to be said that Octopussy has some really impressive visuals in the movie making up for the few cases of bad blue screen and optical work, the locations and sets alone are impressive throughout. The DVD is presented in an anamorphic widescreen version 2.35:1 despite flickers of either black or white dropouts appearing on high brightness or dark shots, the picture quality is clear, the colours are bold and vibrant especially on the sunny daytime opening sequence, skin tones of the characters are also well defined and natural looking. The dark night scenes are bold in dark colour but no detail is lost and the light shines through where intended.
The Taj Mahal is a nice widescreen shot to be desired, it is very clean and impressive and gives scale to a lot of the surrounding scene and is also the opening scene for a lot more of the cultural Indian scenery that can also be seen in some of the street shots. There is also other eye feasts using the widescreen shots, The Monsoon Palace before Bond awakes in one scene and the plane hanger exploding in the opening pre credits sequence during the Acrostar Minijet flight, which was exciting to watch on the exterior shots but the optical parts look dated and add a bad point. The meeting between General Gogol, Orlov and other Russians was done in a large empty room with size and scale enhanced by more zoomed in and out widescreen shots.
Along side the nice widescreen shots for the visuals is the scenes, sets and locations all of which are finely detailed and impressive, the interior shots of the gambling casino are pleasant, posh and like a high roller suite! The interiors of the palace are lavish and full of splendour and very well designed and set out as is Octopussy`s palace which is a collection of colour and marble, lakes and pools very nice locale once again.
As already stated earlier I think the only minor let down on the visuals, besides the slight grain is the poor optical effects in places and are used a fair few times. The car on the rails is slightly blue screen in places and tongue in cheek but works well in the scene as does all the train sequence, more exciting stunt work than the `Back To The Future 3` train scene, a few blue screen pieces but excellent to watch. The end plane stunt is slightly tongue in cheek and unbelievable, similar to the opening plunge for the plane in `Goldeneye`, good to watch from the distant shots but the close ups have too much blue screen work revealed.
There are some faultless scenes in Octopussy that are done very well like for example the taxi chase through the crowded streets, it has an original appeal to it and has nice little touches and gags included, Vijay the tennis player, hot coals and the sword from the mouth are to name a few. Later in the story Bond starts a police chase to the airbase that has the look of a Remy Julienne stunt (who is a French stunt driver who has been used before) with high speed pursuits, hand braking the car and letting the police crash it out! Q`s lab in India has a few nice visual gags too.

The Dolby Digital 5.1 audio goes amiss here in this 1983 007 movie which is a pity really as it has a lot of exciting scenes and usage for such audio quality, instead Octopussy features the old 2.0 Dolby Surround with its pseudo centre and rear channels. The audio doesn`t have the same impact as 5.1 or DTS and more volume is needed for better involvement in the movie for it to be exciting and enjoyable. Although pseudo mono rear channels are available, rear effects can be heard whilst guns are getting shot, birds chirping or other ambience. Car engines, helicopters and all other audio effects sound clear and distinct even the ambient ones in the background. The yo-yo saw has a realistic screeching sound like metal on metal and sounds vicious while the Tarzan cry in the jungle has a comical element to it and is a nice touch. The dialogue is clear enough throughout.
The music is a bit limited in variety in this movie and various scenes play the same renditions of tune, the Octopussy soundtrack only features 14 tracks, 2 of which are the `All Time High` tune and 3 tracks are dialogue only from the movie. The battle with the girls near the end provides a 007 theme mixed with a `snake-charmer flute` theme, low bass and various instruments are included. On the scene with the manhunt for 007, jungle-nature music can be heard, a racket maybe but authentic to the scene and with different sounding instruments and racy rhythm. A few melodic renditions of `All Time High` are used and a mellow flute tune is featured while the girls row on the boat on the approach to Octopussy`s Palace.

The menu is presented with a metallic squid like shape (probably an octopus) over an animated blue background, on the main head of the shape clips of the movie loop over in filtered yellow and on each leg of squid shape there is the options to play movie, features, languages and scene selection. A short riff of brass and string plays over the menu. When the features are accessed the squid shape moves and swims off the screen. Inside the features option there is a documentary called `Inside Octopussy` which is about 35mins, designing Bond with art director running about 21mins, audio commentary, 2 storyboard sequences, 4 trailers and music video to `All Time High`. There is also a selection of languages and subtitles available. The opening of the menu like with all the special edition 007 DVDs has been done brilliantly, well coloured and animated.

Octopussy`s visual styles, locations, sets and action sequences make this a worthy look DVD even if this isn`t one of your favourite 007 movies, there are a few gripes and bad pointers but nothing that couldn`t have been helped at the time of production Roger Moore plays his charmed role well, and the character of Orlov (Steven Berkoff) is a mean officer and his role is similar to that of Colonel Ourumov from `Goldeneye`. His evil twisted streak leads him to not care for nobody and only himself and his ideals, it is a pity that he wasn`t the main role villain as his acting was great and he would have been top notch. Having a remastered Dolby Digital 5.1 track would have been even better but on the whole an interesting plot and plenty to see.
When the DVD is stopped and the title or `jacket cover` picture appears, notice the bad mistake, it reads `Diamonds Are Forever` that`s not the movie I just watched was it?