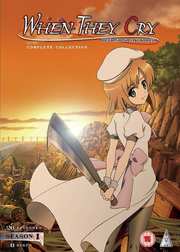 Review for Higurashi: When They Cry Season 1 Collection

If there’s one genre in anime that I shy away from, it’s horror. If it’s two, it’s horror and giant robots, but I digress. I just don’t choose to watch a horror movie, or a horror series, although if I do see a good one, I will be entertained, and will even shell out money for it. So my interest in Higurashi has never been anything other than professional. Based on a videogame, it’s a franchise that has grown and grown over the years, encompassing the 3 TV series that are now coming to the UK, OVA episodes, and a couple of live action movies as well. Then there’s Umineko... I may not be a fan, but there are plenty of fans out there, fans who have wanted a UK release of the Higurashi franchise for over ten years now, and it has long been rumoured to get a UK release, with practically every anime distributor having ‘acquired’ the franchise at one time or another. 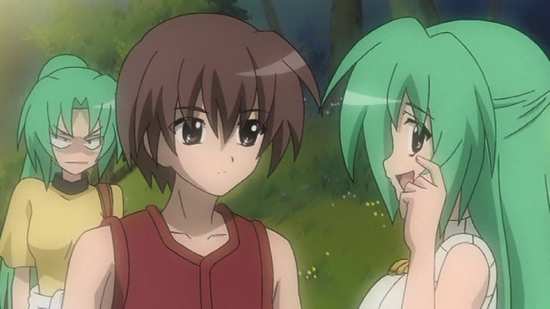 It’s been a long time coming as well, with Higurashi – When They Cry first released in the US by Geneon back in 2007. Funimation picked up the licence when Geneon stopped trading, and when that licence expired, Sentai Filmworks picked it up and gave the first series a re-release, along with debuting the second and third series as well, and giving the whole kit and caboodle the Blu-ray treatment on top. It’s been over ten years, but we in the UK are finally getting the Higurashi franchise, and it turns out that it was the MVM rumour that was true, as they are releasing the three series separately on DVD, and in one big Blu-ray bundle. 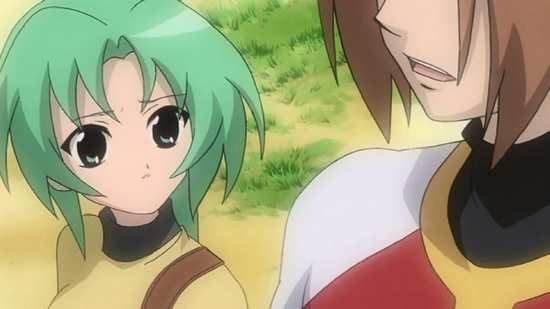 Actually, given that Higurashi – When They Cry was first broadcast in 2006, it’s a show that comes from the heart of that NTSC digipaint era that preceded HD anime, when anime was resolutely in SD. MVM have stated that by the end of this year, they’ll be winding down the release of anime on DVD. It’s a good thing that Higurashi snuck in before then, as this might just be one show that looks better in standard definition. 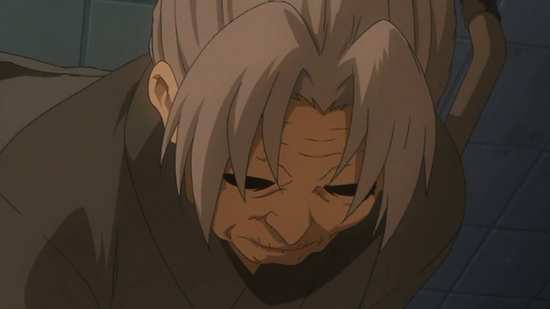 Higurashi: When They Cry tells the story of Keiichi Maebara, a boy from Tokyo who moves to a small isolated village called Hinamizawa in 1983. The population is small, and school consists of just one classroom with children of all ages learning together. But Keiichi quickly makes a circle of friends, local girls Mion Sonozaki, Satoko Hojo, and Rika Furude, as well as a girl named Rena Ryugu, who moved to the village the previous year. Most small communities have their secrets, but there is something seriously dark going on in Hinamizawa. Every year at the Watanagashi festival, someone goes missing, and someone is murdered, and as Keiichi investigates, he soon realises that his new friends aren’t who they seem to be. 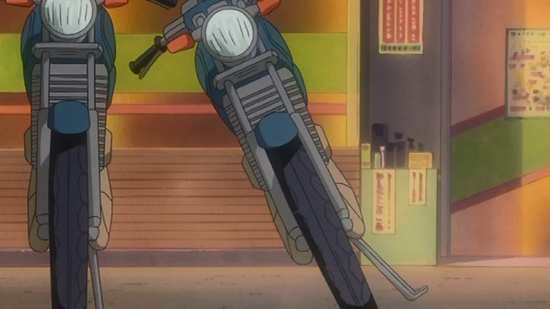 Six arcs of Higurashi, 26 episodes are presented across 6 DVDs from MVM, with one arc on each disc.

Disc 1. Spirited Away By The Demon
1. The Beginning
2. The Secret
3. Suspicion
4. Disturbance 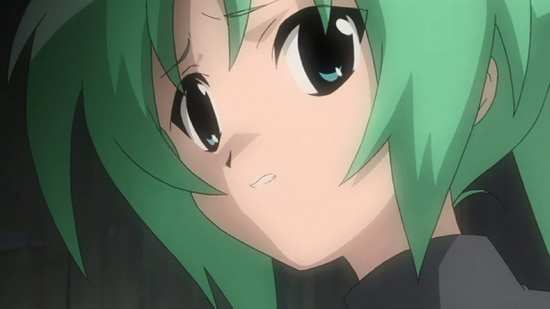 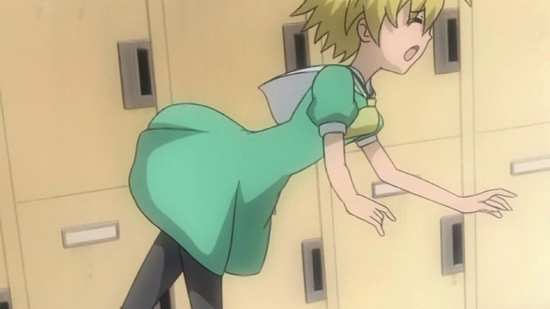 Higurashi When They Cry gets a 1.78:1 anamorphic NTSC transfer on these discs, and it’s hard to believe that this is a show from 2006, the same year that gave us the fantastic Ergo Proxy. Higurashi on the other hand is a distinctly lacklustre experience when it comes to the visuals. The character designs are simplistic, as is the world design, and the animation is minimal. It looks like a Flash animation, and an old one at that. Colours are basic and flat, and character designs refuse to stay on model for long. The simplicity of the digipaint animation is also telling in the level of aliasing visible during the show. You want to have kept an old CRT TV to watch it on, as seeing it scaled up to a flat panel HD display does it no favours. About the only saving grace is the ‘psycho face’. When previously normal, cute characters turn murderous and crazy, the transformations are spectacular. 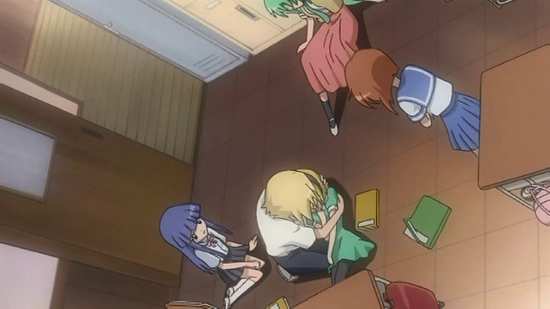 You have the choice between DD 2.0 Stereo English and Japanese, with subtitles and signs locked to the appropriate track. The dialogue is clear, and the show gets decent enough stereo separation to enhance the mood and drive the drama of the story. The most notable aspect of the music has to be the opening theme, but the incidental music does its job effectively. I checked that the dub exists, but didn’t listen to it long enough to form an opinion. The subtitles are accurately timed and are free of typos. 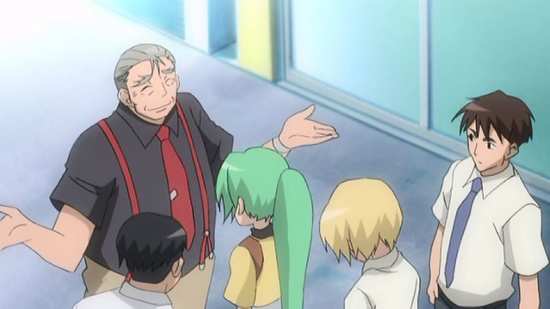 The discs present their content with static menus and each episode is followed by a translated English credit reel. 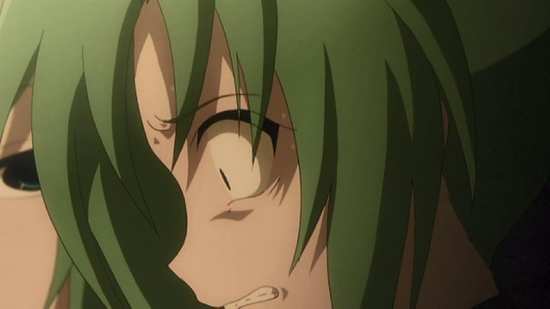 This is one of those rare times where you have to watch the whole series, all 26 episodes. You can’t watch Higurashi: When They Cry piecemeal, just try an arc out and leave it at that, because this show looks deceptively awful. It’s a fan favourite, much lauded, often talked about, the source of endless memes, and it has been demanded by UK fans for over ten years. And when I started watching it, saw the first arc, then the second and the third, my reaction was to doubt the collective sanity of my fellow anime fans. It took me until the final arc in this collection to get the point. 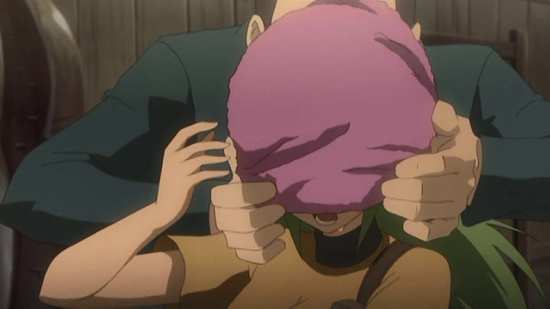 Higurashi with one exception relates the events in the village of Hinamizawa during the Cotton Drifting Festival in the summer of 1983. It focuses on a group of school friends, a little gang of one boy and four girls, and we see the situation that summer through their eyes. A few years previously, local opposition to a dam planned in the area ended in a mysterious and tragic way, and each summer since, during that festival, the tragedy has reoccurred. The summer of 1983 will see tragedy strike the friends. 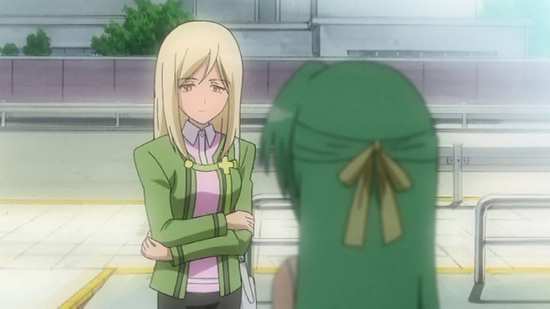 Here’s the thing about Higurashi. It’s adapted from a videogame, and it seems at first glance to play out like a visual novel, with five of the six arcs in the story like different routes through the game. This collection has each arc on a separate disc, so you essentially get six stories here. The themes are common though, friendships torn apart by suspicion and paranoia, with psychotic violence ultimately erupting. It all ties into the dark history of the town, reaching back to the dam incident and beyond. 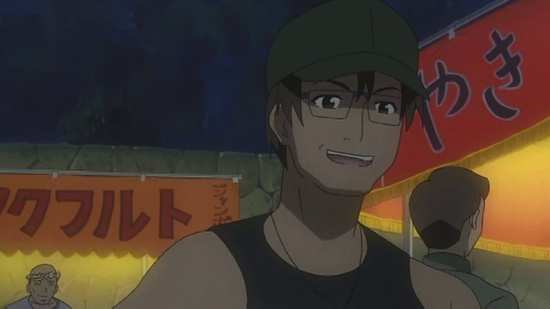 The visuals of Higurashi are the immediate turn-off. It’s animated really quite poorly, even for 2006, although given the gore and violence in the show, it might be considered a blessing in disguise, to keep it more stylised than realistic. The second thing is the clumsy way that it deals exposition, confronting you on more than one occasion with a police detective who’s far too happy to share all the details of a murder investigation with a school child. Then there are the characterisations, with cute, moe girls turning psychotic at the drop of an axe, the protagonist Keiichi doing utterly stupid things on more than one occasion, with things constantly happening for narrative reasons ahead of character reality, but if you stick around for all 26 episodes, you’ll learn that there is a reason for that. 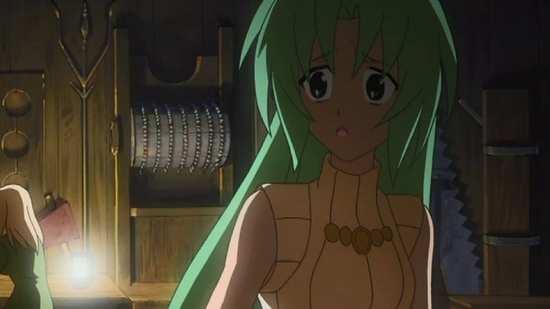 The first three discs offer three run-throughs of the story, with the protagonists and antagonists changing each time, even the personalities of the characters. Spirited Away by the Demon focuses on Keiichi, Rena and Mion, with Keiichi learning more about the village that his family has just moved to, and being corrupted by its darkness. The second time around looks at Mion’s family, the Sonozakis, and the prominent role they have in the village. We also get to meet Mion’s twin sister. Once again, tragedy unfolds in the most confusing arc of the series. The third arc, Curse Killing focuses more on Satoko’s situation, her missing older brother, and her abusive adoptive family. The fourth arc is like a bonus, two episodes that are set a few years previously during the dam incident, and this offers some background to the 1983 stories. 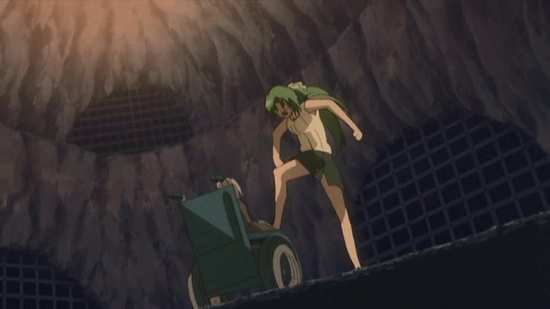 It’s the fifth disc where Higurashi: When They Cry finally starts to come together, as this actually re-tells the story of the second arc again, but this time from a different character’s perspective. It fills in plot holes, and answers questions that you may not even know that you had. The conclusion of Eye Opening is probably the first satisfying moment that you’ll have with this series. If that is satisfying though, it’s nothing compared to the final arc, Atonement, where the pieces really do begin to fall into place, not just for one arc, but the whole series. You begin to see how all of the arcs in this series are connected, that they’re not just separate routes through a game. 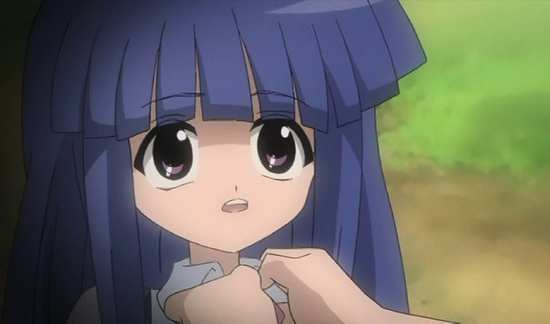 Psychological horror is never my first genre pick when it comes to something to watch, and the novelty value of cute girls doing psychotic things with meat cleavers only goes so far. Add to that a show that we’ve waited so long for that it will never meet the expectations generated by hype, and a series that you really have to invest in for the long term to get something out of it, and you might expect me to talk Higurashi When They Cry down. But it surprised me in the end, I actually felt glad I had spent the time to watch it. I’m now curious to see what the sequels will add to the experience.