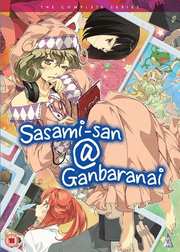 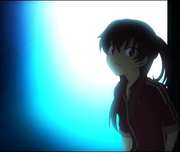 Review for Sasami-San@Ganbaranai: The Complete Series

It’s a thing in videogames, the game engine. You make a cracking game, a best seller, but gaming being an industry of genres and styles, you realise that the code that you wrote to run that game can and should be used for other games in that genre. You don’t just throw it away and start again from scratch. That would be reinventing the wheel. It must be the same for anime, and especially Studio SHAFT who with their Monogatari franchise have perfected an animation style that appeals to hardcore and casual fans alike, quirky, stylish and practically a signature for the company. You don’t have to wait for a credit sequence to know you’re watching a SHAFT anime. nas-imasaS[at]ianarabnaG is the latest show which despite all visual indications isn’t actually a Monogatari spin-off. It’s just a smidge too pastel for that. It’s also another one of those shows that have been getting my goat of late, just like the recently reviewed Oreimo, a show that has a forbidden relationship between siblings as an aspect of its story. But nas-imasaS[at]ianarabnaG isn’t quite as obnoxious about it as I remember from when it was streamed. 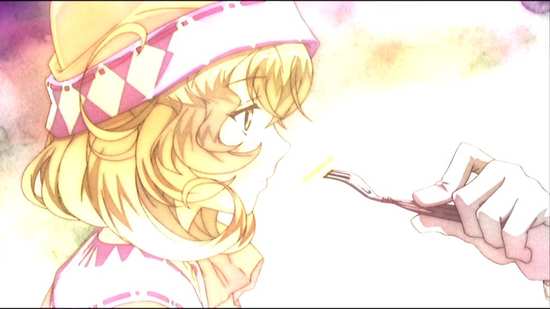 Sasami Tsukuyomi is a shut-in. The very idea of stepping outside of her house causes her to keel over in a panic. Besides who needs to go outside when she has the Internet at her fingertips, the ability to order any game or anime or piece of merchandising she likes, and most importantly her older brother Kamiomi doting on her, waiting on her hand and foot, fulfilling her every need, when he isn’t at work as a teacher. It would be so much easier for him to offer round the clock service if she would go to school, but there are limits. 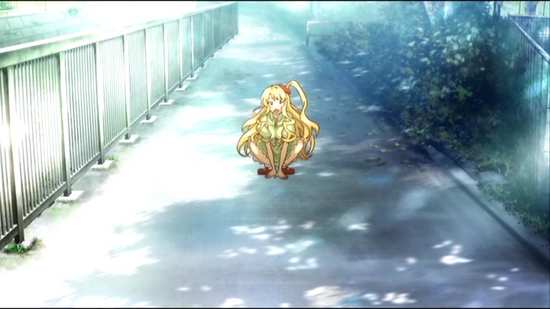 Sasami also has the power of a god. An ability that has been passed down through her family for generations, and an ability she chose to run from, when she discovered the world outside of the Tsukuyomi Shrine. Naturally the family wants their carefully bred priestess back, but this power also allows for the alteration of the world, a change in reality to protect its wielder or fulfil her every whim. This could be problematic if she starts obsessing about chocolate for instance, but fortunately there are three divine sisters at the school, teacher Tsurugi Yagami, and her younger sisters Kagami and Tama, whose mission it is to contain these alterations. 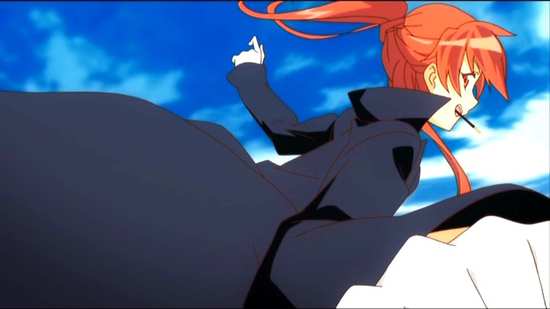 The twelve episodes of nas-imasaS[at]ianarabnaG are presented across two discs from MVM. The series is also available on Blu-ray if you are suitably equipped.

Disc 1
1. I’ll Do My Best... Starting Tomorrow
2. Security Personnel at Home
3. You work, you lose
4. Parasitizing at Home
5. I Haven’t Given it All Just Yet
6. My Parents are the Only People That I’m Troubling 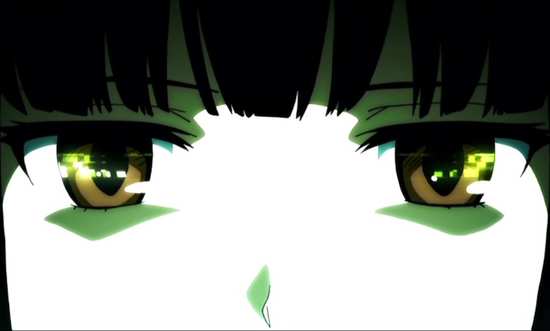 nas-imasaS[at]ianarabnaG gets a 1.78:1 anamorphic PAL transfer on these discs, courtesy of Australia’s Hanabee Entertainment. It’s a decent transfer, clear and colourful throughout, with no significant compression artefacts visible. It’s just the transfer the show deserves, as it is very much a Studio SHAFT production, very Bakemonogatari style but given a pastel makeover. So expect complex artwork, vivid and quirky compositions, and a whole lot in the way of in-jokes and visual comedy. You never see the face of Sasami’s brother for one thing, it’s always obscured by a briefcase, or a paper bag, or a fan. SHAFT’s animation style can be arresting and the talking point of a show, or it can be a messy and overly complicated distraction, and there are times in this series that it tends more to the latter than the former. Fortunately, for the quality of the SHAFT animation, this show is available on Blu-ray, and as it’s a single disc release, it’s at the same RRP as the DVD collection. 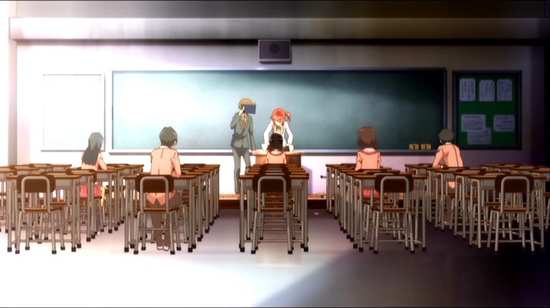 It’s a subtitle only release, with DD 2.0 Stereo Japanese audio. Having watched this show streamed previously, I have to admit that the PAL speedup was immediately noticeable on the opening theme, but that sense faded pretty quickly once I got into the show again. The subtitles are in a white font, accurately timed, and free of typographical error, but if you are one of the few that still watches a CRT television, then be aware that they aren’t overscan friendly, with bits of text disappearing off the edge of the screen. Naturally that isn’t a problem with a modern flat-panel display. There’s no problem with the audio, the characters are cast well, with an ear to their comic potential, and the show’s action is presented with suitable impact through the stereo. 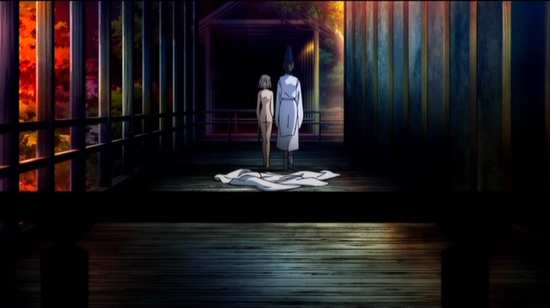 The discs present the show with static menus. The sole extras are on disc 2, and amount to the textless opening, and one of the textless closings (they all have different audio tracks). Trailers on this discs offer glimpses of Beyond the Boundary, Black Bullet, and No Game, No Life. 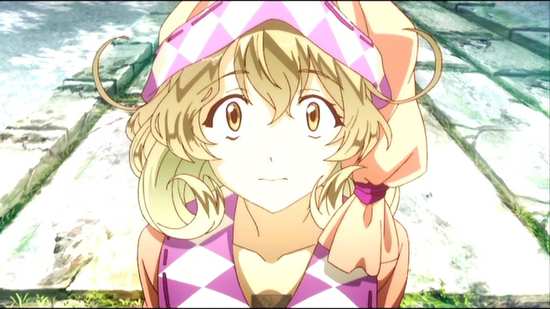 nas-imasaS[at]ianarabnaG is a pain to type, as it keeps getting auto-corrected to a hyperlink. Fortunately it’s not a pain to watch, as it’s quite entertaining, and undoubtedly has a degree of originality too it. Certainly gods haven’t interfered in the affairs of mortals in quite this way before. It’s got the SHAFT visual sensibility, and sense of humour to it, and not only aesthetically but in terms of tone and style, you could see this story taking place in the Monogatari universe. I suppose part of that comes from its light novel source material. Unlike the usual manga adaptations which turn out to be episodic, this show is arc based, with longer narratives to its story arcs, although usually just two or three episodes in length. Like most adaptations, it boils down to the quality of the source material, and while Sasami-san is fun to watch, it’s also something of a narrative mess. 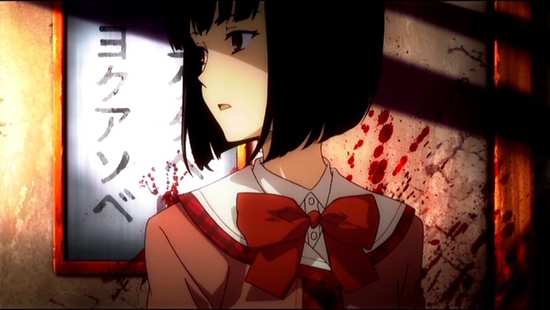 As I watched the show again, this time in marathon form, it appeared to feature a cornucopia of ideas, all thrown at the screen in the hope that something will stick. While there is an overall arc structure, and you can see the progression from episode to episode, it still doesn’t quite hang together all that well, blinding the viewer with terminology and jargon, mythnobabble for want of another word, aspects that might appeal more strongly to native Japanese audiences who have this mythology as part of their cultural upbringing. For a Western audience, less likely to adjourn to an encyclopaedia to get the background on these things, it’s a show that has to be taken at face value, and I suspect it loses much in the translation. I’ll say it again; I really miss the days when anime releases used to have glossaries and term translations, either on disc, or in a small booklet packed with the case. 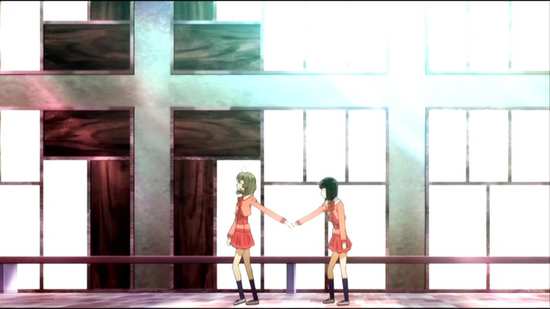 My biggest concern with the title, the taboo relationship, turned out to be not a problem at all this time. I’m not saying that Kamiomi doesn’t lust after his little sister to an uncomfortable degree, but for one thing, she certainly doesn’t reciprocate, and instead approaches it with the comedy disgust that most sisters in shows like this have. But the most important thing is that the show actually has a valid story reason for it. nas-imasaS[at]ianarabnaG is all about the power of gods, or one god in particular, Amaterasu. Tiring of her duties, she surrendered her powers to a human, an ancestor of the Tsukuyomi family, with the expectation that she’d get a lifetime’s break, while the Tsukuyomi scion would handle keeping the world in order. The thing was, that the Tsukuyomi ancestor discovered that the power would remain in the family if the bloodline was kept pure, unsullied. That meant inbreeding. And through the generations, the Tsukuyomi clan has kept the god’s power by having sisters marry brothers. The show also acknowledges the deleterious effect it has on the clan’s health, with Sasami having lost her mother at an early age. It’s amazing how an unacceptable taboo becomes less so once there is narrative justification for it.

Sasami was being brought up to be the next bearer of the power, being trained to her role, only she learned of the outside world, tired of her training, and did a runner. So when the show begins, she’s an otaku shut-in with the power of a god, being doted on and cared for by her brother, and unconsciously using her power to make her whims manifest. This could be problematic for the world, but fortunately there are a trio of gods, sisters masquerading as a teacher, a high school student, and elementary school student (albeit with physical ages reversed), who keep an eye on Sasami, and reverse the alterations she makes to the world. 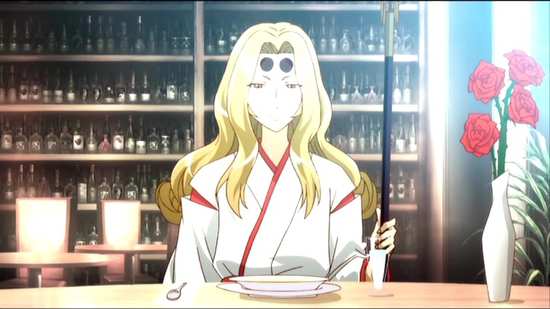 The series is all about this power and those who covet it, not least the Tsukuyomi Shrine who want to keep hold if it. The early episodes look at Sasami coming to terms with this power, getting over her agoraphobia, and learning that the Shrine has taken measures to keep control of the power, not least of which is inserting another personality in Sasami (which first manifests as a third arm). Then her mother comes back from the dead to talk some sense into her daughter, which leads to some time travel shenanigans, and which also reveals an evil, global organisation looking to take the power. This organisation is led by another high school girl, also manifesting the power of a god, only this god is male, so the manifestations get a trifle physical, which makes communal bathing a no-no. 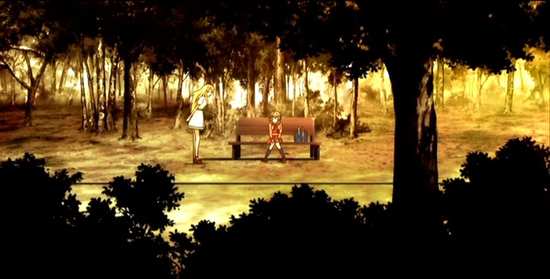 nas-imasaS[at]ianarabnaG is so jam-packed with ideas and concepts that it wants to play with, that it muddies the issue, obscures the story that it wants to tell, which is a simple, and oft-told tale of an outsider trying to fit in, the odd, awkward one at school who wants to be liked, and wants friends, and doesn’t quite know how to go about it. That she has the power of a god is another layer of complexity, but the way the story unfolds makes it look like it’s pulling in four directions at once. It can be entertaining, but dizzying at the same time.