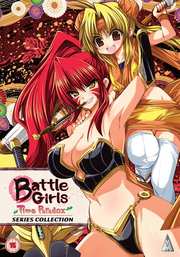 You know what they say about starting the New Year the way you mean to go on? I sincerely hope they’re wrong about that, as the first new title that I am reviewing from MVM in 2015 suffers from that BBFC indignity that I had hoped that we had seen the last of. It gets cut by 8 seconds. The BBFC has taken a look at an animation of a girl, and deemed it to be a sexually suggestive and underage drawing. Follow this chain of consequence. Battle Girls: Time Paradox was released and broadcast in Japan, which, contrary to media opinion, has broadcast standards. It isn’t surprising to see broadcast anime and indeed streamed anime have up to half the image obscured by self-imposed censorship to protect sensibilities, and as shows like Deadman Wonderland and Strike Witches have shown, such censorship can and does remain on even the supposedly unfettered home video releases. Then Battle Girls: Time Paradox was released uncut in the US, who have a Western sensibility similar to our own when it comes to what should and shouldn’t be shown on television, even if their ratings code is a wholly voluntary affair. Finally Battle Girls: Time Paradox was released uncut in Australia, who have a legally binding, mandatory ratings code, which in some respects is even stricter than the BBFC, given some of the Australian ratings for titles compared to UK ratings for the same. Battle Girls: Time Paradox, just like Ikki Tousen Dragon Destiny before it, falls afoul of the BBFC and gets fans thinking of importing just out of general principle. But is the show actually worth it? 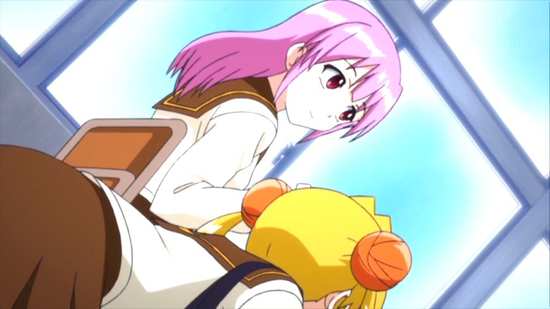 Yoshino Hide, nicknamed Hideyoshi is a typical school girl, in that her personal life is so frantic and hectic that she hardly has time for actual school work. Besides, her diminutive stature is such that getting on and off the train for her daily commute is the kind of nightmare that always has her late for class. Who has time for homework anyway when her favourite shows are on, the internet is there to be surfed, and she has to check and text her friends about the latest gossip. She’ll have to get with the program now, as her history teacher threatens her with supplementary lessons if she doesn’t pass her next test on the Warring States Period. Hideyoshi has the perfect plan to pass though, offering a prayer at a local shrine. She wasn’t expecting to wander into someone’s magic spell however. 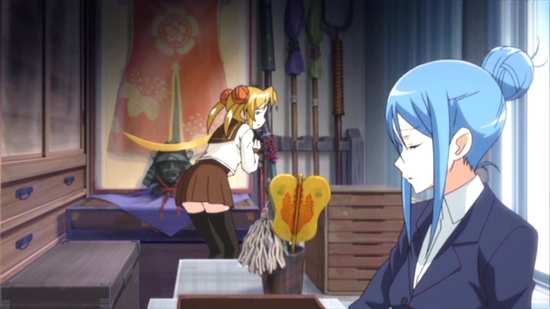 Now she’s trapped in the past, in the actual Warring States Period, and she’s just washed up on the doorstep of Nobunaga Oda. Although it’s not like the Warring States Period she’s heard about. This world only has women in it, no men (babies are grown in cabbage patches and delivered by storks), all the major figures in history are now busty young women, some of them with surprisingly familiar faces, and Nobunaga is planning to conquer the land by gathering the pieces of the mystic Crimson Armour, which guarantees success. She’s decided to take Hideyoshi and her twenty-first century worldview on as a retainer to help in this. It’s a good thing that Hideyoshi has brought her history book with her. 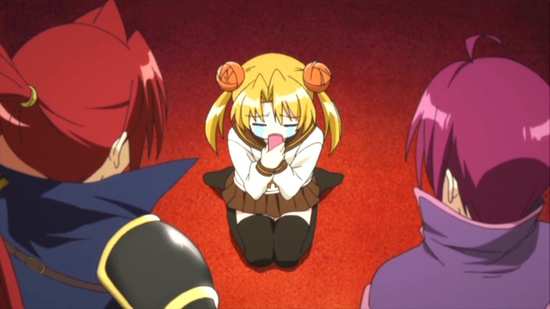 Thirteen episodes are presented across two discs from MVM. 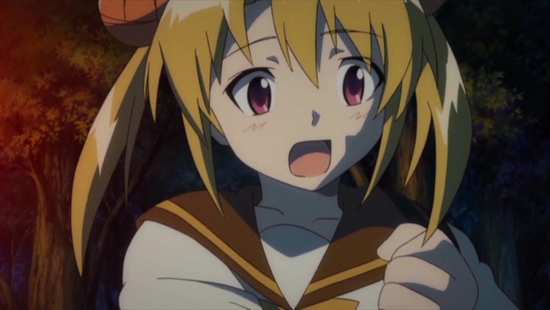 Battle Girls gets the by now usual native PAL 1.78:1 anamorphic transfer, with the show coming to the UK from Sentai via Australia’s Madman Entertainment. The image is clear and sharp, with strong colours, bringing across the animation without significant flaw, aliasing or compression. Battle Girls is one of those fan service shows, with a lot of attention applied to the character designs and boob physics. That said, it’s a comedy show at heart, and the character designs’ simplicity and stylisation reflects that. The world design too is simple but effective, with a whole lot of primary colours and bright settings. It’s all par for the course for a comedy fan service show. 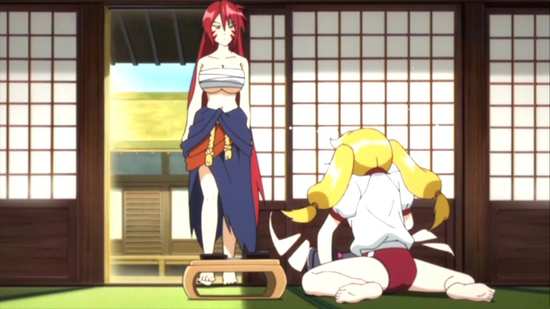 You have the choice between DD 2.0 Stereo English and Japanese, with optional translated subtitles and a signs only track. Despite the low volume level, the original language is the way to go here, with voices suited to the characters, and enthusiastic and genuine performances, if following the usual anime stereotypes. The dub on the other hand is one of the usual from Sentai Entertainment, stilted, tedious, and wholly disposable. I could bear only a minute or so of it. The subtitles are timed accurately, and are free of typographical error. 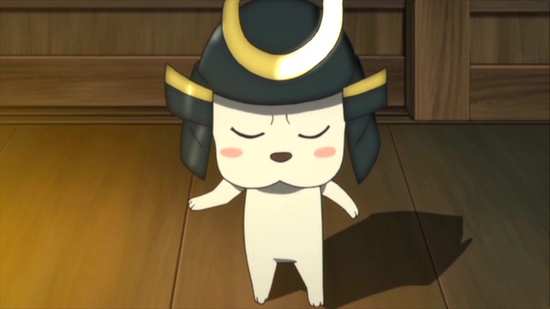 The discs present their contents with static menus and jacket pictures. This is one of the rare Madman Sentai conversions that keep the translated English credit reels after the episodes, but the next episode previews are notable by their absence. 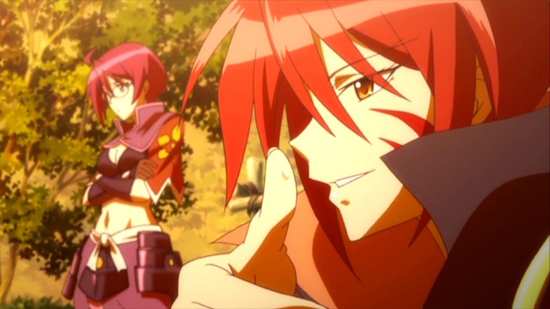 This whole review might just turn into a rant at the BBFC. I received check discs prior to the title being classified, and I assume that what I saw was uncut. I also must have seen the scene that was deemed as ‘sick, depraved and corrupting’ although I survived the experience. If that was the scene, as the BBFC haven’t gone into that much detail with their classification, then I have to wonder whether they were playing ‘edit the tail on the donkey’, rolling dice, tossing a coin, or were just having a bad day. “Cut required to remove a scene in which the nudity of a character who is presented as under 16 is presented in a sexualised manner” they say. I could say that at no point is the age of the character explicitly stated, and that in Japan, high school goes up to the age of 17, and that could be deemed as discrimination, that only tall women with breasts can be deemed as mature. But that’s really dodging the issue. What is the issue is that the BBFC have apparently ignored their own guidelines, as the scene I assume is in question is one of communal bathing, and sex most certainly isn’t on the minds of the characters. It’s a comic scene where one character desperately and pointlessly tries to protect the modesty of another. It’s supposed to be funny, not erotic, unless they mean the peeping dog with a nosebleed after the scene ends, and I bet they haven’t cut the dog out. It’s one of those daft moments where you can point to all the other, similar anime (Strike Witches, High School DxD, Panty & Stocking etc) that the BBFC have passed uncut, which were far more provocative than this. 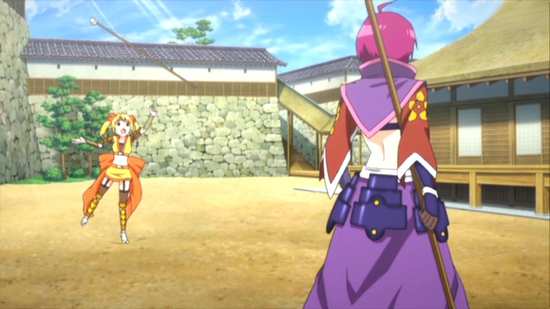 It’s shame as this storm in a bathtub is going to obscure what is really a fun, enjoyable, and charming anime, if heavy on the fan service and on the whole an utterly disposable experience, which makes it like 90% of all anime made. It does have something of a Bill and Ted premise to it, crossed with a Connecticut Yankee in King Arthur’s Court, that of a lacklustre student, who’s just been scolded for her non-existent knowledge of history, suddenly finding herself back in the past, living the events that she has to revise for her next test. The difference is that she’s in no way a willing participant in this real life revision, that she just got caught up in the wrong magic spell and wound up in the Warring States period. It also turns out to be a parallel world where the only inhabitants are female, and thus the familiar names of Japanese history are cast as women of the usual variety of anime female personalities (tsundere, moe etc). 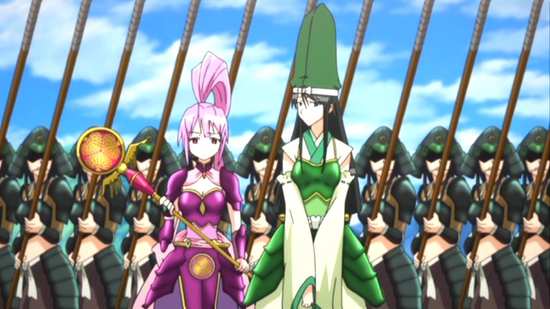 This parallel world also means that history doesn’t necessarily have to stay on track, and Hideyoshi’s arrival in the past starts to change the outlook of the powerful warlord Nobunaga Oda. Coming face to face with a whimsical, fun-loving and joyful girl with a 21st Century attitude begins to mellow and soften the heart of the ruthless warrior. In the same regard, Hideyoshi, whose life has been that of an aimless teenage girl with a world revolving around TV, social media, and shopping, finds that there is something larger than herself to believe in, a cause to devote herself to. Hideyoshi finds herself recruited as one of Nobunaga’s retainers, which causes no little jealousy in the other retainer, Akechi Mitsuhide. 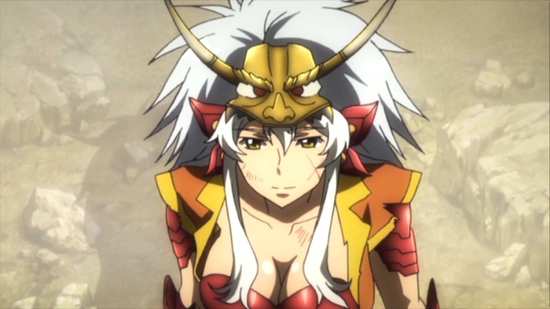 What ensues is a grand adventure, as Nobunaga embarks on a quest to gather the pieces of the Crimson Armour, reputed to guarantee conquest over the nation to she who possesses it. Akechi and Hideyoshi wind up accompanying her through the land, meeting and challenging rival warlords for the armour, with Hideyoshi at first learning how these events conform to historical accounts, and then when the recorded history starts getting bloody, Hideyoshi starts trying to change history for the better. 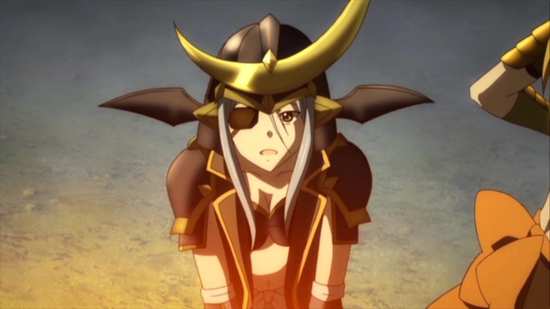 There’s a fascination with the Warring States period in Japan that rivals the fascination for the Tudor period here. They’re always revisiting it, as it is rich with characters and stories that are part of the cultural language in Japan. That’s why you’ll always see some form of anime in production set in the Warring States, and in the last few years, always an anime with Nobunaga as the main character. Battle Girls Time Paradox is a fun, entertaining adventure story, with no little fan service and played largely for comedy. I found it to be quite the unexpected delight, given the last experience I had with a Warring States anime. Sengoku Basara may have the cachet of the videogames, and all of the production values, but Battle Girls is more fun.