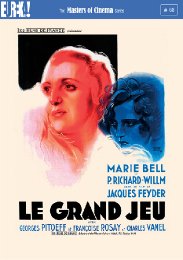 Synopsis:
A marvellous rediscovery from the golden age of French cinema, Jacques Feyder's Le grand jeu is a tragic doppelgänger romance, steered by the fate of the tarot card, and set against the dizzying exoticism of 1930s Morocco.When scandalous Parisian playboy Pierre Martel is forced by his family to leave France and his adored lover Florence (Marie Bell), he begins a new life in the Foreign Legion as Pierre Muller.  Surrounding his regret it camaraderie, whores and hellraising, he is astonished at meeting Irma (also Marie Bell), a prostitute with an uncanny resemblance to his beloved, and begins a fitful scheme to allow her escape.An early benchmark of poetic realism and a fascinating precursor to both Duviviier's Pépé le Moko and Hitchcock's Vertigo, Feyder's fluid, masterful storytelling make less a unique classic of the screen: vividly forceful yet subtle, acutely observed yet fantastic, world-weary yet tender.