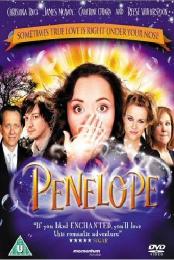 Synopsis:
Penelope is afflicted by a secret family curse that can only be broken when she is loved by one of her own kind. Hidden away in the family's majestic home, she is subjected to meeting a string of blue-bloods through her parent's futile attempt to marry her off and break the curse. Each suitor is instantly enamored with Penelope (and her sizable dowry)... until the curse is revealed.

When a willing mate cannot be found, mischievous tabloid reporter Lemon, (Peter Dinklage), hires Max, (James McAvoy), to pose as a prospective suitor in hopes of snapping a photo of the mysterious 'Penelope.' Max, who is really a down-on-his-luck gambler, finds himself drawn to Penelope and not wanting to expose or disappoint her, disappears and leaves Lemon in the lurch. Fed up by this latest betrayal and determined to live life on her own terms, Penelope breaks free from her family and goes out into the world in search of adventure - curse be damned.