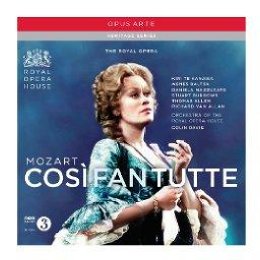 Opus Arte are beginning to release several recordings on CD of notable performances from the Royal Opera broadcast on BBC Radio 3. The first of the set, at least the first I have been sent, is of the 1981 production of Cosi (first seen at the ROH in 1968), with Kiri Te Kanawa, Thomas Allan, Stuart Burrows and Agnes Baltsa at their best.

There are a few problems with the set, one of which are the annoying sounds from the audience and stage that inevitably accompany a live performance. Not having much of an idea as to how the orginal radio broadcast sounded, I imagine there may have been some 'fiddling' with the levels to get a resonable balance for the CDs, however this has meant a near constant 'rumble' from somewhere and an orchestral sound which is almost pushed back too far in favour of the singers.

To save paper, Opus Arte have provided a link to the libretto (in pdf format) on their website, which is a great little idea, however I'm not fluent in Italian, and so count myself very lucky to have a good idea as to what's going on. Any decent libretto really should have a translation into at least one other language.

Colin Davis keeps the whole thing ticking along at a reasonable pace, and in general the orchestral sound is good, except for quite a few instances of string ensemble going awry, even in what should be fairly straighforward passages. Woodwind, and especially horn solos are superb.

Te Kanawa (this is five months before she appeared to the world in an appalling dress during Charles and Diana's wedding) is on stunning form as Fiordiligi with a sense of control in 'Ei parti... senti...' which you rarely hear nowadays.
Agnes Baltsa is also great, and despite a hint of sharpness in the upper registers, really manages to spit out the venom in 'Ah, Scostati!'

Thomas Allan (Guglielmo) and Stuart Burrows (Ferrando) also make a great team, and I'd forgotten what a superb tenor Burrows is, with a fine Italianate sense of phrasing yet with a purity you only really get with an 'English' sound (no offence meant to one of the greatest Welsh tenors there has been!)

The late Richard van Allan is a suitable cyncial and manipulative Don Alfonso (a role which Thomas Allan is now taking on with great success) and Daniela Mazzucato (a new name to me I'm ashamed to admit) is very good as Despina, obviously hamming it up enough on stage to get the required laughs.

So then, one from the archives which will certainly be of interest to those who want to hear how things sounded almost 30 years ago, yet as there are many and varied studio recordings of this work, and indeed brilliant live performances on DVD, perhaps only for Kiri fans....of which I know there are many.