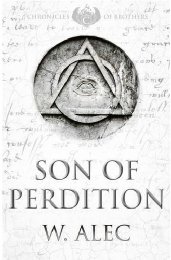 The Son of Perdition (Book Details)

Now I have to admit that Christian fiction, like music, is not a genre that I knowingly engage with. Wendy Alec's Son of Perdition, the first in the Chronicle of Brothers series, was billed by the PR blurb that came my way as a book to rival The Da Vinci Code. What I've discovered since is that this isn't quite the case. For a start, the first few books in this series, including this one, have actually been published already as early as 2006 but are now being rebranded and relaunched to reach a wider audience.

Son of Perdition is based around two different sets of characters, some human and some angelic.

The human characters are the three sons of the De Vere family, a family with vast wealth and political connections. Jason De Vere is the head of a vast media empire, Adrian De Vere is the EU President who is on the verge of bringing peace to the world in the aftermath of a nuclear war and youngest sibling Nick is a playboy archaeologist who also has AIDS. The De Vere family have a huge role to play in events to come and also at the heart of a vast conspiracy, without even being aware of it.

The angelic characters are quite simply that; angels. Brothers Michael and Gabriel from the Royal Household of Yehovah battle with sibling Lucifer, who fell during a great heavenly war and now engulfed with jealousy and revenge. Lucifer and his minions are plotting to bring about the End of Days so that the World of Men will be ruled from above, but Michael, Gabriel and their cohorts will do all they can to help the world avoid this fate.

This is a bit of a difficult book to read. I did get to the end, but it wasn't easy. It's clear that either author Alec or her publishers see the GOD TV head as a rival to Dan Brown, but sadly it doesn't quite come off. It's true that Brown has a fast paced writing style that is almost mimicked here, but when you come down to it, this isn't fast paced, it's a jumpy style that almost doesn't make sense. Brown at least gives you plenty of detail to absorb, maybe too much, but Alec decides almost every time not to give you any detail. Maybe if I was religious or more familiar with the book of Revelations, I'd understand who all the characters were meant to be. As it is, they just all get introduced with minimal fuss so I never really got to grips with just what was supposed to be happening until nearly the end of the book.

Again regarding detail, Alec tries to cram too many things into her story without really giving them any context, so you get references to the Illuminati, the Bilderberg Group, the New World Order, etc without really understanding how they all connect or sit within the narrative. There's also a link to the 9/11 attacks that feels almost tacked on. So what we actually have is an attempt at a world wide conspiracy involving all or none of the above that will lead to judgement day via Biblical prophesy. It doesn't lessen the confusion either that the story is non-linear, jumping over the decades at any given time. A couple of times I had to track back to the beginning of sections to check when the events I was reading about were meant to take place.

Now, despite all this, I do find this a little promising. I'm hoping that this book is similar to the first book in Stephen King's Dark Tower series. That one was very short, which this was isn't, but was a little confusing and not too impressive. What followed was epic though and I'm hoping this series goes in the same direction as there are some good ideas here but they really need fleshing out and slowing down so that the story can be savoured and enjoyed by the wider audience it's now being aimed at. There's just too much happening with not enough exposition for this one to be really enjoyable, let's hope it gets better as it definately has the potential.