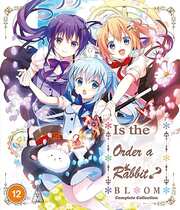 Is the Order a Rabbit? BLOOM - Season 3 (Blu-ray Details)

Review for Is the Order a Rabbit? BLOOM - Season 3

It’s convenient how ‘slice of life’ shows always find the good slices to go into the episodes. Can you imagine a slice of real life show? Waking up bleary eyed, ahead of a two hour commute to work, spent plugged into a smartphone playing Bejewelled Blitz, pointedly ignoring everyone else on the train, to work seven hours staring at a computer monitor, broken up by coffee and lunch breaks spent talking about inane reality TV shows, followed by a commute home, where you spend the evening in a petty argument with your other half, trying to decide which inane reality TV show to watch, before sinking into a sleep haunted by all those dreams you had as a youth, that you’ll never attain. Thankfully, this release of Is The Order a Rabbit? Bloom chooses all the right slices, hence it reaching that elusive third season. 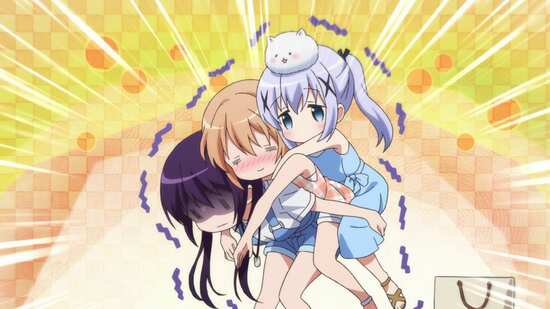 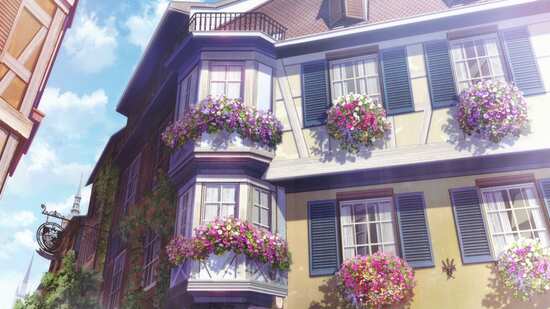 12 episodes of Is The Order a Rabbit? Bloom Season 3 are presented on two Blu-ray discs from MVM.

Disc 1
1. The Magician at the Cafe of Smiles
2. The Case of the Childhood Friend’s Stolen Heart
3. Everything in the World Serves as My Experience Points
4. A Potential Everyday Life
5. She Is a Fierce Whirlwind, She is a Carefree Breeze
6. A Fluffle of Rabbits is Also Most Welcome
7. We Shall Dance with Ghosts Until Morning On This Halloween Night!
8. Stamp, Sleep, Study, Smile
9. Chamomile with a Dash of Jealousy

Disc 2
10. A Request for Backup From a Full Heart
11. The Cafe of Smiles and the Rainbow Magician
12. I Can Take That Step Forward Because I’m Watching You 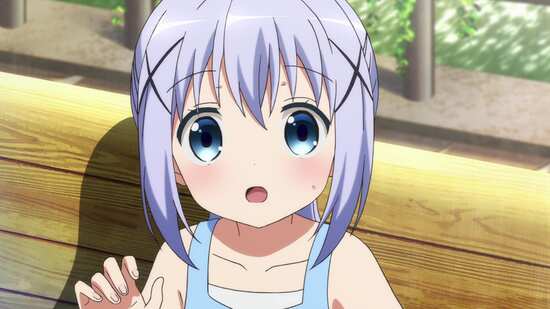 Is The Order a Rabbit? Bloom Season 3 gets a 1.78:1 widescreen 1080p transfer. The image on Blu-ray is clear and sharp throughout, with smooth animation and with a minimum of compression, aliasing or banding. Colours are rich and consistent, and detail levels are impressive. The characters follow the usual ‘cute’ aesthetic, with a little infantilism assigned to the designs. The real beauty of the show comes in the location and world design, the European style town with its historic streets and arcades all looking very pleasant and enticing. 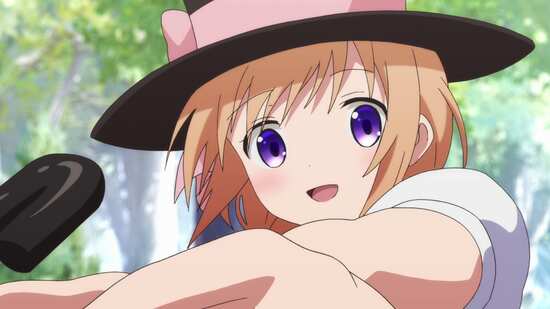 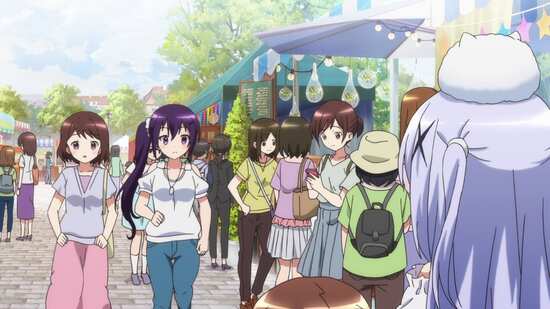 This is another one of those shows where the US translation of the dialogue throws me into a cognitive disconnect. In episode 8, the recognisable Japanese pronunciation of pudding, ‘purin’ gets translated in the subtitles to ‘flan’, and all I can think of is the disgusting cheese flan that was served in school dinners when I was kid. 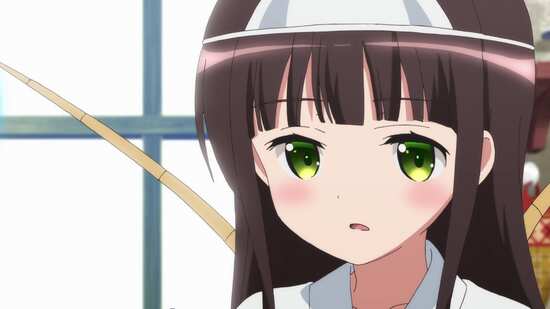 You get two discs which present their contents with static menus.

The extras are all on disc 2 and comprise the textless opening, 10 textless closings, and trailers for Princess Principal Crown Handler Chapter 1, Stella Women’s Academy, NANA, and Hidamari Sketch Graduation Arc. 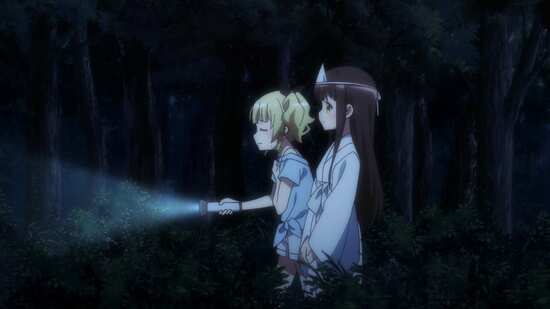 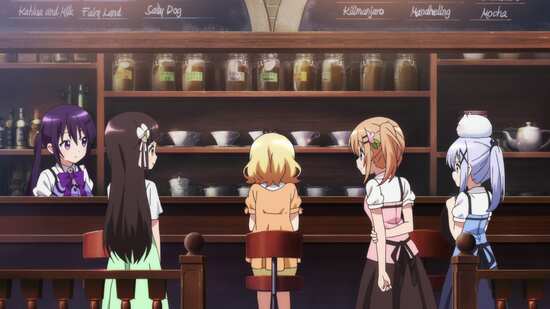 You might expect me to make some glib comment about there being a fine line between healing, and boring, but nothing could be further from the truth. I love Is the Order a Rabbit? The characters are adorable, and the setting very charming and rustic. The stories too are cute and entertaining, and if I watch the show during daylight hours, I’m glued to the screen, with nothing to distract me. As I said, once the sun goes down, all bets are off, and the show turns into a cure for insomnia. 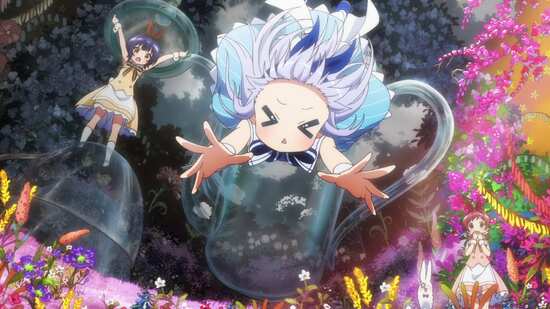 When it comes to the episodes, it is the usual stuff for this genre, episodic, mini-stories, even sketches or skits, featuring the characters as they go about their everyday lives. This third season does seem to take the show towards a natural conclusion of sorts, with Chino and her friends Megu and Maya heading towards graduating their middle school, and moving on to high school, while for Rize, it’s almost time to graduate high school and start university. So the end of this season will effectively change the character dynamics, the status quo that needs to be held for a series like this, hence the sense of a conclusion. 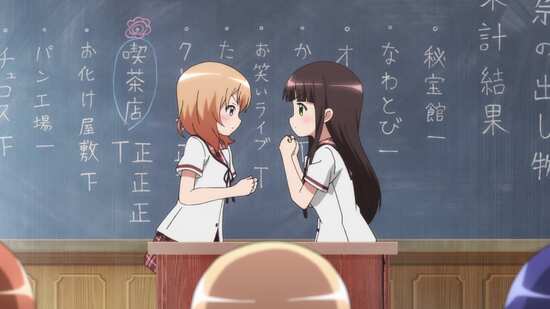 Individually, these are still episodes of cuteness, with Cocoa learning magic, new summer uniforms for the cafe, the author Aoyama Blue Mountain making a splash with a cat burglar story (Lapin the master thief), a school festival where the girls run a classroom cafe, training for a school marathon, Halloween hitting the district, Rize choosing a career, Syaro and Chiya becoming rivals for Student Council President and a trilogy of final episodes focusing on Christmas and New Year. 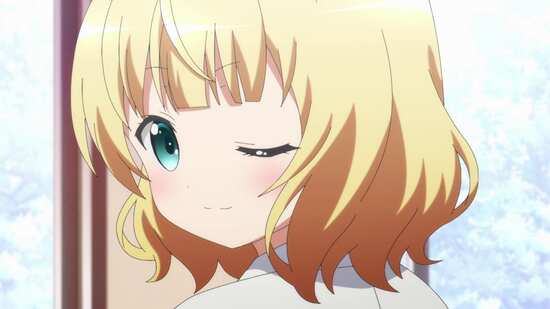 But if you’re looking for an overall sense of the story in Is the Order a Rabbit?, it is all about healing, and not just healing the audience. When we met Chino at the start of the first season, she was an introverted girl, working in the family cafe, with a few close friends, but not at all outgoing, and it turned out that she was affected by the loss of her mother at an early age. And into her life came this bubbly, effervescent, optimistic girl in Cocoa, who immediately adopted her as a little sister. As Cocoa discovered the town, and made more and more friends, she pulled Chino along with her, and Chino’s worldview started to expand. 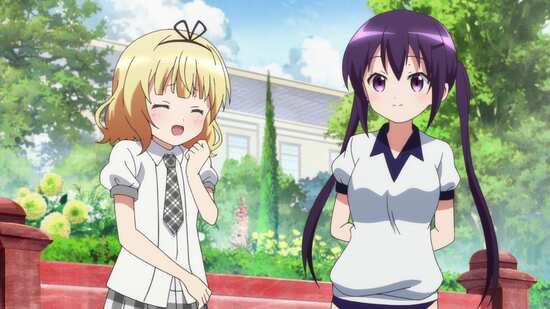 In this third season, with so many changes impending for the lives of the characters, we see just how Chino has changed, how she has become more outgoing and proactive. Through no intention of her own, Cocoa became more than just a big sister, and also took on a motherly role, and the show is utterly heart-warming in this regard, with one or two charming, and indeed magical secrets revealed in this collection of episodes. 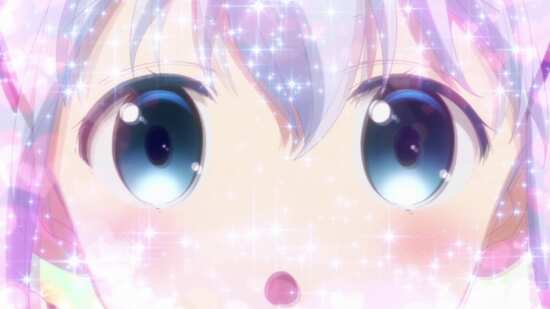 I love the Is the Order a Rabbit? series, and the third Bloom series may just be the best yet. I just have to remember to watch it before the sun sets!