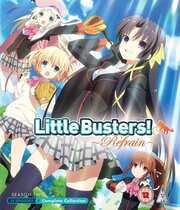 I wasn’t too impressed with the Blu-ray release of the first season of Little Busters. It was one of those early HD shows which didn’t exactly animate anywhere near to 1080 lines of resolution. Given that I double-dipped the entire series in one go, that doesn’t bode too well for the Blu-ray of the second series, Little Busters Refrain. But then again, the two series were released a year apart, and a year can be a long time when it comes animation broadcast standards. 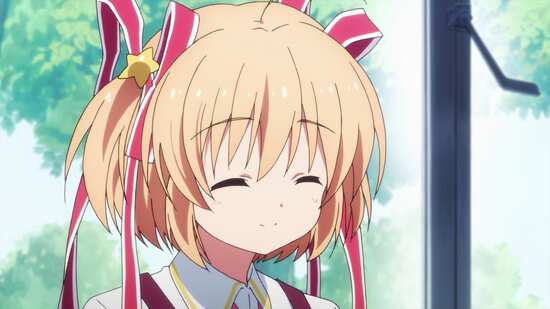 When Riki Naoe was a child, he suffered the tragic loss of his parents. But his depression began to lift when he was befriended by siblings Kyousuke and Rin Natsume, and Masato Inohara, and Kengo Miyazawa, collectively known as the Little Busters. They invited him into their gang, and made his childhood an adventure, where they were heroes of justice. Now, as Riki is in his second year of high school, Kyousuke ready to graduate, those childhood dreams have started to fade as adulthood beckons. But Riki wanted to recapture those dreams once more, and that gave Kyousuke an idea. A baseball team, called The Little Busters. First they needed four more members. Meanwhile cat lover Rin is getting little messages tied to her cats, clues to the ‘secret of the world’. 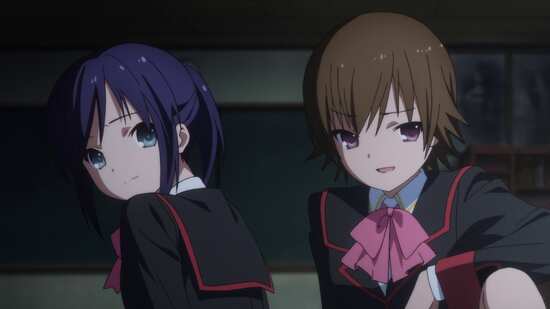 13 episodes of Little Busters! Refrain are presented across 2 Blu-rays from MVM. 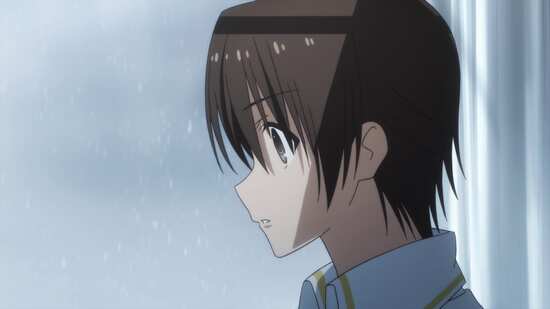 A year does make a difference in the world of anime. I may not have been impressed by the Little Busters Blu-ray, but the Blu-ray release of Little Busters Refrain definitely looks the part. This time the 1.78:1 widescreen 1080p transfer looks properly HD. The image is clear and sharp, the animation comes across without issue, and colours are strong and consistent. That’s even with the less than impressive animation for the show, compared to Key Visual titles that came from Kyoto Animation. For Little Busters, it’s Studio J.C Staff doing the honours, and they have given the show a rather lacklustre and unenthusiastic animation. The character designs are consistent, but the character animation never delivers the right level of emotion. The world design is rather pedestrian, and the animation too is one that looks to cut frame counts to save on money and effort, rather than deliver something evocative and memorable. But at least this time the detail in the line art, the richness of the colours and the smoothness of the animation makes the Blu-ray worthwhile. 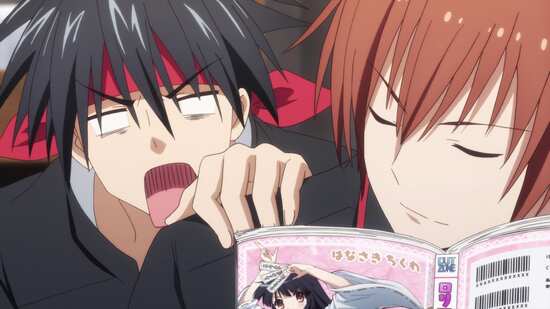 You have the choice between DTS-HD MA 2.0 Stereo English and Japanese, with translated subtitles and a signs only track locked during playback. Little Busters dates from that period when Sentai’s dubs were at their nadir, and I certainly couldn’t live with more than a minute or so of this one. Fortunately the Japanese audio is present and correct, with the cast suited well to their roles, and the overall viewing experience is more than acceptable, with the action represented well, and the show’s musical themes feeling typically game-like as for all Key/Visual anime. The credit theme songs are very catchy, if noticeably missing out on the vocal talents of Lia. The subtitles are timed accurately and free of typos. 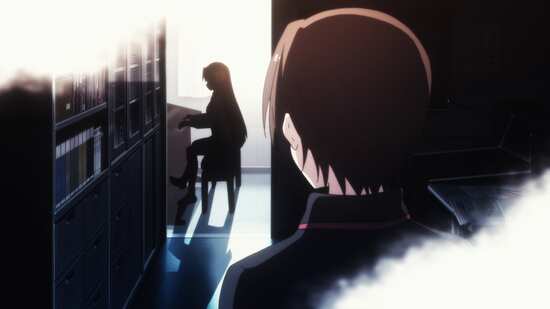 You get 2 discs on each inner face of a BD Amaray. The discs present their content with static menus and jacket pictures. Each episode is followed by a translated English credit reel. 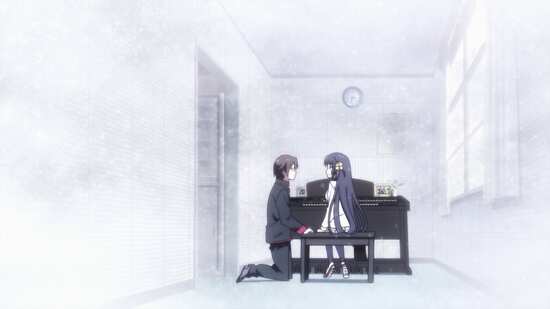 You also get trailers for Non Non Biyori (someone license this please!), Log Horizon, Muv Luv Alternative: Total Eclipse, ef ~ a tale of memories, Infinite Stratos 2, and The World God Only Knows ~ Goddesses. 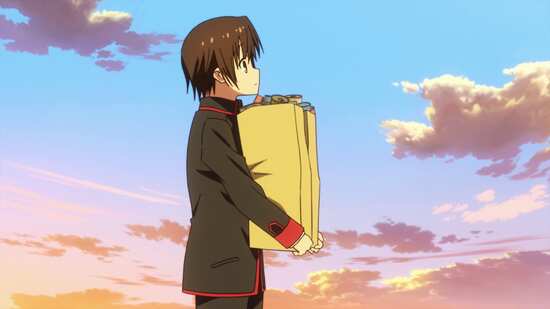 Little Busters goes all Clannad (another Jun Maeda, emotionally manipulative, visual novel adaptation) for its second series, moving on from the mostly light and fluffy fun of the first series for an unrelenting dive into tragedy and despair. On the other hand, it doesn’t have to pull a wholly contrived and frankly contemptuous rabbit out of its hat to provide a happy ending, the way Clannad did (its most significant flaw), the happy ending that Little Busters Refrain offers works with respect to its story, and doesn’t insult the intelligence. However, this is the only aspect of Little Busters that is better than Clannad, and it does indeed carry over many of the flaws from the first season, even if things do get a little more serious and dark as it heads to its conclusion. 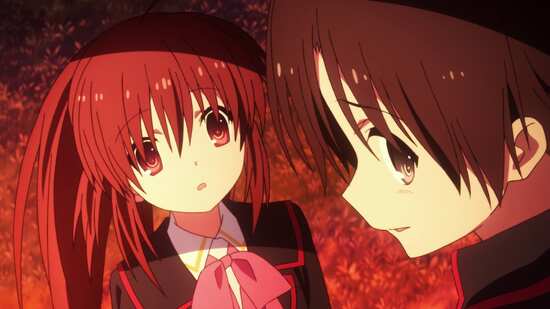 We do begin in the same vein as Little Busters, as there was one character whose story had yet to be followed through, Yuiko’s. We had a touch of the supernatural and fantastic with the earlier stories, particularly Kud’s, but things go full on strange here, as Little Busters does its own version of Endless Eight, only June 20th takes a turn for the decidedly weird as Riki tries to find his way out of the loop by helping Yuiko. And solving Yuiko’s story has an unexpected result, as does finally getting to the bottom of the cat messages that Riki and Rin have been solving. From this point the story really does focus on Riki and Rin, as the ‘secrets of this world’ begin to be divulged. We’re in serious spoiler territory here, and I’m probably saying too much when I say that Little Busters Refrain goes all Jacob’s Ladder for its conclusion. 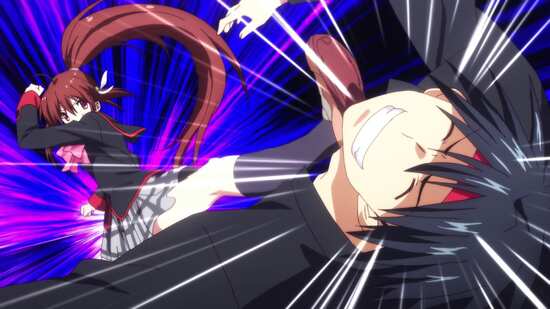 What this does have the effect of is that it makes the whole story stand up to scrutiny. It all makes sense, the odd supernatural occurrences, the messages tied to cats, the point of the baseball team, the missions that Kyousuke sets for Riki, the narcolepsy. It isn’t like Clannad, where you’re probably left asking what the point of the robot and the girl interludes were, even after it was explained. Little Busters Refrain is a worthy ending for the show, with everything neatly wrapped up with a bow. 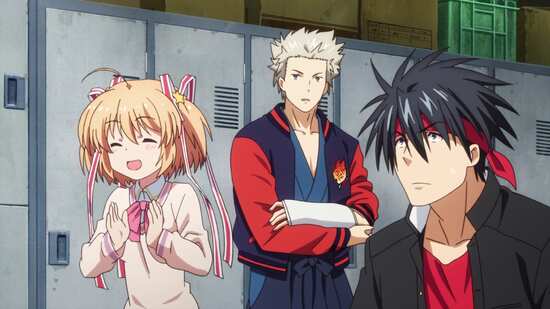 The only problem is that a great ending is pointless if the rest of the series isn’t up to scratch, and just like Little Busters, Little Busters Refrain suffers from its lower production values. Its storytelling isn’t as tight, and the characters are far too single note, lacking nuance and depth. These Key/Visual anime adaptations are supposed to echo the games that they adapt, in that through narrative contrivance, they provoke an emotional response in the viewer time and again. Each story arc is supposed to elicit tears, make you press pause while you wipe your eyes, and try and calm down for the next hit of tragicomedy. It’s a rollercoaster of emotions all the way to the final catharsis. Only Little Busters isn’t quite that good. It might nudge the emotions, but it never forces a lump in the throat, or moistens the eyes during its run time, not until its finale. 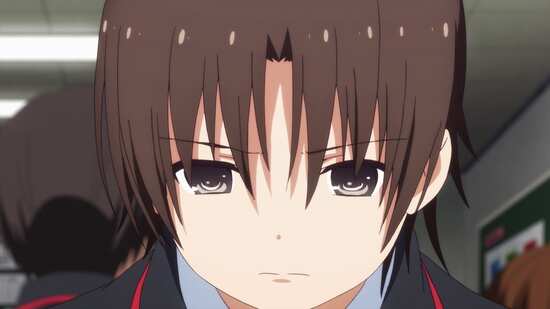 However, this second time around with Little Busters Refrain, I felt a little more sympathetic to its story, and appreciated how it managed to pull it off effectively. After a hesitant start, the second series finds its feet, and finds its groove, and knowing full well beforehand the direction the episodes would take, I could more appreciate what it was trying to do. More importantly, unlike the first series, the Blu-ray upgrade really is worth it, the animation making much better use of the higher resolution, and showing off an upgrade in production values in its final episodes, which while nowhere near Kyoto Animation standards, is enough of an uptick to make an impression.