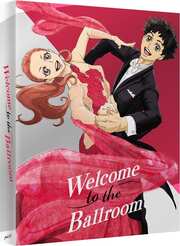 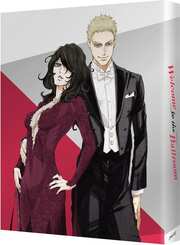 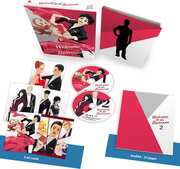 Review for Welcome to the Ballroom: Part 2 - Collector's Edition

I had more than a few problems with part 1 of Welcome to the Ballroom, not least with the presentation; it had subtitles verging on Kazé quality, but the show rubbed me the wrong way when it came to some of the characterisations, and the rather unimpressive animation. That is a problem when you’re making a show about ballroom dancing, and I wound up comparing it unfavourably to Yuri on Ice. Then the plague happened, and the deluge of anime check discs dried up to the occasional drip, and I wound up getting as picky and as choosy as any anime fan when it came to the anime that I watched. And six months later, I was still thinking about Welcome to the Ballroom. The story had got under my skin, and made enough of an impression that I wanted to know what happened next, and I wasn’t prepared to wait for the standard edition release. I was willing to wait for a suitable sale on the collector’s edition of Part 2 however, but now I have that annoying problem of trying to remember what’s what and who’s who in this show. Hopefully it satisfies that itch of mine for an entertaining story. I’m not under any illusions when it comes to the animation. 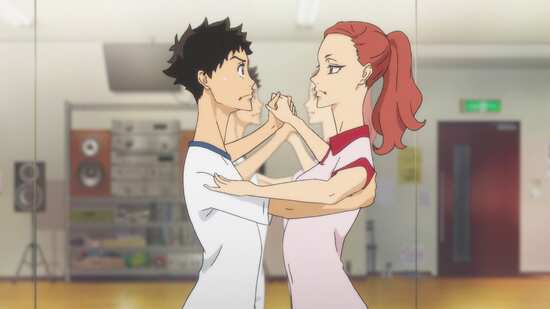 Tatara Fujita has a typical teenage problem, a lack of vision in his life. It’s something his teachers call him out on, although he feels a little solidarity when he sees classmate Shizuku Hanaoka in the faculty office for apparently the same reason. He’s wrong about her, as he learns when he runs into some bullies on the way home. A knight on a motorbike springs to his rescue, or rather Kaname Sengoku pounces on a likely candidate for lessons at the Ogasawara Dance Studio. His friendliness evaporates when he learns that Fujita can’t afford to pay for lessons, but it’s too late. Fujita has caught the bug, after seeing Sengoku dance, and especially after learning that Shizuku is a championship level ballroom dancer. 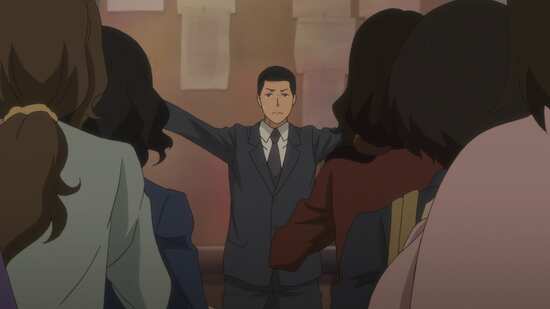 The concluding twelve episodes of Welcome to the Ballroom are presented across two Blu-rays from All the Anime, and note that at this time, this is a world exclusive English territory release for the series. 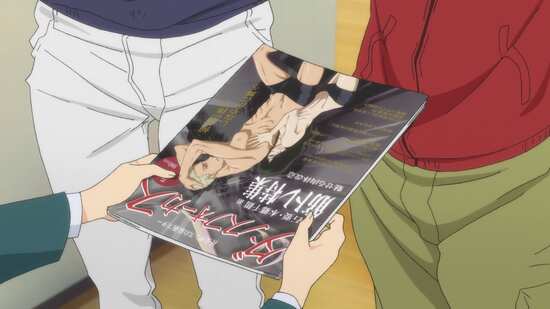 Welcome to the Ballroom gets a 1.78:1 widescreen 1080p transfer. Given the episode distribution across two dual layer discs, you’ll be pleased to hear that the image comes across without any visible compression, aliasing or banding. It’s a fine transfer, bringing across the detail and the rich colours, the smooth animation without any issue. The character designs tend to the tall and elegant, and there is an unfinished look to the character line art which makes the show stand out. Where the show falls down is the actual animation, or I’m sad to say, lack of it. With ballroom dancing you’d be right in expecting fluid, energetic, and imaginative animation, matching the energy and dynamism of the real thing, but this is one of the shows that opt for pans over freeze-frame poses of dancers with demented grins on their faces. Visually, it’s no Yuri on Ice, but given the subject matter, it really needed to be. 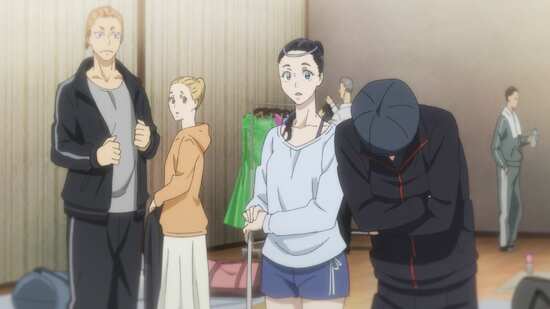 You have the sole option of PCM 2.0 Stereo Japanese with player locked subtitles. The audio is fine, the actors are suited to their roles and the dialogue comes across clearly. The stereo does what it needs to bring across the action and the music, and I have to say that I really liked the theme songs. Anime Limited put forth their usual small white subtitles, and this is another release where they can’t show too many captions on screen at one time. This is still an issue with on screen text and where there is more than one conversation going on. 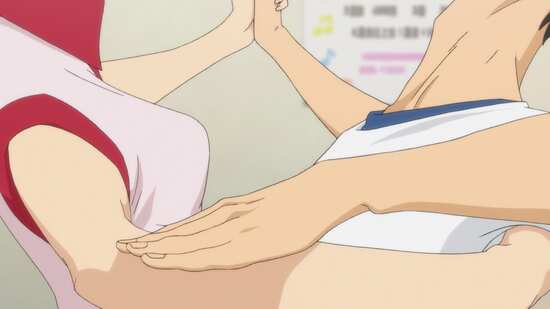 You get two discs in a digipack, held in the collector’s edition keepcase, and as you’d expect, there is plenty of character art to appreciate on the packaging. The blurb sheet was loose behind the cellophane (no unsightly glue dots), and can be kept in the case once it’s out of the packaging. 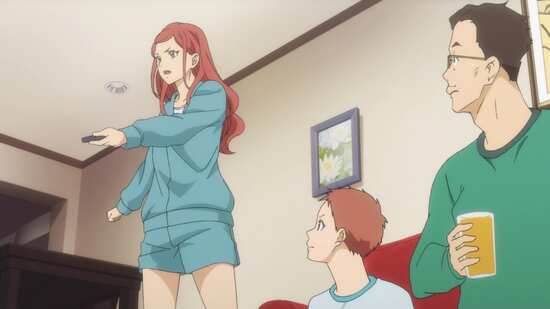 There are five glossy postcards in the pack. The 20 page booklet offers 10 pages of character art and info. There are six pages of thumbnail pics in a gallery, and three pages of artwork. 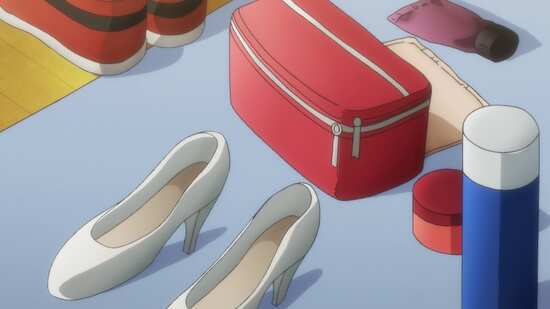 The discs present their content with animated menus. One thing I noticed was that the episode titles in the menu listing didn’t always match the subtitles in the next episode previews. There are no on disc extras with this release. 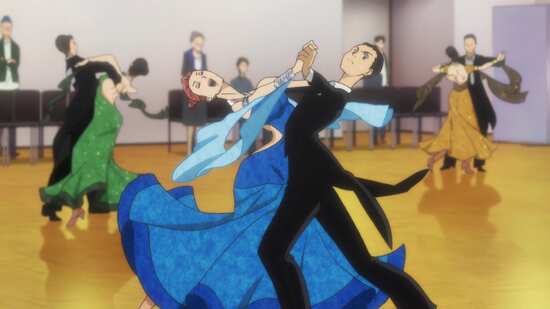 There are so many things ‘wrong’ with Welcome to the Ballroom that I could be here for dozens of paragraphs delineating them, although if you read my review for Part 1, I’ve mentioned most of them there. Part 2 continues in much the same vein, and once again I am disappointed by the quality of the animation, especially from as acclaimed a studio as Production IG. This is a show that will opt for the comfortable clichés of character and story, the simple shortcuts that will trigger the right responses in your average anime fan (there’s even a hot springs interlude during the clichéd summer training camp episode), and it’s structured like your typical sports anime, complete with the peanut gallery providing the commentary as if some unknown force compels them to state what to them and their peers in the audience would be the obvious. 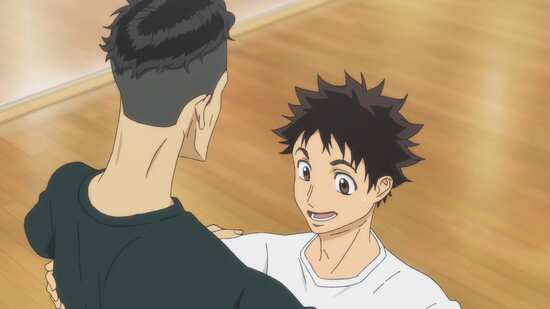 If you can live with the freeze-frame animation, you will have to put up with a whole lot of ballroom dancing without the appropriate music, often reduced to heavy clomping on wooden floors, or if there is music, it’s the show’s score, and not the appropriate music for the dance, currently being (poorly) animated. Once in a while there is appropriate music, but it’s as if the studio couldn’t afford the rights to have the show properly scored. And there is my own personal bugbear of dancers with demented grins twirling away on the dance floor. And of course any major climactic moment in the story will stop, while one of the characters will have a flashback to explain their motivations at that point in time. 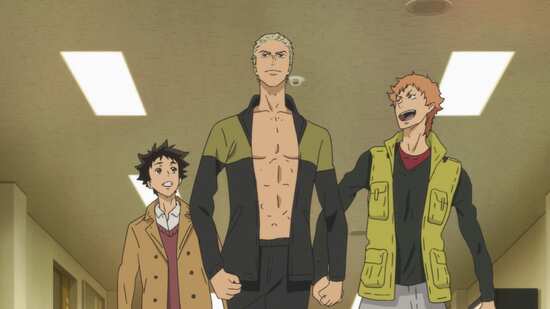 Despite all these things that Welcome to the Ballroom does wrong in my eyes, it does one, very important thing right that trumps all these complaints. It tells a good story. This is another one of those shows that is ‘one episode more’ compulsive, and time just vanishes as I watch it. It has that in common with most sports anime, the tale of an underdog working their way up the ranks, achieving success, and discovering who they really are. Another thing is that Part 1 and Part 2 are really two chapters in the story, and that fortunately meant that I didn’t lose as much as I expected by having such a large gap between viewing both halves. 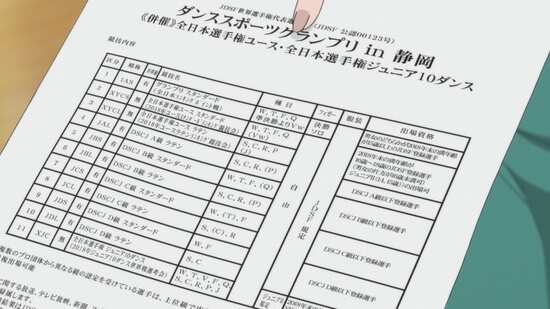 Part 1 was all about introducing Tatara to the world of competitive dance, and giving him the basic skills and the ambition to succeed, as well as introducing those characters that would no doubt serve as mentors as well as ultimate rivals. But as Part 2 begins, he needs more competitive experience before he can challenge those rivals, and more importantly he needs a dance partner to compete alongside. We met that partner at the end of the previous collection, a fiery red-haired girl named Chinatsu, who also goes to school with Tatara. She reluctantly teams up with him, and brings along a whole heap of baggage of her own to deal with. She loves dance, and has a whole lot more experience than Tatara, but she’s only danced competitively with her best friend Akira, and same sex partners are only allowed to compete until the end of Middle School. She’s only led, and has no experience of being led, which gives timid Tatara a whole heap of trouble. The two wind up arguing more than they do dancing, which makes for some entertaining, and emotional ructions on screen. 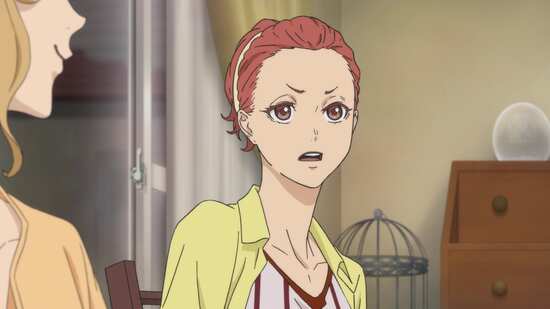 This is too much for their mentor Sengoku to handle, and he’s got competitions abroad to enter, so their dance education becomes the responsibility of Hyodo’s mother Marisa to bear, and her teaching is unconventional to say the least. At her dance studio they encounter another of her students, Kugimiya, and his partner. He’s a veteran dancer trying to make a comeback following a year of rehab after an accident, and he’s got an attitude and skills to match. At the same time, Chinatsu’ former partner Akira has found a man to dance with, and their friendship has soured somewhat into rivalry. 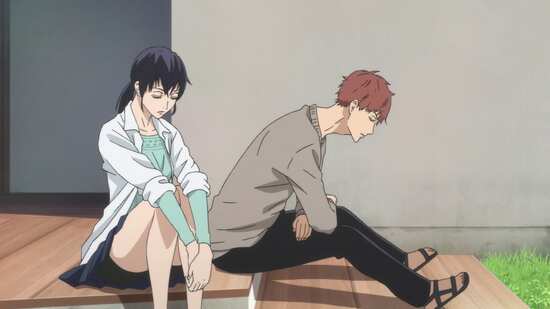 Ultimately this collection of episodes is more about Tatara and Chinatsu learning to dance together, and find a relationship; get their game on in time for the season ending tournament where they will compete with Akira and Kugimiya, and the final seven episodes are devoted to that. If they can succeed in this tournament, they’ll be ready to face Hyodo and Gaju (Tatara’s rivals and inspirations from part 1) at the same level, which of course means that this collection ends on one of those hopeful “please can we have another season” notes, which is usually denied, leaving fans to seek out the original manga or light novels as some sort of compensation. 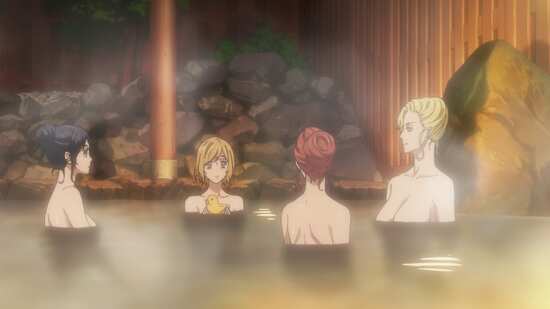 Welcome to the Ballroom is an irritating show. It invokes my need to criticise and nitpick like no other show I have seen, but I wind up enjoying every episode. The characters, clichéd though they are, make for entertaining and sympathetic figures, and the story is compelling enough for me to overlook the weak animation. All the Anime’s presentation of the show is uninspiring on disc, once you get past the Collector’s Edition accoutrements, but it is the only English language release to date at this time.